Football
News
The group of death returns on a Saturday to make your mouth water
Gary Maiden
23:55, 18 Jun 2021

Recovered from yesterday’s ‘Battle of Britain’?

There’s no time to sit back and look back on what was another memorable day of Euro 2020 action, as day nine is here with France and Spain in action either side of a crunch clash between Portugal and Germany. Here’s how a cracking Saturday of action is looking.

Reigning world champions France got their summer off to a winning start with an impressive 1-0 victory over Germany. N'Golo Kanté, as ever, covered every blade of grass as Paul Pogba showed his undoubted quality.

Hungary, who unexpectedly topped their Euro 2016 group containing Portugal, provide a different threat, but Didier Deschamps will know better than to underestimate the Group F dark horses. For 80 minutes they were more than a match for Portugal before succumbing late on, but they will fancy their chances at shocking the current world champions.

France haven’t been without their problems in the build up to this tournament, with Kylian Mbappe and Olivier Giroud exchanging jibes via the press. However, a win over Hungary will see the tournament favourites advance to the knockout stages, and their attacking flair is a match for anyone in the tournament. 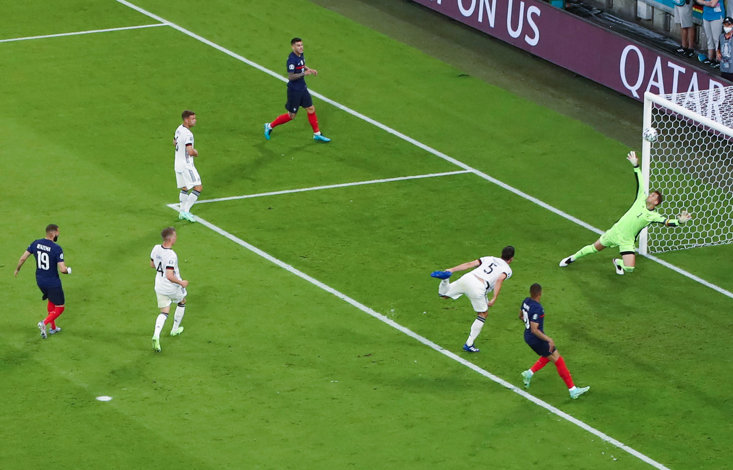 The game of the day sees Cristiano Ronaldo’s Portugal take on a Germany side who have repeatedly failed to beat the top sides in the world over the last few years. Ronaldo, rather than James Corden, was the star of Portugal's late late show against Hungary as they scored three goals in the final ten minutes to secure all three points.

For Germany, they couldn’t land a glove on world champions France in their opener and defeat here could leave them on the verge of their second group stage exit in the last two tournaments. Joachim Low is leaving at the end of the tournament to be replaced by former Bayern Munich manager Hansi Flick, and Low will not want to leave with a disappointing tournament after such a successful spell in charge.

Pass. Pass. Pass. Pass. But no end product. That just about summed up Spain’s 0-0 draw with Sweden as the hosts had 85% possession and 17 shots without finding the breakthrough. That puts huge pressure on Luis Enrique’s side ahead of their game against Poland and they will be hoping front man Alvaro Morata can find his shooting boots to get them off and running.

For Robert Lewandowski’s Poland, it could well be another underwhelming international tournament as they were reduced to ten men and lost 2-1 to Slovakia in their opening encounter. The Bayern striker didn’t get any opportunities to show his pedigree in front of goal while he is unlikely to get any more chances against a Spain side who look likely to dominate the ball once again.