England’s battling come-from-behind win over Spain in Wednesday’s Euro 2022 semi-final has the nation talking, and with increased success for the host nation comes greater attention on the remaining fixtures as Germany and Austria get set to do battle in the last eight on Thursday night.

The Lionesses’ 2-1 extra-time victory in Brighton saw some outstanding individual performances rewarded, with Millie Bright’s commanding display not just winning her the Player of the Match award but also leading to her name trending on Twitter right into Thursday morning. It is the latest sign that Sarina Wiegman’s side have captured the imagination of the entire country.

But while they await the outcome of Friday night’s clash between Sweden and Belgium in Tuesday’s first semi-final, there is a much-anticipated battle lying ahead in Brentford before then as old foes Germany and Austria come head-to-head.

Martina Voss-Tecklenburg’s Nationalelf are the clear favourites with Betfred at 2/7, but Austria’s performances in Group A suggest this could be a tight encounter from start to finish. Irene Fuhrmann’s side limited England’s chances in front of goal on opening night, limiting the host nation to a single goal from Beth Mead which barely edged beyond the goal-line. Moreover, they gave the Lionesses a number of scares, particularly in the early stages.

Austria then went on to beat Northern Ireland 2-0 before securing qualification for the knockout stage with a 1-0 win over a Norway outfit who, while reeling from their stunning 8-0 defeat to England, carried with them a whole array of attacking weapons. 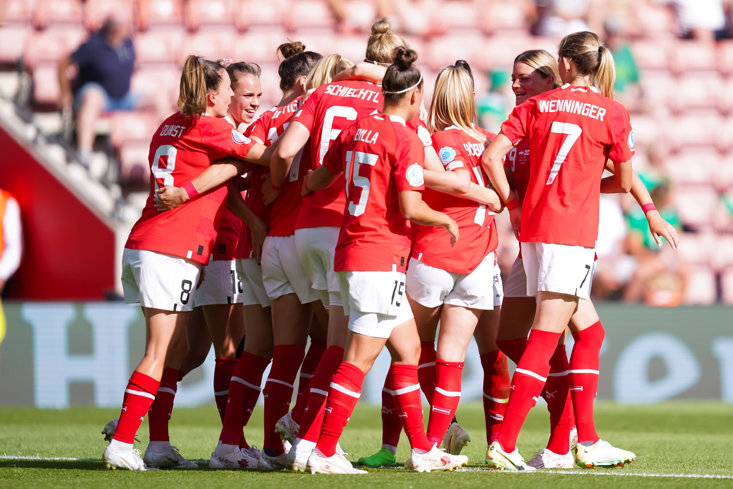 The expectation is that Fuhrmann will send her side out with a similar approach to the one which so nearly saw them take something off England, stifling the opposition for the most part while also looking to cause trouble through the likes of Sarah Zadrazil and Laura Feiersinger. They also have ace Arsenal goalkeeper Manuela Zinsberger in their ranks to help absorb any concerted pressure on their own goal.

Germany, like England, came through their group campaign with a 100-per-cent record and an unblemished defence. Their opening 4-0 win over Denmark was clinical, the 2-0 success over Spain next time out underlined their credential, and a 3-0 victory over Finland last time out will have given them a further boost going into the last eight.

But at the Brentford Community Stadium on Thursday night we will see if the eight-time former champions are ready to take their game up a level as the competition reaches its crunch final week. A convincing Germany performance would really have England and the other remaining sides looking over their shoulders.