Football
News
The two British clubs have avoided each other, but could meet in the final!
Simon Lillicrap
12:51, 18 Mar 2022

West Ham’s Europa League reward for an astonishing turnaround at the London Stadium last night is a massive quarter-final tie against Lyon. The French giants will provide another huge test for the Hammers, but having beaten Sevilla in the last round - a side that were targeting a home final in this competition, they will believe that anything is possible.

David Moyes' side have gone from battling relegation to playing in a European quarter-final and if they can make it past Lyon, a semi-final against Barcelona or Eintracht Frankfurt awaits.

Meanwhile Rangers, who beat Crvena zvezda 4-2 on aggregate after a thumping performance at Ibrox, will enjoy a Europa League quarter-final against Braga. On paper, this is a very winnable tie for Giovanni van Bronckhorst’s side, especially given the fact that they will play the second leg at home. Ibrox has been such an advantage for them this season and they will hope to use their vocal support to get into the last four.

Eintracht Frankfurt got past Real Betis in extra-time to rob their opponents of the chance to play a final in their host city and will play Barcelona, the favourites for the competition. Xavi’s resurgent Barcelona, featuring the likes of Pierre-Emerick Aubameyang, Adama Traore and Ferran Torres may not be used to playing in this competition but they got the job done against Galatasary in a difficult atmosphere and will be confident of progressing to the semi-finals. 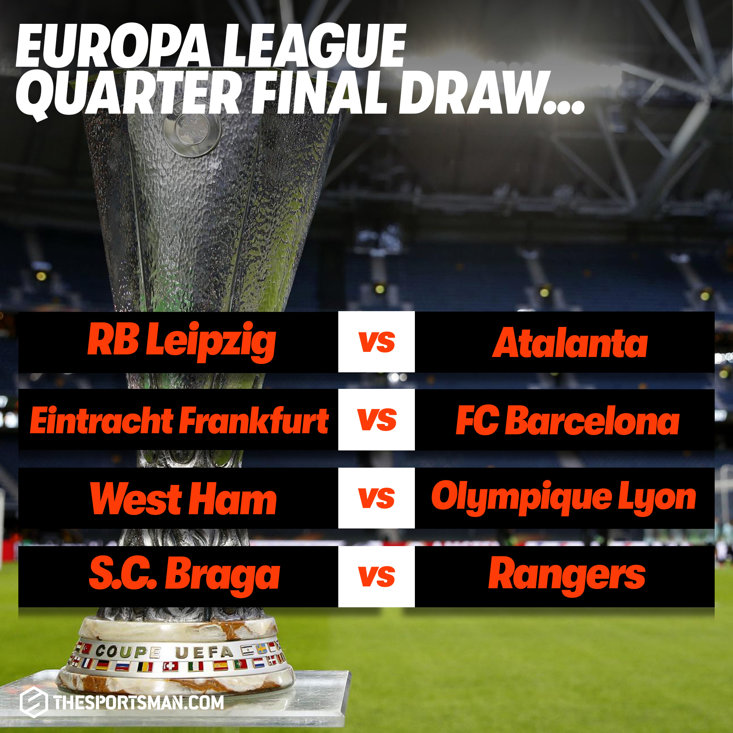 Atalanta who knocked out Bayer Leverkusen face a tough test as they take on RB Leipzig, who were handed a bye in the last round as they were due to play Russian club Spartak Moscow. The winner of this tie will face either Rangers or Braga in the semi-final as the Scottish giants have been handed a belting draw.

The European adventure continues for West Ham and Rangers!