Football
News
The Manchester United forward has had an extraordinary year during the Covid pandemic
Simon Lillicrap
08:57, 26 May 2021

European success will be nothing new to Marcus Rashford. Along with Paul Pogba and Juan Mata, he is one of three remaining members of the starting XI that beat Ajax in 2017 to lift the Europa League. On Wednesday night against Villarreal in Gdansk he returns to the same stage in the quest for another trophy.

Of course, it’s been a gargantuan five years for the English forward. It was the Europa League that provided him with his first chance in 2016 before his rapid rise through the ranks saw him lead the line in Stockholm, such was the faith both Louis van Gaal and Jose Mourinho showed in him.

But he was still just a teenager back then, finding his way in the world of football. He was talented on the pitch for sure, but we didn’t know much about his personality. Over the last year in particular, Rashford the boy wonder has grown into a man. He is still only 23 years old yet his wise head on young shoulders has seen him become a national treasure. How many other people can say they have forced the government into not one but two u-turns?

His campaign to make sure free school meals weren't halted during the summer holidays, in a year in which many families were struggling more than ever, showed great awareness for the political world around him. The open letter to the government, the work with FareShare and his continuous social media message eventually meant that 1.3m children received meals over the summer. All because of Rashford’s campaign - and he even had Boris Johnson on the end of the phone! 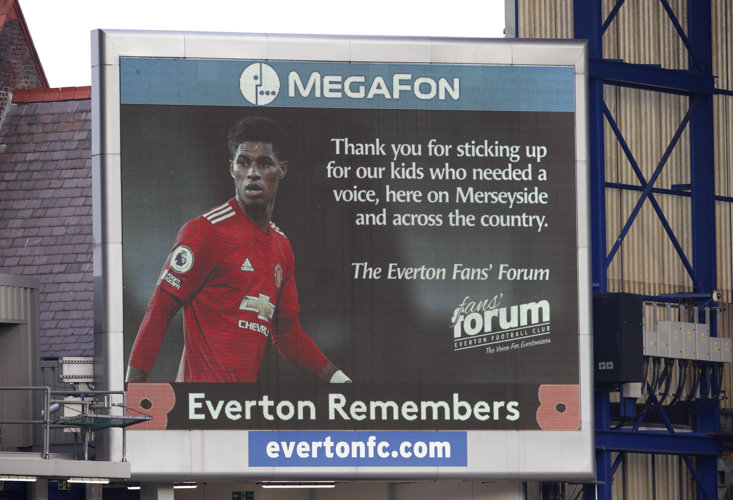 RASHFORD HAS RECEIVED PRAISE ACROSS THE BOARD FOR HIS HUMANITARIANISM

Vulnerable children across the country benefited from his perseverance and he was duly rewarded by becoming the youngest-ever person to be presented with an honorary degree, following in the footsteps of United legends Sir Alex Ferguson and Sir Bobby Charlton.

He was also given an MBE by the Queen for his services, but was forced to petition again for change as MPs voted against his plan to extend meals into the winter months. It worked. In an era in which people's power is more important than ever, Rashford mobilised the people and caused real change for good.

A host of other accolades followed, but Rashford knows the job is far from done, even launching a YouTube series where he attempts to teach people how to cook good food, while he learns himself. His maturity on and off the field has taken him to new heights, and he is now a vital component of both Ole Gunnar Solskjaer’s Manchester United side and Gareth Southgate’s England squad.

On the pitch, Unai Emery’s Villarreal now face the tricky task of stopping Rashford in his tracks. His pace, power and finishing ability are sure to play a major part as Solskjaer strives to win his very first trophy as United manager. Raising the Europa League aloft on Wednesday night will only add to the collection of awards Rashford has claimed over the past 12 months, but it is his work off the field that defines him as a character.

When Rashford sets his mind to something, he makes it happen. The Prime Minister couldn’t stop him and Conservative MPs tried to vote him down, yet he still came out on top. The role model of a generation is a 23-year-old black man from Wythenshawe, and that alone is an achievement worthy of the highest praise. The Europa League trophy would provide the crowning glory in his most spectacular of years.