Football
News
It been three decades since one of the greatest shocks the sporting world has ever seen
Joe Baiamonte
11:00, 26 Jun 2022

“Our sponsors were not prepared for us to go, so what we had was the Under-21s kit. When you look at the first game against England, every single one of us are in shirts and shorts that are a little bit too tight for us.”

Reading the above quote from Peter Schmeichel, you would be forgiven for believing it to be an embarrassing memory, remembered by a player who would much rather forget what happened to him and his compatriots during the European Championships of 1992. A nation of just over five million, only playing football professionally for 14 years by this point, just happy to have qualified and turning up to be routinely dismantled by their superior opponents who could boast excesses of talent and organisation.

Instead, it is a prelude to the most unlikely European Championship victory of all time. Sorry Greece.

While what Otto Rehhagel’s charges achieved in 2004 was staggering beyond belief, they had actually successfully qualified for the tournament in Portugal. Twelve years earlier, the Danes had not even managed this feat. In fact, it was not until 10 days before Euro ’92 commenced that Richard Møller Nielsen and his team even knew they would be contesting for the honour of being crowned champions of Europe along with seven of the continent’s top nations.

While Nielsen was mapping out a summer of home renovation (the instillation of a new kitchen atop his to-do list) following what he assumed would be his P45 from the Danish FA, UN Security Council Resolution 757 saw Yugoslavia, one of the tournament favourites, disqualified as the Yugoslav wars intensified. It had been the likes of Mijatovic, Jarni, Savicevic, Prosinecki, Boban, Jugovic, Suker and Pancev that had left the Danes clutching their Factor 30, furiously skimming through holiday brochures as they sought summer excitement away from what would be happening just over the border in Sweden.

Whereas the ‘Plavi’ were a country in the throes of a footballing awakening, five years removed from a World Youth Tournament triumph in Chile and only 12 months on from Red Star Belgrade conquering the continent at club level, Denmark were a shell of Sepp Piontek’s 1986 ‘Danish Dynamite’ vintage.

To make matters worse, under Nielsen the Danes had lost the mercurial talents of Michael Laudrup. The languid orchestrator of some of his country’s finest hours on the international stage wanted nothing to do with Nielsen’s defence led approach. There was no Preben Elkjaer, no Soren Busk or Frank Arnesen, no Soren Lerby or Jan Molby. And judging by Denmark’s pre-tournament friendly display, there was absolutely no form or confidence either. 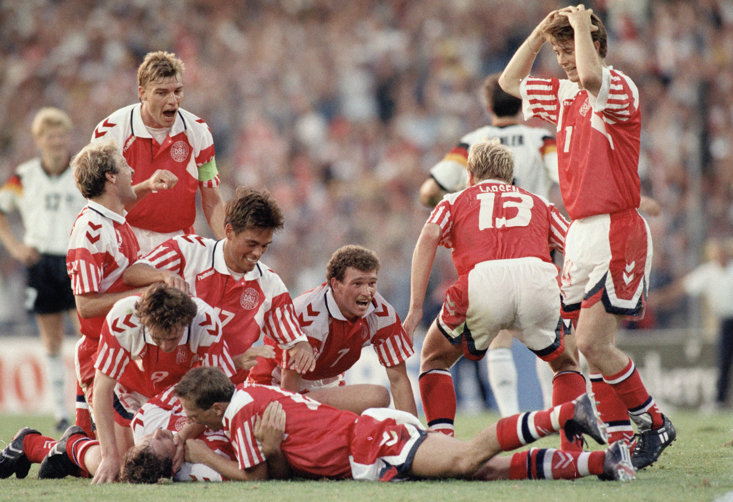 “We got booed off the pitch because we played so badly,” the former Arsenal man remembered.

“We have a saying here in Denmark, that when you play indoor football it is three games, then a shower, then home.

“We had that attitude before Euro 92. That we were just going to play these three games then go back to planning our holidays, relaxing on the beach or wherever it was going to be.”

Only the holiday planning would have to wait. An opening round goalless draw against England hinting to Schmeichel and co that, in fact, they might be in Sweden to more than merely make up the numbers in Yugoslavia’s absence. A narrow 1-0 defeat to the host nation followed, however, threatening to crush the revival before it had time to blossom into a revival of the heroics of ’86 and ’84.

The final round of group fixtures left the Danes, without a victory at the Championships since 1984, up against a France side boasting the likes of Papin, Cantona, Blanc and Deschamps. Only a victory would suffice and, even then, Denmark were reliant on Sweden not losing to England in order to advance.

Against the odds and with the help of a healthy dose of ‘French arrogance’ as Flemming Povlsen labelled it after the game, the Danes advanced to the semi-finals. Lyngby midfielder Henrik Larsen, an unfancied inclusion, opened the scoring after just eight minutes. A Papin equaliser but Nielsen’s men on the brink before the manager who should have been fixating on which taps would look best in his new kitchen sink pulled off a masterstroke. Replacing Laudrup with Lars Elstrup, who promptly bagged the winner in the 78th minute with his first touch of the ball.

Cue the Netherlands. Van Basten, Rijkaard, Gullit, a young lad by the name of Bergkamp.

An 86th minute Rijkaard effort levelled the scores at 2-2 and, with nothing to separate the two teams after extra time, penalties were to decide who met the recently reunited sides of East and West Germany in the final.

Schmeichel vs van Basten. Winner: The great Dane. Eight years on from heartbreak from 12 yards against Spain, the nation that were not even supposed to be at the tournament in the first place were now 90 minutes away from being crowned champions of Europe.

But it’s Germany in the final. The ultimate killjoys. See that feel good story you were having? Well they’re going to stuff it in a locker like some punk jocks harassing the nerds in an American high school sitcom. Don’t come round these parts with your miracles and fairytales. Die Mannschaft were reigning World Champions and Denmark were some upstarts flung into the competition by a UN ruling. We were about to see Drederick Tatum vs Homer Simpson played out in a major international football final.

Or were we seeing Buster Douglas vs Mike Tyson?

Even Germany and their rampant, incessant need to remind everyone of how ruthlessly excellent they are at football, more often than not, couldn’t deny this most preposterous of underdog stories. Jensen thundered home an Exocet of an opener in the 18th minute. Then came Kim Vilfort. The midfielder who’s daughter had been battling leukaemia. Vilfort had travelled back to Denmark to be with her during the tournament, where she would insist to him that he play rather than remain at home.

Vilfort didn’t just play. He scored the goal that won the whole thing. With just 12 minutes remaining, the Brondby attacker went down in Danish football folklore as the man who delivered their most unimagined of dreams. The Ullevi Stadium in Gothenburg half euphoria, half shellshocked disbelief. Bodo Illgner in the German goal couldn’t comprehend what had just happened, nor could Jurgen Klinsmann, so often denied by Schmeichel at the other end of the field.

Tragically, Vilfort’s daughter Line, who had convinced him on his visits back home during the tournament to persist and help the Danish effort, would lose her battle with leukaemia only a few weeks after her father’s finest hour.

It was a finest hour the likes of which we may never see again. Because while Schmeichel et al may not have exactly been as ‘Dynamite’ as their predecessors in the ‘80s, they exploded on the international stage in much more spectacular and memorable fashion.