Football
News
The Catalan giants can go top of the table this week
Elliott Bretland
11:09, 26 Apr 2021

Barcelona can gain control over Real and Atletico in Spain, Bayern have been forced to wait, PSG could lose out to Lille or Monaco and Juventus may have to play in the Europa League next season. Here is this weekend's round-up from Europe's top leagues.

Barcelona have been able to wrestle the steering wheel from Atletico Madrid and are now fully in the La Liga title race driving seat. The Catalan giants came from behind to defeat Villarreal 2-1 courtesy of an Antoine Griezmann brace which proved huge as Diego Simeone’s league leaders lost at Athletic Bilbao. Former Manchester City defender Stefan Savic equalised for Atleti on 77 minutes but the hosts sealed the win with just four minutes to go through Inigo Martinez.

Those two results mean Lionel Messi and Co will move to the top of the table if they win their game in hand against Granada on Thursday. Real Madrid, meanwhile, will be left ruing a missed opportunity after they were held at home by Real Betis. Sevilla’s triumph over Granada on Sunday put them on 70 points, three behind Atletico. With five games to go, this four-horse race could go right down to the wire.

While things are looking tasty at the top in Spain, it looks like we’ll have a brilliant end to the Ligue 1 season too with the top three separated by just two points with four matches to go.

Lyon, who are fourth, had been right in the mix at the start of the weekend and were in full control against Lille on Sunday, leading them 2-0 after only 35 minutes. However, the visitors fought back to reclaim first place, as veteran Turkey striker Burak Yilmaz scored the winner on 85 minutes.

PSG, who have won seven titles in the last eight years, are second and a point off the top after defeating Metz 3-1 away from home. Kylian Mbappe was at the double before Mauro Icardi made sure with a penalty in the 89th minute. Monaco, third and two points off first, left it late as Wissam Ben Yedder netted the only goal of the game to defeat Angers and keep in touch with those above them. 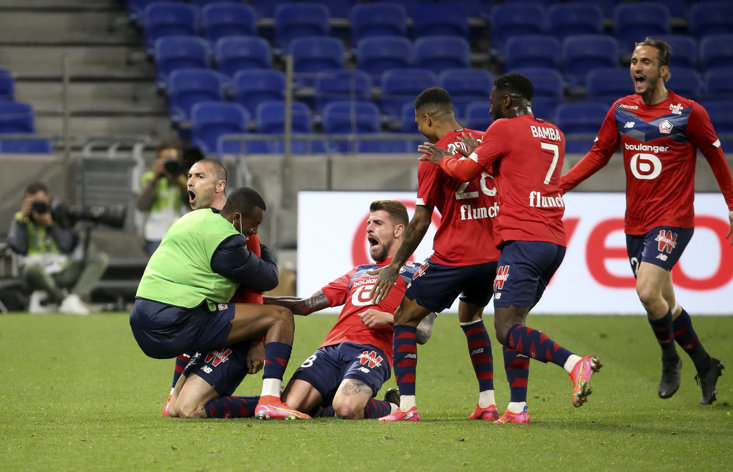 Bayern's Champagne Is Put On Ice

Bayern Munich missed out on the chance to clinch the Bundesliga title after a surprise 2-1 defeat at Mainz. Jonathan Burkardt put the home side ahead on three minutes before Robin Quaison doubled their advantage. The Bavarians toiled but had to wait until the 94th minute for Robert Lewandowski to strike and there was no time left for an equaliser.

RB Leipzig, who are the only team who can halt Bayern, kept the title race alive by moving seven points off the top with three games after beating Stuttgart 2-0. Borussia Dortmund, meanwhile, earned a massive victory in their pursuit of the top four, winning 2-0 at third-placed Wolfsburg to move two points behind the Wolves. Despite England international Jude Bellingham picking up the first red card of his senior career after receiving two yellows, BVB battled hard as Erling Haaland scored twice.

In Italy, Inter took another huge step towards sealing their first Serie A title in eleven years as former Manchester United defender Matteo Darmian struck to earn a 1-0 win against Verona. The Nerazzurri are now eleven points clear with five games to go.

With Milan not playing Lazio until Monday night, Atalanta jumped up to second place with an emphatic 5-0 win over Bologna. Juventus hopes of finishing in the top four are hanging by a thread after they could only draw at Fiorentina. If Napoli win at Torino on Monday, Andrea Pirlo’s men will slip to fifth.