Zlatan Ibrahimovic is still going strong at 40 years of age, Real Sociedad are still sitting on top of La Liga, Paris Saint-Germain are eight points clear at the top of Ligue 1, and Bayern Munich bounced back from their DFB-Pokal exit with a five-goal haul of their own. Here is what went on in Europe this weekend.

There was plenty happening in Italy this weekend. Veteran striker Zlatan Ibrahimovic showed once again that age is just a number as the 40-year-old rifled in a free-kick for AC Milan in their 2-1 defeat of Roma at Stadio Olimpico. The result marked Jose Mourinho’s first ever home defeat in the top tier of Italian football. The visitors were reduced to 10 men as Theo Hernandez accumulated two yellow cards, but they held on to keep up the pressure on Napoli.

The Partenopei held on to top spot, although they are level on 31 points with Milan after securing a 1-0 victory over Salernitana. Piotr Zielinski scored a scrappy goal to keep the league leaders in top spot but both sides were reduced to 10 men in the second half. The hosts lost Grigoris Kastanos and Kalidou Koulibaly was sent off for Napoli seven minutes later. Reigning champions Inter Milan secured a 2-0 victory over Udinese, but they find themselves seven points behind Napoli and bitter rivals Milan.

There was more frustration for Massimiliano Allegri and Juventus as the Turin club were dealt their fourth defeat of the season as they lost 2-1 away to Verona. Weston McKennie scored a consolation for the Old Lady but Giovanni Simeone’s four-minute brace was enough to claim the three points as they leap-frogged Allegri’s side in the table to move up to eighth. Juventus mark their 124th anniversary on Monday but sit 16 points adrift of Napoli with little to celebrate.

League leaders Real Sociedad maintained their spot at the top of the table with a 1-1 draw at home to Athletic Bilbao, who were reduced to 10 men in the final 10 minutes of the game. Swedish striker Alexander Isak converted a penalty just before the hour mark, but the visitors were able to rally after Inigo Martinez’s dismissal as Iker Muniain rescued a point in added time.

Real Madrid registered a 2-1 away victory against Elche, who were also reduced to 10 men. Vinicius Jr’s brace was enough for Carlo Ancelotti’s side to keep the pressure on the league leaders, with Pere Milla’s late goal just a mere consolation. Madrid will look to capitalise on Sociedad’s failure to win as they have a game in hand over Imanol Alguacil’s side.

Barcelona played their first game since Ronald Koeman was sacked but were held to a 1-1 draw by Alaves at Camp Nou, Memphis Depay’s opener being cancelled out just minutes later by Luis Rioja’s strike, which capped off a prime Barca-esque move. The game was overshadowed by Barca striker Sergio Aguero having to be taken to hospital after he was struggling to breathe on the pitch. He was later diagnosed with arrhythmia.

Reigning champions Atletico Madrid had a comfortable 3-0 victory over Real Betis at the Wanda Metropolitano. 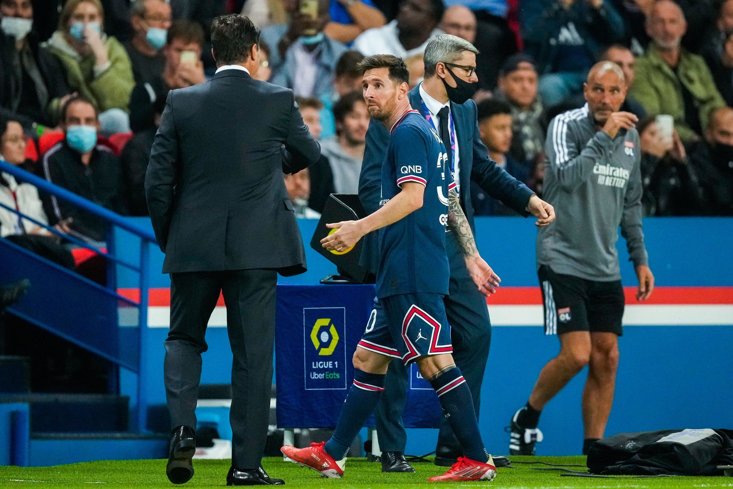 Mauricio Pochettino’s Paris Saint-Germain extended their lead at the top of the table to eight points with a 2-1 victory over Lille at the Parc des Princes. Lille went into the half-time break with the lead, with Poch choosing to withdraw Lionel Messi as a result. The hosts dug deep and fought their way back into the contest with captain Marquinhos stabbing home before Angel Di Maria fired in the winner.

Bayern Munich maintained their position at the top of the table as they bounced back from their heavy 5-0 defeat at the hands of Borussia Monchengladbach in the DFB-Pokal in midweek. They scored five of their own in defeating Union Berlin 5-2 away from home with Robert Lewandowski scoring a brace.

They are closely followed by Borussia Dortmund, who are just one point behind with 24 after they defeated Koln 2-0 at home. Freiburg remain in third after a 3-1 home victory over Greuther Furth, and Monchengladbach secured a 2-1 victory over Bochum at Borussia-Park. Wolfsburg recorded their first victory since they parted ways with Mark van Bommel as they won 2-0 away to Bayer Leverkusen with 10 men.

Erik ten Hag’s Ajax were held to a 0-0 stalemate with Heracles meaning their title rivals PSV Eindhoven were able to reduce the Amsterdam side’s lead to two points with a 5-2 home victory over Twente.