As the Premier League caught fire with a thrilling game at Anfield, there were a whole host of shocks in Europe. Here’s what happened on a surprising weekend on the continent.

Atletico Madrid’s 2-0 win over Barcelona at the Wanda Metropolitano hardly constitutes a shock given the current strength of Ronald Koeman’s side, but we did get to see Luis Suarez score against his former club. Letting the Uruguayan leave was one of a catalogue of mistakes Barca have made over the past few years, and he made the pay with a smart close-range finish to seal the points.

One shock did occur as Real Madrid lost their first league match of the season to Espanyol, 2-1. Goals from Raul de Tomas and Aleix Vidal were enough for the hosts, with that result seeing both Madrid clubs level on 17 points. They are joined by surprise package Real Sociedad, who rescued a point at Getafe in a 1-1 draw but missed out on the chance to go top of the league.

Real Madrid are 5/6 to win La Liga with Betfred

If Real Madrid’s loss was a big one, PSG’s was seismic. They were well-beaten by Rennes, who won 2-0 to hand PSG their first loss of the season. Heading into this one, the Parisians had won eight from eight, but this defeat at least proves to the rest of the league that they are mortal.

Lens continued their strong start to the season with a 2-0 win over Reims which puts them six points behind the league leaders, while Nice beat Brest to go into third and a 93rd minute winner from Stephane Bahoken took Angers into the top four.

Perfect Napoli. Luciano Spalletti’s side made it seven wins from seven despite going one goal down to Fiorentina. Goals from Hirving Lozano and Amir Rrahmani turned the tie around and Napoli are sitting pretty at the top of the league. 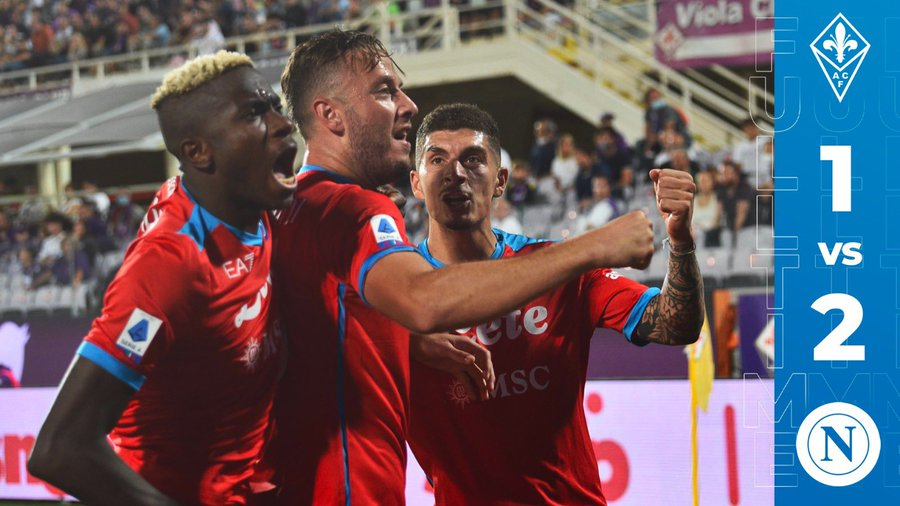 AC and Inter Milan both kept the heat on the league leaders however with wins of their own. Despite a late comeback from Atalanta, AC Milan held on to secure a 3-2 win while Inter also relied on a comeback as Edin Dzeko secured all three points from the spot at Sassuolo.

Bayern Munich losing at home? This truly was a weekend of European shocks. The team that have dominated German football for the past decade were beaten 2-1 at home by Eintracht Frankfurt. Frankfurt hadn’t won all season and went 1-0 down, but miraculously fought back as Filip Kostic scored a late winner.

That defeat allowed Bayer Leverkusen to draw level on points with them, as they beat Arminia Bielefeld 4-0, while Dortmund and Freiburg also closed the gap with 2-1 wins.

If all of those shock results weren’t enough for you, then Eredivisie champions Ajax also chose this weekend to lose their first of the season. They were beaten 1-0 at home by third place Utrecht and with PSV closing the gap in second, we could be in for a thrilling title race.