Football
News
Two unlikely champions were crowned this weekend as a German giant was relegated
Simon Lillicrap
09:00, 24 May 2021

All over Europe domestic leagues came to their thrilling finale as champions were crowned on the final day in France and Spain. There were a whole host of stories to discuss, but we’ve tried to do our best in the final European round-up of the season.

Atletico Madrid won their second La Liga title this century on a nervy final day in Spain. Both title chasers from the Spanish capital found themselves 1-0 down at half-time but as Real Madrid turned things around with two stoppage time goal, Diego Simeone’s side also had to win.

Angel Correa equalised for Atleti before the key man, Luis Suarez was played through one on one. One of the finest strikers in world football, sold by Barcelona for just £6.3m last summer, finished with aplomb to make it 21 goals for the season. It may just be the worst transfer decision in football history, handing a star player to your title rivals for a pittance. Atleti won 2-1 to secure their first title since 2014, and Simeone celebrated.

There never used to be a ‘big three’ in Spain. It is down to him that Barcelona and Real Madrid are now playing catch-up once again.

Lille pulled off one of the shocks of the season as they secured the Ligue 1 title with a 2-0 win over Angers. Turkish striker Burak Yilmaz has been involved in 21 goals in just 23 league starts this term and scored the second goal in the 2-1 win from the penalty spot to end PSG’s run of seven titles in eight seasons.

They kept an incredible 21 clean sheets to win their first title in 10 years, the fourth in their history. Their starting 11 is worth just £66m, which is dwarfed by their title rivals PSG, who paid three times more than that for Neymar alone.

This was Christophe Galtier’s greatest managerial achievement as he joined Lille in 2017 having spent eight years at St Etienne. They finished in fourth last term, 29 points behind champions PSG and now, Galtier has a job for life with Les Dogues. 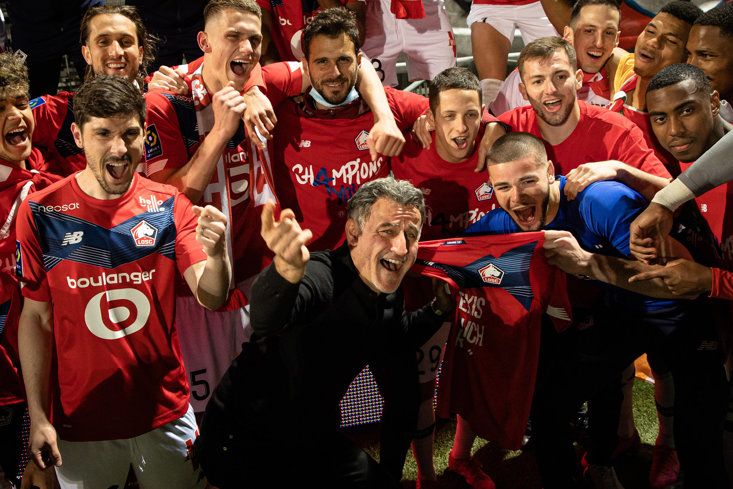 Inter Milan may have wrapped up the Serie A title a few weeks ago but there was still drama at the top of the table as three teams battled for two Champions League spots. Milan got the win they needed at Atalanta to leapfrog them into second place, but both would qualify for the Champions League which just left Napoli or Juventus to take fourth spot.

Napoli knew that a win would be enough to keep them above Juve, and as Andrea Pirlo’s side beat Bologna 4-1, Napoli crumbled. Gennaro Gattuso’s side went 1-0 up at home to Verona but Davide Faraoni pegged the hosts back and as Napoli couldn’t find the breakthrough, that goal ultimately cost them Champions League football. It’s been a woeful season for Juventus, and Cristiano Ronaldo’s future looks uncertain, but he is now less likely to leave with the club in the Champions League once again.

The top of the table was all wrapped up in Germany, with Robert Lewandowski scoring 41 goals in 29 games for champions Bayern Munich, so attention turned to the relegation scrap at the bottom of the table.

Werder Bremen, who have featured in more Bundesliga seasons than any other club and were one of the original clubs in 1963, flopped on the big stage. They went 4-0 down to Monchengladbach before staging a mini-comeback, but it wasn’t enough, as Koln got the 1-0 win they needed over bottom club Schalke. The green-whites were relegated to the Bundesliga 2 for just the second time in their history.