Football
News
The Bayern Munich striker's stats over the years speak for themselves
Conor Keane
10:21, 19 Nov 2021

The world is running out of superlatives to describe the incredible Robert Lewandowski. The Polish striker is one of the greatest goalscorers to have ever graced a football pitch and his numbers over the years speak for themselves.

Last year, he was cruelly denied the chance to claim his first Ballon d’Or award thanks to the arrival of Covid-19, but there have been few better, and more consistent, forces in front of goal than the Bayern Munich star in recent years.

Lewandowski last season eclipsed the late Gerd Müller’s Bundesliga record for most goals in a single campaign with a staggering 41. His record-breaking term, which saw him net 48 in total across all competitions, earned him the prestigious European Golden Shoe for 2020-21.

His explosive start to that season, including his form from the season before in 2020, saw him end last year as the highest scoring player in Europe for a second year running with 47 goals – less than his 54 in 2019. He helped fire Bayern to a beautiful treble, while he scooped up the UEFA Men’s Player of the Year and Best FIFA Men’s Player awards. If it had not been for the pandemic, Lewandowski would have certainly become the second player since 2007 to win the Ballon d’Or not called Lionel Messi and Cristiano Ronaldo.

Lewandowski has been rather unfortunate to have been a part of this glorious era of football, with the mind-blowing exploits of Messi and Ronaldo’s intense professional rivalry sometimes overshadowing the striker’s own greatness. What is also quite unbelievable is the fact that the 33-year-old has never made the top-three shortlist. While you cannot discredit the eminence that the other two have blessed the world with within this emphatic era, Lewandowski is one of the few individuals to count themselves unfortunate to not have received as much of the spotlight when the greatest players of this generation have been discussed. Supporters and the media have always fixated on Messi and Ronaldo which has allowed the accomplishments of Lewandowski to go underappreciated.

For example, he came into Bayern’s side and the two parties instantly benefitted one another - as the forward got better, so did the German giants. And this fruitful union has seen Lewandowski contribute toward seven consecutive league titles in Munich, as well as five DFL-Supercups, three DFB-Pokals, one Champions League, one Super Cup and one Club World Cup. 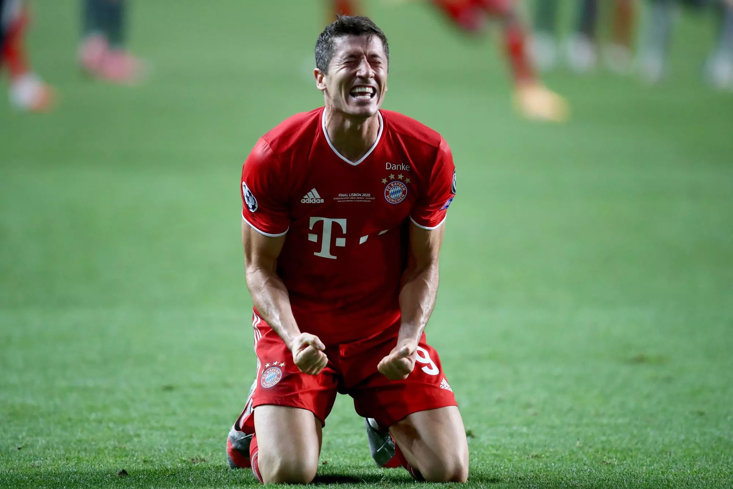 In his seven full seasons at Allianz Arena, Lewandowski has only had one season where his goal tally was below 40, and that was his debut year (25). Ever since then, the striker has evolved into a frightening goal machine, but the signs were there when he was the frontman at Borussia Dortmund. Who could forget that world-class performance in the 2012-13 Champions League semi-final where he put four past Real Madrid at Signal Iduna Park?

Another frightening performance from the Warsaw-born poacher was in the infancy of his second term at Bayern where he scored five goals in nine minutes against Wolfsburg, further enhancing his reputation as one of the world’s elite footballers.

As he finally got his hands on his first Champions League title in 2020, he took extra pride in that achievement having scored and created the most goals in the competition to claim the Bavarians their sixth European crown - some consolation for not receiving a Ballon d’Or for his excellence that year. Presently, he has scored 62 goals this calendar year and many of his fans are hoping he justly gets his hands on the award to add to his already glowing CV this time around. The last time this feat was achieved was in 2014 by Ronaldo, and he ended up winning the award that year. It further highlights the struggle for top players among this generation to stand out of Ronaldo and Messi’s shadows, but Lewandowski has become an icon in his own right.

He faces a tough battle for this year’s Ballon d’Or with Messi finally winning his first international trophy as Argentina won the Copa America for the first time in 18 years, and the 34-year-old was instrumental in their triumph. Regardless of whether Lewandowski will add a Ballon d’Or to his career highlights, he will truly have one of the greatest careers from a striker that the beautiful game has ever seen. It may just take time for some people to really appreciate his brilliance.