Football
News
If anyone has an excuse to feel jaded it is the grandad of world football, Cristiano Ronaldo
Andrew Dillon
14:05, 10 Jun 2022

Somebody seems to have forgotten to tell Cristiano Ronaldo he should be knackered. Because elsewhere in the much-derided Nations League players are supposedly running on fumes.

England captain Harry Kane for instance is so shattered he finds it impossible to stay on his feet every time he shuffles into the opposition box.

Fatigue from the punishing Premier League season has been classified as the reason why England’s overworked squad has been finding it hard going in the latest mini-series of internationals.

Defeat in Hungary followed by salvaging a late draw from the penalty spot against Germany tell-tale signs that the Three Lions are toothless after so many games in the domestic calendar. But if you turn your TV over to Premier Sports 1 and there you’ll find an evergreen Ronaldo haring around in a Portugal shirt like a kid riding a sugar high.

If anyone has an excuse to feel jaded it is the grandad of world football. At 37 he has more than five years on England’s current oldest player, Kyle Walker. He has also had to endure Manchester United’s worst season for decades, witnessing the kind of football to drain the spirit of anyone with half a brain, let alone one of the most artistic players of all time.

Tireless Ronaldo racked up an impressive 48 games for club and country, first suffering the wild inconsistencies of Ole Gunnar Solskjaer followed by seven months among the dead men walking under Ralf Rangnick. Walker played a relatively modest 37 games spread fairly evenly from August through to May.

Tuesday’s fortunate draw in Germany was the 60th outing of an admittedly long campaign for Kane. His even more lucky penalty goal was his 39th since August. Ronaldo scored 31 in roughly the same period. The only player worth paying to watch at Old Trafford last season can look both these much younger men in the eye when it comes to durability. 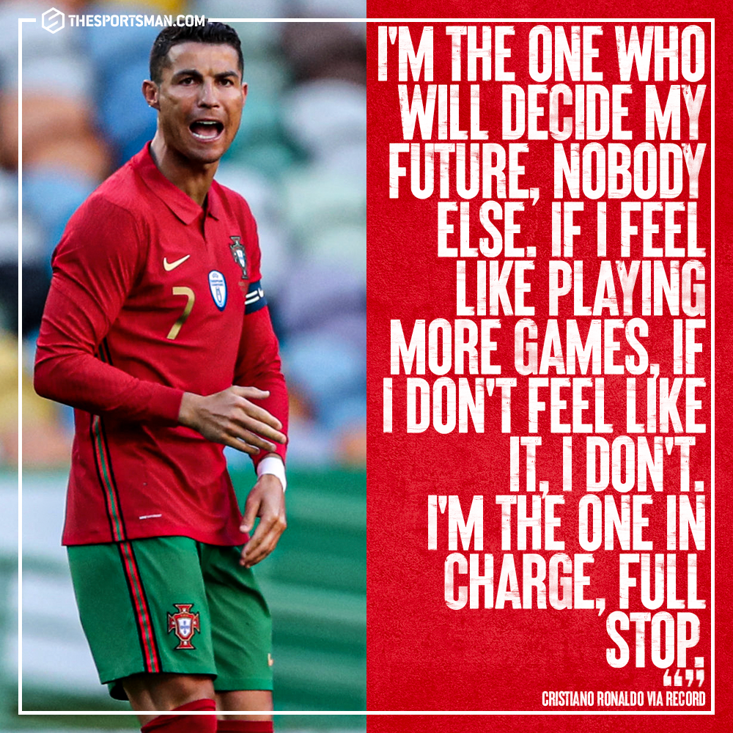 Portugal have played three games so far in this current episode of the Nations League. Ronaldo has played all but 28 minutes and scored twice in four minutes during a resounding 4-0 thumping of a fancied Switzerland side at the weekend. And you won’t find him reaching for the fatigue get-out clause even when he is one day carried off a pitch in a wooden box.

Players do get tired, of course. But players like Ronaldo refuse to listen and just keep on keeping on. Former Arsenal midfielder Brian Talbot played 70 games in the 1979/80 season. On pitches so wet and muddy small children could be sucked from view if they dared run on from the terraces.

European competition in the old Cup Winners Cup, pushing for the League and the price of success playing for a team which was a dominant force at the time meant a terrifying schedule. Arsenal played six semi-finals in 22 days in various cups - three against Liverpool alone in the FA Cup. Both clubs refused the Football Association’s offer to settle the tie on penalties. And don’t forget there were 22 teams in the old First Division then too.

Talbot soldiered on through the lot of it and once told me the secret to his stamina that season was simple. Arsenal’s team bus would drop the players off at a pre-arranged pub on the way home from away games. And there they would enjoy a couple of beers and fish and chips.

You can’t imagine Ronaldo sitting down in the Snug of a smoky boozer with a pint of mild and battered haddock, but each to their own.

Yet he too agreed that the worst thing for tiredness is to admit it.  Ronaldo is out on his own in terms of attention to detail and the extreme regime he follows to stay in the best shape possible.

At one point during the early days of his first spell at Manchester United he complained of stomach pains. The issue was baffling club doctors until it emerged the dedicated youngster was performing 1,000 sit ups a day. There are some players who would be walking doubled-up if they tried that just once and Ronaldo should come with a public health warning.

When my kids were younger, on the frequent occasions I told them it was late and they should be tired, they simply ignored me and continued smashing up our house. If only England’s current crop of footballers did the same we might win a match or two.