Football
News
The Toffees and Spurs meet in the Premier League at Goodison Park on Friday night
Elliott Bretland
14:00, 16 Apr 2021

The games have come thick and fast and now we’re entering the business end of the season where every point seriously counts. It’s that time of the year when teams get clarity. They can focus, knowing they can still finish in the top spots while others will soon get the flip flops out, knowing their dreams and ambitions will have to wait for another twelve months.

For Sheffield United, they will be relegated this weekend should they lose at Wolves and other results go against them. Fulham know a shock victory at Arsenal will keep their hopes of staying up alive for a while longer while Newcastle are well aware beating West Ham would pull them closer to safety.

When Everton and Tottenham meet on Friday night, both clubs know it is likely win or bust when it comes to their faint Champions League aspirations. The two Premier League ever-presents meet at Goodison Park having dropped priceless points in recent weeks.

While the Toffees are winless in four, dropping two points late on at home to Crystal Palace before a goalless draw at Brighton, Spurs conceded in the 85th minute to share the spoils with Newcastle before losing at home to Manchester United. Everton have a game in hand against Aston Villa to play but as things stand, Carlo Ancelotti’s men are seven points off fourth and Spurs are six points behind that coveted spot. 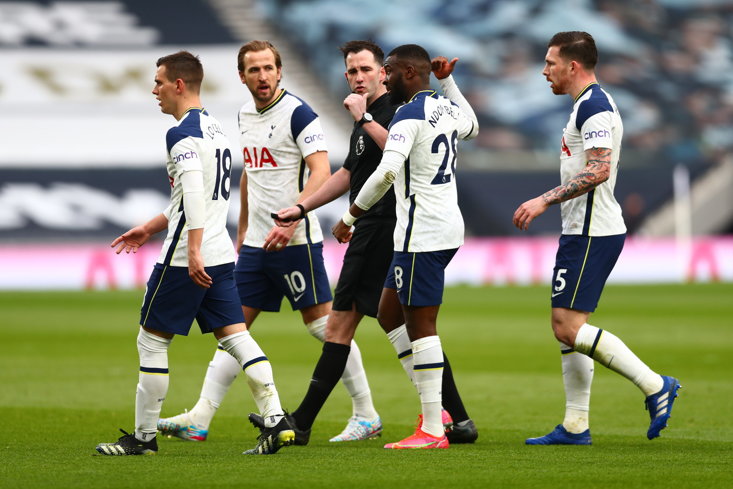 TOTTENHAM AND EVERTON HAVE BOTH STRUGGLED IN APRIL

It’s a huge game as Everton and Tottenham try to keep their campaigns alive with only seven games to go for the majority of the Premier League. It’s the Merseysiders who have been top dogs in this season’s fixture, winning 1-0 in north London on the opening day of the season before dumping Jose Mourinho’s team out of the FA Cup with an enthralling 5-4 extra-time triumph. However, they have won just once on home soil since, losing at home to Burnley and Fulham.

The Toffees pursuit of the top four has been meek to say the least since the turn of the year. Topping the table in the very early stages of the season, Everton have had opportunities to get into the top four in the last three months but have fluffed their lines every time. Spurs, meanwhile, have been off the pace and faltered throughout the season. Taking the lead against the Red Devils on Sunday, they were beaten 3-1 and have thrown away 18 points from winning positions.

Despite needlessly dropping so many wins for draws and defeats this campaign, Everton and Tottenham are still, somehow, in reach of the top four, mathematically at least, though even if they go on a run, they will be relying on the high-flying Hammers, Chelsea and Liverpool dropping points too.

One thing is for sure, lose on Friday, and Everton or Tottenham will almost certainly be out of the top four race.

While Spurs would likely settle for a place in the Europa League during a state of flux, it would still be seen as a backwards step having reached the Champions League final in 2019. For the Toffees, Champions League qualification is on the agenda but perhaps further down the line, in two to three years, when Ancelotti has had more time to get the Goodison house in order. They are perhaps only in the mix now thanks to their strong early season form and the failure of those above them to really pull away. For now, Europe’s second competition would suit Everton perfectly as they look to build and grow.

If either want a fast-track to success by qualifying for the continent’s top competition, well, this next game really is win or bust.