Football
News
The race for a spot in Europe next season is heating up after the Toffees beat West Ham 1-0 at the London Stadium
Kieran Spratt
18:50, 09 May 2021

Everton claimed an important win in the hunt for a place in Europe next season, edging a below par West Ham in a 1-0 win at the London Stadium on Sunday courtesy of sole Dominic Calvert-Lewin goal.

With the hard-fought win, Carlo Ancelotti’s men now move three points behind the fifth-placed Hammers with a game in hand (although they are some way behind when it comes to goal difference), whilst West Ham, still in the hunt for an unlikely top four finish themselves, remain five points behind Leicester with three to play.

With so much to play for, it was a cagey affair in east London with only Calvert-Lewin’s first-half strike splitting the two. He took the lead on 24 minutes after latching on to a sublime pass from Ben Godfrey, before beating Craig Dawson and drilling a low shot past Lukasz Fabianski.

That goal was the England international’s 16th Premier League goal of the season, the joint-most in the competition by an Englishman for Everton, joining Tony Cottee in 1993/94. Only Bruno Fernandes, Mo Salah and Harry Kane have scored more Premier League goals since Ancelotti took charge of Toffees.

West Ham dominated for large portions of the match, particularly the second-half, and David Moyes’ side could and should have got themselves on the scoresheet on a couple of occasions. In the first-half, Pablo Fornals put it on a plate for the unmarked Säid Benrahma at the back post but the Algerian could only direct his header back across goal and over the bar.

On the hour mark, the Hammers somehow missed an even more golden chance when Vladimir Coufal almost pulled West Ham level. The Czech’s angled effort came back off the woodwork but landed firmly at the feet of Jarrod Bowen - all the forward had to do was poke it in the back of the net but incredibly he missed from just three yards out. How important could that miss be in the club’s battle for a Champions League spot at the end of the season? 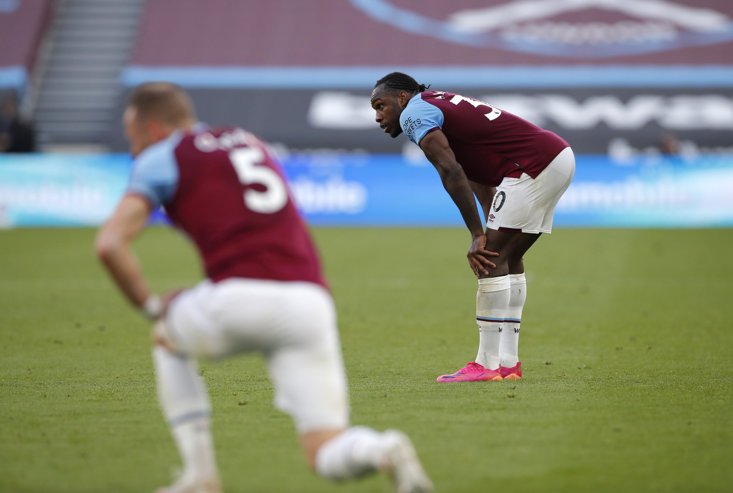 Despite all their possession and those gilt-edged chances, West Ham struggled to break down a resilient Everton side. Godfrey in particular was impressive, especially when it came to nullifying the threat of Aaron Cresswell. Another clean sheet for Jordan Pickford, who didn’t have a save to make, would have been decent viewing for England assistant manager Steve Holland, who was watching on from the stands.

Everton’s faint Champions League hopes remain alive with the win while West Ham, who seemingly ran out of ideas today, can not afford to drop many more points in their bid to catch up with Leicester.

Goal scorer Calvert-Lewin told Sky Sports after the match, "It was a tough shift, we had a few chances and mainly sat behind the ball. We dug in. It wasn't pretty but for the effort we put in we deserved it.

"It was about determination, hard work, sticking together, and that’s what got us the three points.

"I think every game is getting more important from now until the end of the season, so we simply have to keep believing and go into every game trying to win.

"This game is gone now. We have taken three points and we go onto the next one with the same intensity, the same attitude."