Football
News
Under Ancelotti, Everton are a force on the road once again
Elliott Bretland
22:43, 06 Feb 2021

“Only Fools and Horses is currently on GOLD,” wrote one Everton fan account on social media as the Toffees trailed 2-0 against Manchester United on Saturday night. Generations of Blues will have been appreciative of the heads up to switch channels as they’ve grown to learn that when their team go behind at Old Trafford, it’s usually game over. After all the Merseyside club have only won away at United once since 1996.

It’s been the same story for Everton against all of the so-called Big Six for decades. In the Premier League, their last win at Chelsea came in 1994, they haven’t won at Arsenal in nearly 25 years and they haven’t celebrated a victory at Anfield over fierce rivals Liverpool this century. However, things feel different under Carlo Ancelotti and while their 3-3 fightback against United will only give them one point, Evertonians will have seen something new, something they’ve actually witnessed all season - a fight and a belief completely lacking in past teams.

The Italian, who enjoyed immense success with Milan, won the Premier League title with Chelsea and also managed Real Madrid and PSG has given his side real spirit and turned Everton into a different animal on the road. His first trip with the Toffees ended in a 2-1 win at Newcastle and a superb late victory at Watford followed. 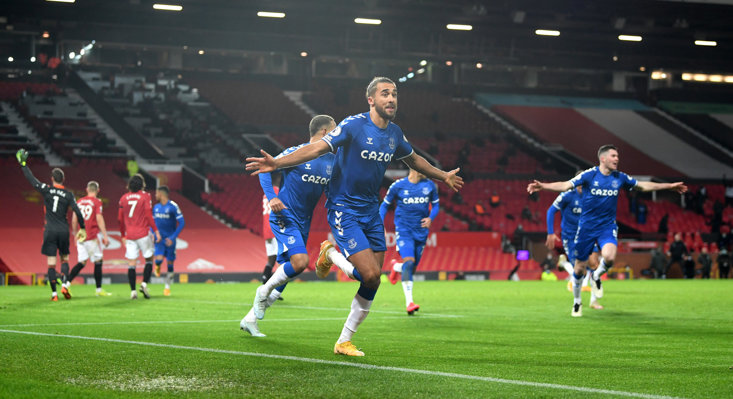 Across the 2017/18 campaign and 2018/19 season, Everton managed a combined total of just eight wins on the road. Already this season they have seven victories and there is no doubt fans will have celebrated Dominic Calvert-Lewin’s equaliser like it was a winner.

Past Everton sides have suffered from a soft underbelly, lacking in confidence and never truly having the faith they can go toe-to-toe with the teams at the top of the table. Too often when they crossed the white line, they acted like polite guests, happy to be courteous and gift their hosts with all three points. Now they rock up like young rascals gatecrashing the party of the cool, popular kid. With James Rodriguez acting as chief ringleader, they enter other team’s patches and now they compete.

That was the case on the opening day of the season. You can count Everton’s wins at Tottenham in the last thirty years on one hand but in mid-September they went to London and controlled their encounter with Spurs from minute one and thoroughly deserved to win.

Ancelotti has added much needed energy to his line-up and it shows. Everton now last the distance. Abdoulaye Doucoure patrols the entire pitch sniffing out danger and setting his side off on attacks while Ben Godfrey has become an instant fan favourite with his marauding runs from the back and gargantuan tackles embodying the spirit and desire Blues pride themselves on.

Everton fought back from two goals down at half-time. In the past, supporters would know that was game over. And again, when they allowed Scott McTominay to head home, Everton sides of yesteryear would have been crushed and folded. Not now though, with only sixty seconds remaining of four minutes added time, they rallied and rushed, knowing they could find an equaliser. Mason Holgate hurriedly took a throw and Andre Gomes wanted the ball instantly. Soon, it was up the other end of the pitch and Calvert-Lewin stuck the ball away to snatch a draw.

Everton’s midweek triumph over Leeds was only their fifth in 50 visits to Elland Road which just shows the change in mindset Carlo Ancelotti has brought about when the Blues go on the road. After pulling off a brilliant comeback against Manchester United, travelling Toffees are chomping at the bit for an away day for Ancelotti has made them winnable again.