Everton Football Club will play top flight football again next season after they staged an inconceivable comeback against Crystal Palace, coming from 2-0 down to win 3-2 for the first time in Premier League history. Dominic Calvert-Lewin powered home a late header to complete a phenomenal turnaround on an emotional night on Merseyside.

They were all over the show in the first half, yet Lampard’s half-time team-talk must have been Shakespearian as his players in the second half came out with aggression, determination and most importantly - belief.

Richarlison was a warrior, chasing and fighting for everything, while Calvert-Lewin acted as the vital focal point the Toffees have been missing this season. Whatever the former England man said at the break worked a treat as Everton came to life.

They needed a spark, and before the hour, the crowd was ignited. A free-kick was floated in and Mason Holgate headed the ball back to Michael Keane, who fired the ball home. All of a sudden, the Toffees came to life and the Goodison Park crowd, so desperate for something to cheer, were right behind their side.

The Toffees just believed in their comeback. They found their vital equaliser as Dele Alli teed up Richarlison, and his shot hit Conor Gallagher’s leg before going into the far corner. It was scrappy, but that’s exactly what Everton needed to be in this relegation scrap.

Then, with just five minutes to go, Calvert-Lewin completed an epic turnaround. Demarai Gray whipped in a free-kick and the Englishman powered his header past Jack Butland. Palace had capitulated in a firecracker atmosphere as the Everton fans spilled onto the pitch in joyous celebration.

The celebrations at full-time were even more emotional. Fans streamed onto the pitch with flares in their hands as the blue smoke drifted across the Goodison Park pitch. The change in emotion from the first half, where Jean Phillipe Mateta and Jordan Ayew had given Palace a two goal lead, was scarcely believable. 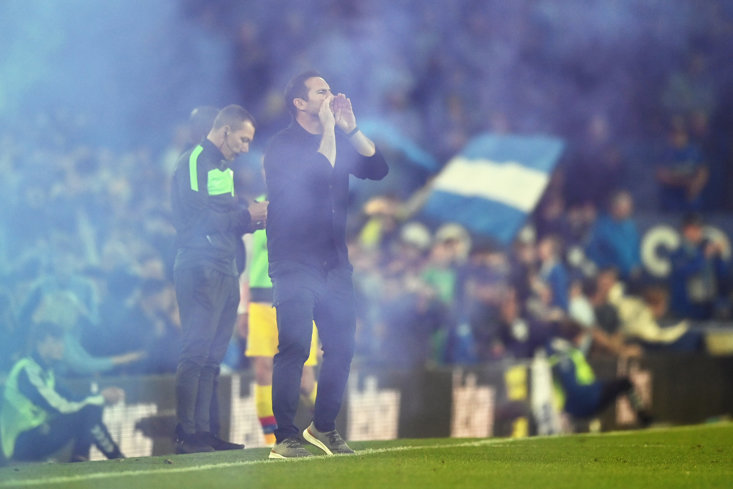 It felt as if in that first 45, that Everton had no luck. Ayew narrowly avoided a red card after a late challenge on Anthony Gordon and then two minutes later, he doubled Palace’s lead. Zaha hit a bouncing effort towards goal and it hit Ayew on the chin and bobbled past two players on the line. It was agonising, it was unlucky, it summed up Everton’s season.

The chaos that engulfed Goodison Park was not replicated in Birmingham however, as Burnley went in at the break one goal up. Ashley Barnes, cult hero of the spirited Clarets, could have been sent off after an elbow - but he converted a penalty late in the first half to give Mike Jackson’s side a vital lead.

As Everton came back into the game, Burnley lost their lead in the second half at Villa Park. Emi Buendia levelled the scores with a smart volley and all of a sudden this relegation battle had swung another way. Matthew Lowton was sent off in added time but Burnley escaped with a point, and now either them or Leeds United will be relegated on the final day.

But Everton are safe. A season of agony, of turmoil and of chaos comes to a blissful end as relief spreads over the blue half of the city. Lampard, doubted by so many, has done it.