Football
News
The Toffees move to two points away from safety and also have a game in hand over Burnley
Kieran Spratt
16:15, 01 May 2022

Everton claimed a crucial three points in their battle for Premier League survival after beating Chelsea in a hard-fought and feisty encounter at Goodison Park.

Frank Lampard’s side put in a superb performance that was brimming with character across the pitch to move to just two points from safety with a game in hand over 17th-placed Burnley. Chelsea meanwhile, although in pole-position for third, now find themselves being hunted down by Tottenham and Arsenal, with the former being 3-1 winners over Leicester today and the latter facing West Ham this evening.

The Toffees, as expected, started aggressively. An early cross from Alex Iwobi caught the arm of Cesar Azpilicueta but referee Kevin Friend waved away any penalty appeals. Despite their bright start, the home side were finding no reward for their effort and as Chelsea began to gain a foothold, it took the sting out of a fantastic atmosphere from the home contingent.

Mason Mount lofted a clever ball towards Kai Havertz in the centre of the box but the attack was snuffed out by Seamus Coleman. The clearance was headed away as far as Reece James, however the Everton captain defended excellently again to head away the follow up effort.

The affair began to heat up as the first half progressed. Mason Mount followed Antonio Rudiger into the referee’s book after a challenge on Yerry Mina. That tackle led to a case of handbags between the two sides and Azpilicueta and Coleman were swiftly shown yellows themselves.

Although Everton’s possession was limited, they still managed to carve out chances. Richarlison’s effort from a tight angle was sent wayward and then some last-ditch defending from Thiago Silva denied Abdoulaye Doucouré on the edge of the area. A feisty first 45 minutes where chances were few and far between was capped off with yet another yellow - this time for Fabian Delph.

A massive second-half for Lampard’s men got off to a perfect start as Richarlison broke the deadlock inside a minute. Azpilicueta gave away the ball after some intense pressure from the Brazilian who then picked his pockets on the edge of his own area. Demarai Gray was at hand to help prod the ball towards Richarlison who had the freedom of the box to coolly slot past Edouard Mendy and lift the roof off Goodison Park.

Sky Sports Premier League
@SkySportsPL
DEADLOCK BROKEN! 💥
Richarlison picks the pocket of Azpilicueta on the edge of his own area and cooly slots the ball past Mendy! 😎 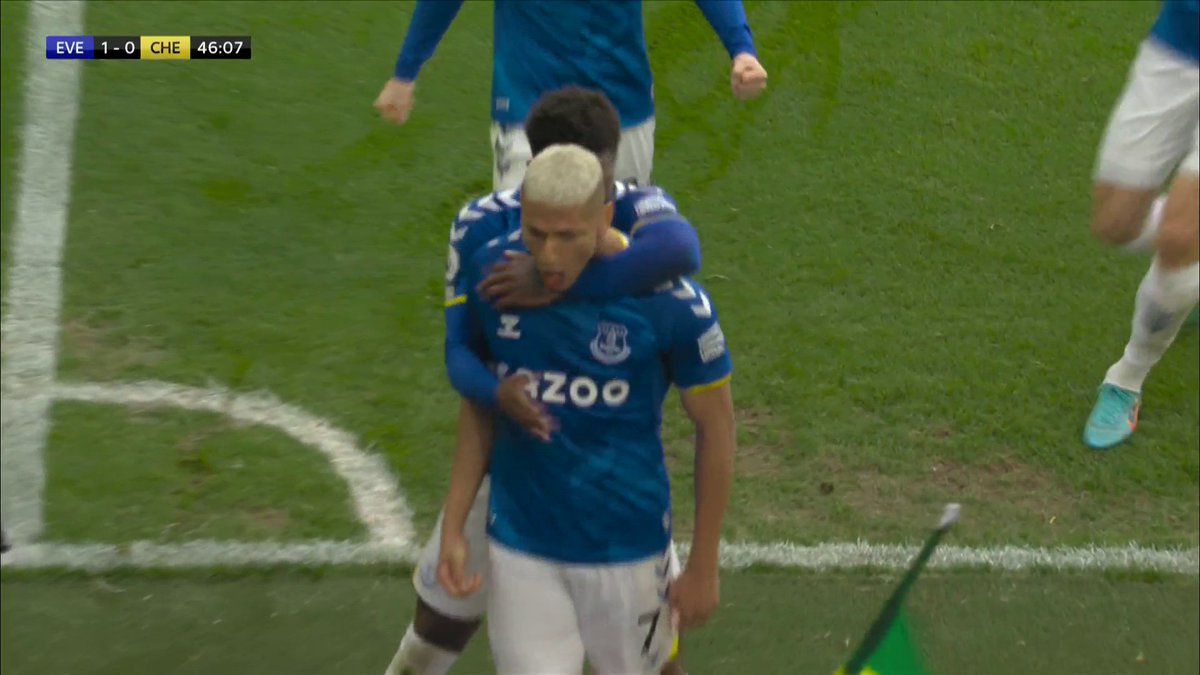 The hosts could have almost put the game to bed within five minutes, but Vitaliy Mykolenko, after being teed up by Doucoure in the box, wastefully sent his effort over the bar.

Two huge saves from Jordan Pickford kept the scores level. First the England stopper displayed some incredible reactions to deny Azpilicueta after Mount had hit the post and then, from the resulting corner, put his face in the way to deny Rudiger from close range.

Everton, who have now won each of their last four Premier League home matches against Chelsea, had a wonderful opportunity to double their lead in the 85th minute after Salomon Rondon found the feet of Gray in the box, but the latter’s effort was just over. Into a whopping seven minutes of extra-time, Man of the Match Pickford was the Toffee’s saviour once again, stopping a low effort from Mateo Kovacic at his near post to help his side see out a famous and vital win in Everton’s fight for survival.

Elsewhere in the Premier League’s Sunday 2pm kick-offs, Tottenham Hotspur moved back into the top four with a 3-0 win over Leicester.

Harry Kane has scored more goals against Leicester in all competitions than he has against any other club and the forward kept that fine form running by breaking the deadlock early on at White Hart Lane.

Against the run of play, a Son Heung-Min out-swinging corner from the right found Kane completely unmarked at the near post  and the England captain had little to do to nod home. Kane now has 19 goals in 17 appearances against the Foxes, with 17 coming in the Premier League.

Antonio Conte’s side doubled their lead in the second-half through Son. A hefty challenge from Cristian Romero dispossessed Caglar Soyuncu for the ball to run to Dejan Kulusevski. After dribbling into the middle of the box, the on-loan Swede set up Son for a neat left-footed finish into the bottom corner. The South Korean became only the second right-footed player to score 10+ goals in a single season with his left foot, after Kane in 2017/18 (10).

Kulusevski played the role of architect again to make it 3-0, feeding Son on the right of the box, who finished with sumptuous curling Goal of the Season contender into the top corner past a helpless Kasper Schmeichel. The Foxes pulled one back in stoppage time through Kelechi Iheanacho after the Spurs defence failed to close him down and the forward rifled home a consolation.

Spurs' time in the top four could be brief, with north London rivals Arsenal poised to overtake them again should they beat West Ham away this evening.