Esports
News
Konami have dropped the 'PES' name and have rebranded it as 'eFootball' which will be free-to-play when it launches this autumn
Conor Keane
13:02, 21 Jul 2021

The Pro Evolution Soccer era is coming to an end. Konami has dropped the name and announced that it will be rebranded as eFootball, which will be free-to-play when it launches this autumn.

The name of PES has been archived into history following this huge switch-up from the Japanese publishers. There were rumours circulating since they put the eFootball name in front of PES that they were clearly building up to this big change.

Using the Unreal Engine. eFootball will be released across consoles, PC, and mobile, with cross-platform matchmaking being made available after launch. Konami is not sharing too many details about the game for now, but they claim the animation system is being ‘overhauled’ with new technology which they call Motion Matching, resulting in four times as many animations.

The game won’t be entirely free however, as certain game modes will be sold as optional DLC. On the product’s roadmap there is something called the Match Pass system which is due in late autumn, where players will have to earn items and players. The roadmap also pledges a team building mode and online leagues due in the same period. 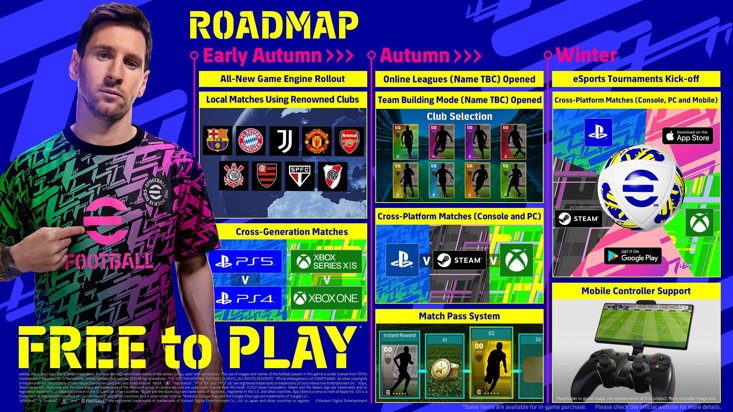 Similar to other Konami games, eFootball will not have as many official licenses as FIFA but FC Barcelona, Juventus, FC Bayern Munich and Manchester United will be available for free upon launch.

The game’s ambassadors will be Copa America champion Lionel Messi and Brazil’s Neymar Jr. The game will also feature Andres Iniesta and Gerard Pique as ‘official advisors,' though none of these players will be on the cover as eFootball will be a digital-only release.

Speaking to IGN, series producer Seitaro Kimura explained that eFootball is aiming to take a 'platform' approach with regular updates. There will no longer be annual paid releases of eFootball, but the platform will get free, yearly updates for new seasons.

It certainly feels like a new revolution is on the horizon for gaming and football.

x
Suggested Searches:
The Sportsman
Manchester United
Liverpool
Manchester City
Premier League
More
esports
Football Manager 2022: The Ultimate Management Sim Is Back
Dig out your favourite throwing water bottle and prepare to demand more, Football Manager 2022 is here. [ ... ]
esports
Forza Horizon 5: Perfecting The Formula In Mexico
It was 2012 when Microsoft and Playground Games released their attempt at an open-world racer, borrowing [ ... ]
esports
How To Spend Your First Day On Football Manager 2022
Call in sick, make a brew and unplug the phone (if you’re one of seven people in the world that [ ... ]
esports
Is eFootball Really The Worst Football Video Game Of All Time?
You’ve seen the memes, laughed at the glitches, and mourned its role in killing the iconic Pro [ ... ]
esports
Five Iconic FIFA Games: From The Dugout To The Streets
The wait is finally over, as FIFA 22 hits PC and consoles today. We have already test-driven the latest [ ... ]
esports
FIFA 22 First Impressions: How Does EA's Football Giant Measure...
The temperature has dropped, the nights are getting darker and the leaves are turning brown. You know [ ... ]
esports
Take Your New PlayStation 5 To The Next Level With These Essential...
It is finally here, but are you ready? After the now traditional seven year wait, the new generation [ ... ]
esports
Insane Gaming Chairs For The PS5 And Xbox Series X To Take You...
The fridge is stocked, the controllers are fully charged and that shiny widescreen TV is glowing. The [ ... ]
esports
From Custom Garages To Classic Tracks, Get Ready For Gran Turismo...
Finding the best racing game for you, is akin to finding the perfect beer. The one that hits the spot, [ ... ]
esports
From Arena Building To A Revamped Career Mode, The 5 Best New...
Autumn has arrived in the Northern Hemisphere, meaning that the ‘holiday’ season of gaming [ ... ]
esports
From Fatboy Slim To Franz Ferdinand, The Five Best FIFA Soundtracks...
FIFA 21 is out this week and that means a fresh new soundtrack. Sure, we love the football, the gameplay [ ... ]
esports
Norris Drives On At 'Not The Australian Grand Prix' To Help...
McLaren driver Lando Norris might not have yet reached a podium position or recorded a fastest lap in [ ... ]
esports
A $500K Prize Pot & The Chance To Show Pros How It’s Done -...
The final showdown of the Formula One Esports series takes place on Wednesday and the winner will [ ... ]