The headline bout is currently up in the air due to the fact Volkov is Russian and lives in the country. He has reportedly refused to travel to the UK early in order to ensure safe passage, so there remains a chance he will withdraw. The card is still expected to go ahead if Volkov does withdraw, with a replacement opponent believed to be likely for Aspinall.

The card is rich with top domestic fighters with popular Scouse pair Paddy ‘The Baddy’ Pimblett and ‘Meatball’ Molly McCann among the array of talent involved. It’s been a long time coming, but the return of the Octagon to British shores is bound to make for an incredible evening.

Here’s everything you need to know about this red hot night in the Big Smoke.

How to watch: BT Sport 1

Last Fight: Big Tom was not hanging around in his last trip to the Octagon. Aspinall took home Performance of the Night for his first round TKO of Sergey Spivak in September. Not one of Aspinall’s victims has heard the final bell yet, with the Englishman having nine knockouts and two submissions on his ledger. 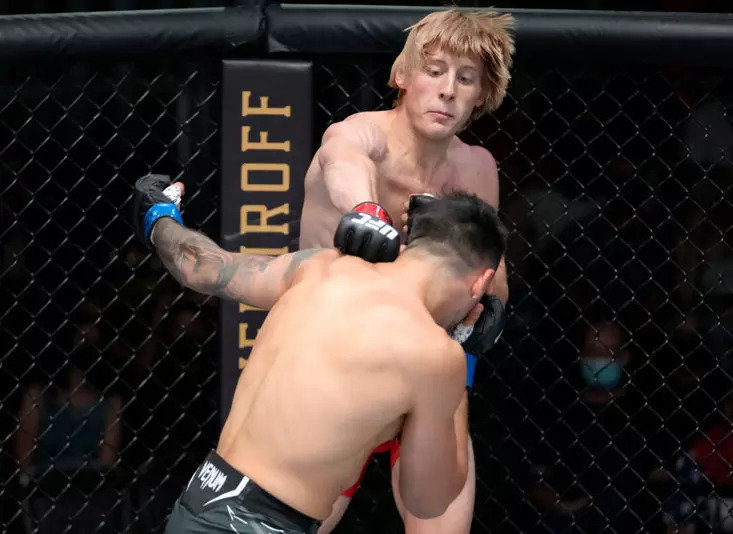 bad to the bone: 'paddy the baddy' will be on hand at the o2

“I'm aware of how good this guy is and how big an event this is. My goal is just that, I'm not thinking about anything else. He's 6ft 8, a rangy Russian, great kicks, great takedown defence, really underrated on the ground as well, done five rounds 70,000 times, I've never done it so he has all kinds of advantages on me.” [BT Sport]

Dana White On The Volkov Situation

“If that’s going to happen, let’s get these guys into England earlier. I know that we’ve been trying to get Volkov to leave Russia, and he hasn’t wanted to.” [TSN]