Ufc
News
Former champion is back in action on Saturday night against the Austrian challenger.
Steven Allen
06:55, 14 May 2022

The Europeans are taking centre stage on Saturday night as Poland’s Jan Blachowicz heads to the UFC Facility in Las Vegas to face off against his Austrian opponent, the number three ranked light heavyweight Aleksandar Rakic. ‘Polish Power’ returns to the ring for the first time since his shock defeat to kickboxing veteran Glover Teixeira, when the Brazilian defeated Blachowicz via rear naked choke to become the oldest ever first-time champion in the UFC.

Other than this main event, we get to see County Durham’s Davey Grant as he looks to return to winning ways, more light heavyweight action from Ryan Spann and Ion Cutelaba, and a great flyweight matchup between Katlyn Chookagian and Amanda Ribas.

How To Watch: BT Sport 1 coverage starts with the prelims at 1am, broadcast set to end at 6:30am.

Jan Blachowicz has had a long history within the world of MMA. He was a Polish, European and World champion in Muay Thai and Grappling, as well as having a successful career in KSW (Konfrontacja Sztuk Walki, or Martial Arts Confrontation translated), the premier MMA organisation within Poland. Despite his recent loss to Teixeira, he went on an impressive run of winning 9 out of his last 10 fights, beating the likes of Luke Rockhold, Dominick Reyes and Israel Adesanya on his way to winning and defending his belt.

His stifling grappling is enough to snuff out the most aggressive fighters, and he has a huge engine that sees him reach the end of many five-rounders. On the feet he’s had eight knockout victories, famously knocking out Corey Anderson with a left hand that was made out of lead.

In the opposite corner is Aleksandar Rakic, a Viennese brawler who’s only loss in the UFC so far has come against title challenger Volkan Oezdemir. 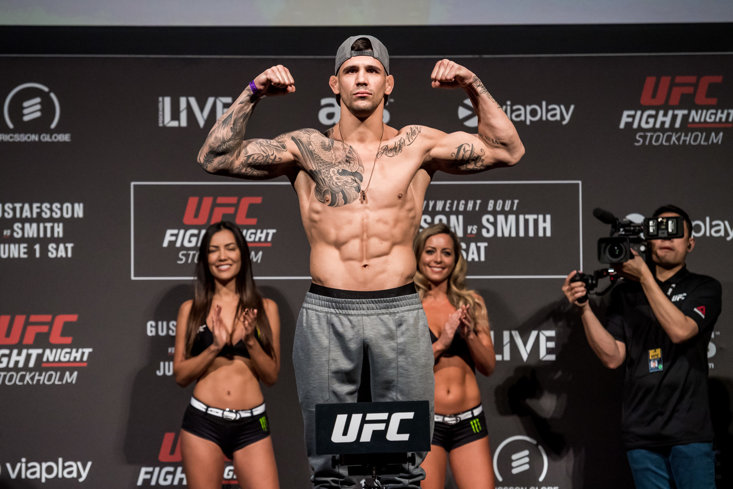 He has wins over Thiago Santos and Anthony Smith and is currently on the third fight of his six-fight contract that he signed with the UFC following his controversial loss to Oezdemir. It was a fight that was scored in the favour of Rakic by eight of the nine media representatives, which reflected the damage, strikes and takedown advantage that Rakic had on the night, but wasn’t reflected in the split decision loss.

Nevertheless, his two unanimous decision victories since have got him another shot to become the top contender. A win on Saturday night almost guarantees the Austrian a shot at either Glover Teixeira or Jiri Prochazka depending on the outcome of that fight next month in Singapore.

Expect this fight to make it a few rounds, with plenty of action on the ground rather than on the feet.

Light heavyweights Ryan Spann and Ion Cutelaba meet in the cage with the pair looking to cement a number next to their names on the rankings and try and find a more established opponent next time out. Nick Maximov of the Nick Diaz Academy and Dana White’s Contender Series fame is looking to continue his unbeaten run against Andre Petroski, a tough grappler who learned under Daniel Gracie before reaching The Ultimate Fighter semi-final.

Katlyn Chookagian is chasing a fourth win in a row, this time against Amanda Ribas who returns to flyweight after a win and a loss at strawweight, the class she was a champion in when she was fighting in Brazil. The pair are staples at the top of their respective female weight classes and can look to find themselves a shot at the title.

Finally, Englishman Davey Grant will face fellow UFC veteran Louis Smolka in what could be a fight of the night contender. The pair are unpredictably inconsistent on their day and often fight with the heart rather than the mind, so we’re likely to see this one go off.