Ufc
News
Rob Font is back after his five-round loss to Jose Aldo against the Pride of Ecuadorian MMA
Steven Allen
06:55, 29 Apr 2022

The spiritual home of mixed martial arts, Las Vegas, hosts the bantamweight main event between Rob Font and Marlon Vera with the duo looking to cash the cheque that gets them into the title picture.

Font, the New Jersey native, lost in his last visit to the Octagon to former champion Jose Aldo, who used his experience to dismantle Font in a five-round battle of endurance.

Vera on the other hand is currently on a two fight win streak since he also lost to Jose Aldo, defeating Davey Grant in a fight of the night unanimous decision win and a third-round stoppage of Frankie Edgar at Madison Square Garden.

Rob Font has had a mixed bag of results in the UFC. An excellent all-rounder with proficient boxing and wrestling techniques, he boasts eight knockouts and four submissions in his win column. Despite some big wins against Cody Garbrandt, Marlon Moraes and Ricky Simon, losses against the likes of Aldo, Raphael Assuncao and Pedro Munhoz has proven to be an obstacle for him in his search for a UFC title.

Marlon Vera is a veteran of the fight game himself. He made his debut back at UFC 180 in November 2014, aged just 21, where his bantamweight journey began. 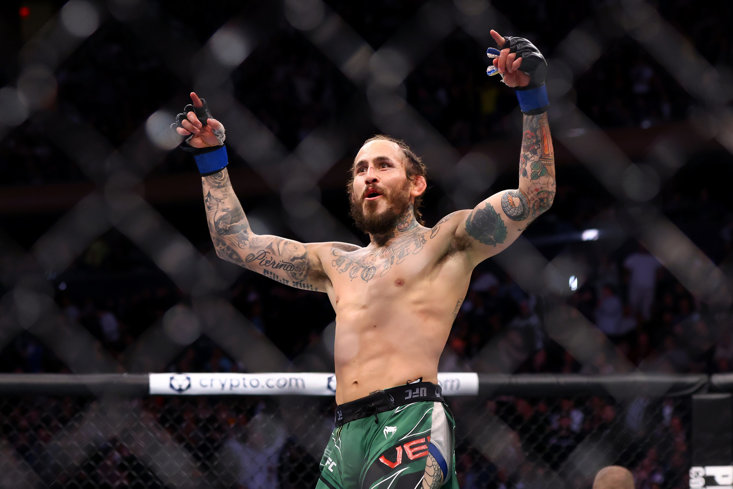 He currently holds the record for most stoppage wins in the history of the division with nine, and also has the impressive record of never being stopped. He carries a tremendous amount of heart and passion towards fighting and is normally great value in any fight. He remains the only man to defeat fan favourite Sean O’Malley and his win in front of the mega crowd in New York last November was enough to solidify his place in UFC history as a loyal bantamweight contender.

When these two meet, the hierarchy of the bantamweight division is set to be assaulted. Harder opponents than each other will definitely lie ahead for either man, whether in the form of the deadly Petr Yan, a rematch with Jose Aldo or even a pop at the champ, Alljamain Sterling. Don’t expect this one to be over quickly, as both fighters are known for their stamina and getting a result in the end. A decision probably doesn’t favour the Ecuadorian, who averages more significant strikes received than landed, so Vera will want to get out there and end it before the fifth.

UFC Europe
@UFCEurope
Front kick to the FACE! 😱
🇪🇨 @ChitoVeraUFC bringing the record for most BW finishes with him to #UFCVegas53!
10
115

The penultimate fight on the card is a heavyweight match-up between Andrei Arlovski vs Jake Collier. Arlovski continues to impress, only losing to British juggernaut Tom Aspinall in his last six fights, despite being 43 years old. He seems to only improve in every fight he has and continues to be an effective gatekeeper for the deadliest division in combat sports. Collier managed to secure a first-round submission over Chase Sherman after a few years of trying to find which weight class worked best for him. He has a long road ahead if he wants to return to contender status, but a win against a veteran like Arlovski could do him the world of good.

Andre Fili and Joanderson Brito return to the ring since they were both on the end of unfortunate eye poke incidents, with Brito still waiting for his first UFC victory since being awarded his contract on Dana White’s Contender Series. Jared Gordon continues his exploits in the lightweight division, facing Grant Dawson, who is undefeated so far in his time in the organisation. Veterans Darren Elkins and Tristan Connelly both hunt for wins after losing last time out and Poland’s Krzysztof Jotko will face Gerald Meerschaert in a battle to stay around the top 15.