We’re going to be treated to a south London derby in the capital this weekend when Joshua Buatsi and Craig Richards collide at the O2 Arena.

The undefeated Buatsi will be looking to put on a show against former world title challenger Richards, who proved he belonged among the light-heavyweight's best last May, putting in a valiant effort in defeat against recent Canelo conqueror Dmitry Bivol.

When: Saturday 21st May

How To Watch: DAZN. The card is set to begin at 7pm (UK time), with the ring walks for the main event expected at approximately 10.30pm depending on the length of the undercard.

Last Fight: Buatsi inflicted an 11th-round knockout over Ricards Bolotniks to stay on course for a world light-heavyweight title fight last August at the Matchroom HQ in Brentwood.

“The crowd are going to be in for a treat. I am coming to win and nothing else, I am sure Richards is doing the same.

“He had a close fight with [Dmitry] Bivol so will want to make things straight, but I have other plans. Win well and then push onto the world title by any means necessary.”

“We’re two top tier fighters from the UK. This is one of the biggest domestic clashes for a long time.

“Nobody is going to stop me from fulfilling my destiny of becoming a world champion.

“He is a solid competitor and will be coming to win, but I am confident and believe I have the tools to get the job done.” 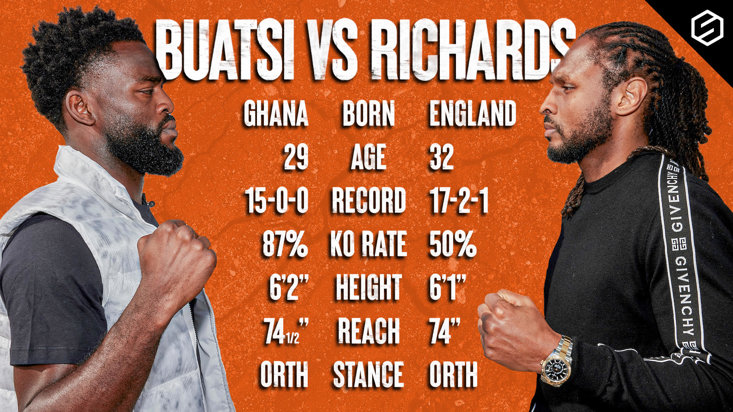