That’s not the only noteworthy fight of the night though. Caroline Dubois, sister of heavyweight contender Daniel, kicks off her promising lightweight career as she makes her professional debut, while Hosesa Burton and Dan Azeez duke it out for the vacant BBBofC British light-heavyweight title. Popular Albanian welterweight Florian Marku will also be in action. Here’s everything you need to know... 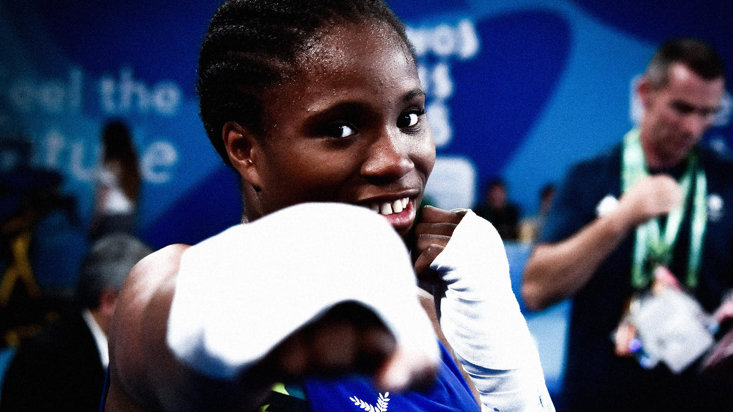 When: Saturday 20th November. The action will be live from 9pm.

Having missed the entirety of 2020, it’s been a busy few weeks for Riakporhe in the lead up to this one, having only last fought at the beginning of October. The Midnight Train ended his lengthy absence by beating Poland’s Krzysztof Twardowski on points at Wembley. Durosoal meanwhile has fought twice this year, stopping Jaryel Tafarov and Shaban Hamdi Jongo in March and May, respectively.

"If the firefight comes I have the punching power to do it. Every opponent I have fought during my career I have hurt and you know what to expect with me.

"Now it is my time to shine, it is the perfect time for me having had a fight earlier this month and my previous opponent was durable especially as I put him down and he got up and came back for me.

"So I think this next one is a great fight for me." [The Mirror]

x
Suggested Searches:
Manchester United
Liverpool
Manchester City
Marcus Rashford
Premier League
More
boxing
Roy Jones Jr Leads An Incredible 2022 Boxing Hall of Fame Class
The International Boxing Hall of Fame has announced their 2022 inductees, and it is an incredible field. [ ... ]
boxing
Jake Paul's Twisted Boxing Circus Rolls On Without Tommy Fury
The circus hasn’t left town, but we do have a change of clowns. Actual genuine professional boxer [ ... ]
boxing
Whether Anthony Joshua Steps Aside Or Not, His Detractors Will...
This week marks the second anniversary of Anthony Joshua’s rematch victory over Andy Ruiz Jr. [ ... ]
boxing
Everything You Need To Know About Vasiliy Lomachenko Vs Richard...
‘The Matrix’ is back. Forget the long-awaited Keanu Reeves sequel, the physics-defying phenomenon [ ... ]
boxing
Thrilling End To Year For The Lightweights Can Springboard Division...
About this time last year, in this same publication, I wrote that 2021 would be a landmark year for [ ... ]
boxing
Mersey Beat: Lyndon Arthur And Anthony Yarde Have Everything...
British light heavyweight standouts Lyndon Arthur and Anthony Yarde will renew hostilities 364 days [ ... ]
boxing
Usyk Willing To Fight Fury If AJ Steps Aside, Five Boxing Stories...
Oleksandr Usyk has said he would be willing to fight Tyson Fury if Anthony Joshua steps aside, Kell [ ... ]
boxing
Introducing The Sportsman Boxing Power Rankings
The Sportsman Boxing Power Rankings is a new monthly series ranking boxers on a number of factors to [ ... ]
boxing
People Are Right To Complain About Brook vs Khan’s PPV Billing,...
Being a boxing fan these days can sometimes feel akin to Indiana Jones’ run in with the Ark of [ ... ]
boxing
Everything You Need To Know About Devin Haney vs Joseph Diaz...
Well the fights start coming and they don’t stop coming. Now it’s lightweight all-star Devin [ ... ]
boxing
The Emperor's New Groove: What Next For George Kambosos Jr?
To the victor go the spoils, and for George Kambosos Jr, his choice of spoils is quite incredible. The [ ... ]
boxing
Everything You Need To Know Ahead Of Lyndon Arthur Vs Anthony...
Almost a year to the day since their first meeting, light-heavyweights Lyndon Arthur and Anthony Yarde [ ... ]
boxing
On This Day In 1985: Rocky IV, Balboa's Greatest Adventure,...
Can you believe it’s been 36 years since Sylvester Stallone’s magnum opus, Rocky [ ... ]
boxing
Tyson-Lewis, Floyd-Pacquiao And The Fights That Came Too Late
Reports suggest that British boxing stars Amir Khan and Kell Brook are once again targeting a fight [ ... ]
boxing
Teofimo Lopez vs George Kambosos Jr Could Join The Great Lightweight...
Teofimo Lopez and George Kambosos Jr finally step into the ring on Saturday in a blockbuster lightweight [ ... ]
boxing
Joe Joyce In Talks To Face Pulev: Five Boxing Stories You Might...
Joe Joyce is set for a heavyweight showdown with a division veteran, Amir Khan versus Kell Brook is, [ ... ]
boxing
Rocky Fielding, Ohara Davies And Badou Jack Take To The Ring...
Super lightweight standout Ohara Davies returns to the ring on Friday in Dubai. He was originally scheduled [ ... ]
boxing
On This Day: Roberto Duran And The Unthinkable 'No Mas' Against...
Roberto Duran had hands of stone. He had won 71 of 72 fights in a blistering career. He had reigned [ ... ]
boxing
Joe Joyce Wants To Face Tyson Fury, But Dillian Whyte Won’t...
Joe Joyce has thrown his hat into the ring for a possible world heavyweight title clash with Tyson Fury. [ ... ]
boxing
The Top 10 British Heavyweights Of The Modern Era
British boxers have taken over the heavyweight division in recent years. WBC and lineal champion Tyson [ ... ]
boxing
After The Porter Slaughter, Terence Crawford MUST Fight Errol...
People told Terence Crawford that his record needed a world class welterweight in their prime, so he [ ... ]
boxing
Everything You Need To Know About Teofimo Lopez vs George Kambosos...
It has been a long, bizarre road but Teofimo Lopez will finally step in the ring with George Kambosos [ ... ]
boxing
Mike Tyson’s Destruction Of Trevor Berbick Is Still Stunning...
On this day 35 years ago, Mike Tyson became the youngest world heavyweight champion in history. He was [ ... ]
boxing
Everything You Need To Know About Demetrius Andrade Vs Jason...
Demetrius Andrade, perhaps the most avoided man in boxing, returns to the ring tonight. ‘Boo Boo’ [ ... ]
boxing
Terence Crawford vs Shawn Porter Is A Match Made In Heaven
Modern boxing is often criticised for providing fights that aren’t competitive on paper, mismatching [ ... ]
boxing
Is Canelo Cruising For A Bruising? Saul Alvarez Targets WBC...
In the wake of Saul ‘Canelo’ Alvarez beating Caleb Plant to become undisputed super middleweight [ ... ]
boxing
‘If You Can’t Kill Me, Then Forget It’: Richard Commey Is Ready...
Former IBF lightweight champion Richard Commey is in a confident mood as he prepares to face pound-for-pound [ ... ]
boxing
Triller Announces Triad Combat: Triangular Rings, Hybrid Rules...
Triller have announced Triad Combat, a “revolutionary, combat team sport” that incorporates [ ... ]
boxing
Everything You Need To Know Ahead Of Terence Crawford Vs Shawn...
This weekend sees one of boxing’s pound-for-pound best fighters make his long-awaited return to [ ... ]
boxing
Remembering The Fight When Muhammad Ali Proved He Was Undeniably...
“The greatest Ali ever was as a fighter, was against Williams - that night, he was the most devastating [ ... ]