Boxing
News
Nobody is pretending Floyd is still world class, but he is providing some of the best entertainment of his career
Joey Mills
20:30, 23 May 2022

Floyd Mayweather was having fun. On Saturday night in an Abu Dhabi ring, the boxer who defined a generation was letting his hair down. That hair is a little longer these days, the closely-cropped head of his peak giving way to a full head of jet-black follicles. But the skills remain sharp, far sharper than is customary for a man of 45. Like it or not, ‘Pretty Boy Floyd’ is on his victory lap. And the 50-0 superstar is loving every second.

Mayweather has attracted criticism for his exhibition this past weekend. Very little of that blowback has been due to the questionable human rights record of the United Arab Emirates. Rather, people have been quick to question the need for Floyd’s exhibition. The class of his opponent, unbeaten former sparring partner Don Moore. But in this era of exhibition boxing, surely the quality of opponents is a moot point? Moore certainly has finer boxing credentials than anyone Jake Paul has faced, and those were classed professional bouts. Mayweather’s move-around with Moore was an unscored exhibition, and marketed as such.

It bears repeating that Mayweather also created this booming market. It was ‘Money’ Mayweather’s 2017 pro boxing bout with UFC megastar Conor McGregor that clued the industry in on the fact money could be made by pitting boxers against non-boxers. Floyd has proved it time and again since, taking home upwards of nine-figures for exhibition bouts with kickboxer Tenshin Nasukawa, YouTuber Logan Paul and now ex-pro Moore.

So after 50 professional bouts, 49 of them against professional boxers, and world titles at five weights, why can’t Floyd enjoy this victory lap? There are no questions about his legitimacy as a boxer, like there are about the Paul brothers or the dozens of MMA fighters trying their hand at a new sport in their old age. He is also not shop-worn, like Evander Holyfield, who was brutally knocked out in an exhibition bout with Vitor Belfort last year. Mayweather’s defensive acumen means he took precious few clean punches in his career. The Moore exhibition proved that those skills are dulling at a much slower rate than they do for the average fighter. 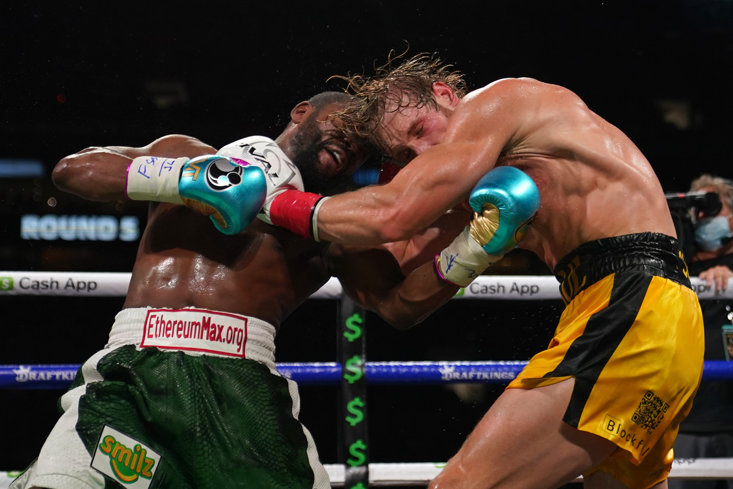 It is ultimately those skills that justify what Floyd is doing. Fans will happily pay, in the arena and on pay-per-view, to see the shoulder rolls and rapid short punches that ruled boxing. Mayweather was often bemoaned as a runner, but his real genius came in his ability to stand in front of an opponent and make them miss, before scoring with his own shots. Against a certain standard of opposition, ‘Money’ can still make those moves. Exhibitions are entertainment, and Floyd’s are fun to watch. In Abu Dhabi, he danced with ring card girls, chatted with commentators mid-fight and still showed enough application to knock his foe down. Cynics might suggest a Floyd exhibition is more bang for your buck than a few of his pro fights were.

Expectations must obviously be tempered. Some were shouting for Mayweather to rematch Saul ‘Canelo’ Alvarez in the wake of his fine showing against Moore, and the Mexican’s relative poor outing in defeat to Dmitry Bivol. Make no mistake, Mayweather is not what he was. He should not take to the pro ring again. Neither should his old rival Manny Pacquiao, who some are suggesting will return having lost the Presidential election in the Philippines. Even a bout with each other is not justification enough for a full professional return. Both men gave us more than enough already. But Mayweather can continue on the exhibition circuit for a little longer. These lucrative bouts won’t enhance his legacy, but even at 45 there is still a giddy thrill in watching one of the greats do his thing.