“Football is a game you play with your brain” – Johan Cruyff

Paul Scholes, Andrea Pirlo, Xabi Alonso and many equally lavishly blessed individuals have been attributed with having that unmeasurable, the unquantifiable, indeterminable quality of footballing intelligence; that extra something on the pitch that separates them from their teammates and peers. What is football intelligence? What does it mean for a player and a manager? Can we measure it? Can we define footballing intelligence in a way that makes it more relatable to the average viewer? Whilst the physical attributes and motor coordination required for elite level football (and sport in general) are not up for debate, there has been more attention given to the psychological (mental strength) and game intelligence aspects of the sport in recent years.

Intelligence in its most general form is a vague and difficult concept to intellectualise and applying it to a sport that doesn’t have clear metrics to measure these aspects is even more difficult. Essentially, intelligence is the ability to pick things up and then apply them whether it is knowledge or a new skill. In general life, away from elite football, there are various indicators of this; including educational level, IQ tests, job function, professional achievements etc. but even then, they are not definitive and are not always a true reflection of intelligence. It is probably more accurate to state that they are a reflection of the ability of the individual to succeed in a specific system. Wanting to avoid long existential debates around intelligence, let’s just say we can measure it, in general, with an IQ test; a similar test does not exist for footballers, making the debate difficult to definitively resolve.

When we think about intelligence, one way we can look at it is through the executive functions (or cognitive control) of the individual. Executive function is an umbrella term for the neurologically-based skills involving mental control and self-regulation which allow us to manage ourselves and our resources in order to achieve a goal. These functions range from planning and attention to decision making and problem-solving skills. It’s easy to see how these can be attributed to footballers on the pitch. For example, decision making is a key aspect of a player’s ability to effectively contribute in a game environment. Nobody would deny that Cristiano Ronaldo is an effective footballer (to put it mildly) with supreme in-game intelligence but early on in his career his decision-making was in question. That extra step-over was held up as a sign that he didn’t have the judgement to elevate himself to the next level; the sign of a player more concerned with the aesthetics of the game than the end-product. Things have clearly changed dramatically since his early days at Manchester United as he has amassed an unbelievable goal and assists record; his effectiveness on the pitch is no longer under scrutiny. But does that mean he has become a more intelligent player or does it mean he has applied the intelligence he always had to make more informed decisions to better affect the game? 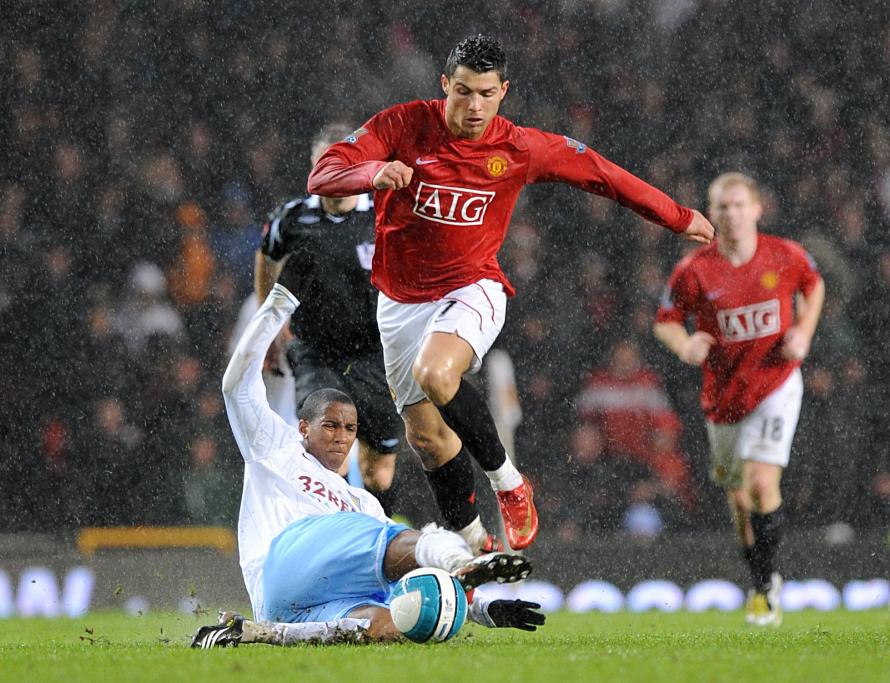 Cristiano Ronaldo: A player who has adapted his game massively

In a different study, researchers found that a group of highly talented youth footballers had better scores in certain aspects of higher executive function compared to a group of amateur youth footballers. In contrast, they also found that the more talented group had a lower mean IQ suggesting that intelligence on the pitch isn’t necessarily related to general intelligence, but can be coached.

This theory that cognitive function in athletes can be improved through coaching has been postulated in a paper by the neurophysicist Dr. Jocelyn Faubert. He explored the differences between elite level athletes and those that are “sub-elite” in the areas of perceptual-cognitive abilities. These are the abilities that we would probably associate with intelligent footballers: positional awareness, tactical proficiency, anticipation or reading of the game, making fast and efficient decisions and recognising patterns. Within his research he states that what sets apart elite level athletes might be “the ability to process relevant perceptual cues and enhance search strategies”; in other words, read the game and make faster, better informed decisions. The obvious question to ask then is whether these abilities can be improved upon through systematic coaching?

The classic coaching paradigm calls for repetitive training of motor functions – i.e. “practice makes perfect”. Imagine a goalkeeper who is anxious about coming out for corners or crosses. In order to improve his game, he practises catching under pressure repeatedly in the hope of reducing errors through repetitive actions. However, if you could improve his perceptual and cognitive skills the anxiety associated with the high balls into the box could be overcome and the likelihood of errors reduces. Combine this with the repetitive practice he is already doing and the goalkeeper is suddenly a vastly improved player. Dr Faubert’s paper suggests that these higher functions can be coached and, importantly, there is a high ceiling for improvement. For example, there are methods that can be used to improve multiple object tracking (MOT) which allows the goalkeeper to track the ball, his teammates and the opposition at the same time. The more proficient he becomes at this, the better his awareness and decision making, and ultimately the better his play.

This is just one example of an area that can be substantially improved with some focused training. In addition to MOT, there are other areas that can be improved, including expanding the visual field and improving three-dimensional visuospatial awareness; all of which would dramatically improve any footballer’s game. Incredibly, tests of some of these tools have shown improvements of 50% just in a few surprisingly short sessions. If coaching teams and sports scientists were able to develop training programmes tailored for specific sports, or even specific positions, the gains could vastly improve the in-game intelligence of players.

Despite all of this, it is quite clear that certain players have these abilities naturally. Scientists may talk about perceptual-cognitive abilities or executive function but within football we talk about tactical awareness, reading of the game, vision, anticipation and sometimes even describe players as having a telepathic understanding with one another. Whichever way you want to describe it, these players tend to perform at a higher level and stand out in the game without necessarily having more physical talent. Two such players, Xavi and Andres Iniesta, were measured in a similar fashion to the study at the Karlinska institute and both scored in the top 0.1% in various tests of executive function. They are not the biggest, the fastest or the strongest players on the pitch and never will be, but their game intelligence combined with their physical ability to manipulate the ball means they are two of the game’s greatest ever players. To the average viewer, these abilities are unquantifiable and perhaps unintelligible at times but the research suggests that they are far from untouchable.

With modern sports science teams working alongside coaching staff, the technical ability, physical fitness, tactical knowledge and mental strength of players is constantly under care and being developed. However, the development of coaching game intelligence, that ability that allows a player to recognise and adapt to fast moving, high pressure situations on the pitch, is still a concept in its infancy. If teams could improve the footballing intelligence of their players in the same way they can optimise physical and mental preparation, it could be game-changing for the way in which the sport is coached. Given that the margins are so fine in modern football, any advantage that can be gained is likely to reap huge dividends on an individual and team level. Combining the physical attributes, which are so obviously needed in modern football, with the indeterminable intellectual aspects of game management, allows players to excel above and beyond similarly gifted peers.

“Football is a simple game made complicated by people who should know better.” – Bill Shankly

Despite all the complex language and theory, the research has shown that, with the correct planning and structure, it is not necessarily difficult to coach game intelligence and anecdotally there are many examples of this. The German Football Association famously revamped their development programme after an utterly dismal showing at the 2000 European Championships. Of note, a key factor in their overhaul was introducing more tactical coaching and in-game flexibility to develop more intelligent players. This was, of course, on top of the technical and physical coaching that is an established part of the modern coach. As a result, the last decade has seen German players come through and excel in club and international competition. Perhaps the prime example is Philipp Lahm who was described by Pep Guardiola as “the most intelligent player” he has ever worked with. Another thing to note, and perhaps the most important, is that the concepts of game intelligence do not have to be relayed in a complicated manner (despite the complex research underpinning the theory). An excerpt from Iniesta’s autobiography describes a coaching session at Barcelona when Johan Cruyff and his assistant Tony Bruins arrived on the scene. Using a whiteboard, Bruins started to draw passing and tactical drills and said, “This is positional play and the essence is in the first-time pass.” After a pause, a Spanish player asked, “Is that it?” and Bruins replied “Yes, it’s everything. Football is simple. You divide the pitch up into triangles and the key is to always have the ball and to create superiority”. The coaching duo overhauled the first team squad and the famous La Masia youth academy, moulding young players and developing their game intelligence in addition to the more traditional physical skills. They knew that the greatest players make football look easy through sheer talent but when you can coach game-intelligence, football becomes a simple game for everyone.