Sports
News
There are a host of fantastic sporting events taking place over the next three days
Simon Lillicrap
16:30, 14 May 2021

With indoor meetings of up to six people permitted from Monday, pubs being allowed to partially open their doors to bring us in from the cold and other social venues such as cinemas reopening, sport may begin to take a back seat in most people’s lives. One of the positives over the past year of struggle has been the ability to settle in and watch sport from your sofa.

With nowhere to go and nobody to see, we have enjoyed more sporting events than ever before from our lounges, even if it isn’t quite the same as being there in person. Fittingly, on the final weekend where you won’t have any plans, the sporting calendar looks like a cracker. Settle into that bum-shaped indent that has formed in your sofa, here is what you have got to enjoy this weekend.

The showpiece event for the most historic cup competition in the world. Thomas Tuchel’s resurgent Chelsea side take on Leicester City, who are on the hunt for their first ever FA Cup trophy. The Foxes have appeared in four previous finals without success so far, while the Blues also have the small matter of a Champions League final to come later this month.

That double would mark a remarkable start to life at Stamford Bridge for the new Chelsea boss, but Brendan Rodgers has made tremendous progress in his time at the King Power, and an FA Cup trophy would be a fitting reward for him and his talented side. You don’t want to miss this one.

Emma Hayes’ Chelsea side are on course to win every single trophy available to them this season. Only the FA Cup (with the final rounds delayed until next season) and the Champions League final remain. With Fran Kirby, Sam Kerr and Pernille Harder scoring the goals as part of a thrilling forward line, and Ann-Katrin Berger proving herself to be one of the best goalkeepers in the world, they have a real chance of winning their first Champions League trophy this weekend.Barcelona are their opponents having beaten Paris Saint-Germain in a tight semi-final with Dutchwoman Lieke Martens the one to watch. She got two goals in that semi and will be looking to break through a resolute Chelsea backline. Should be a cracker. 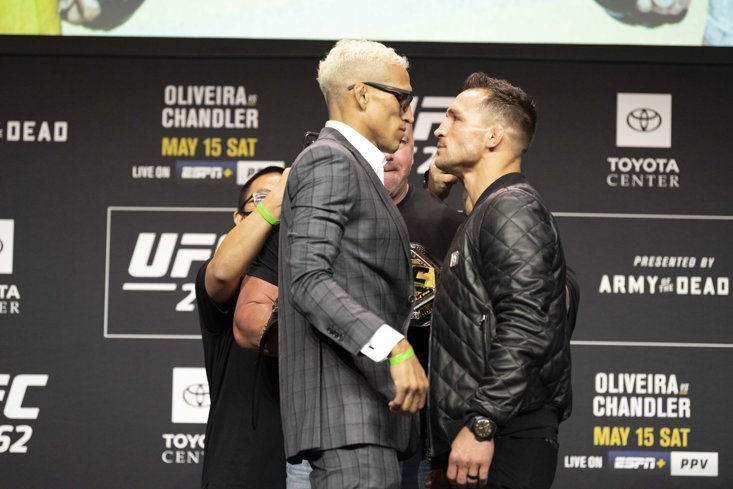 This is a lightweight clash to savour this weekend. If you are into your UFC, it should be well worth staying up into the wee hours of Sunday morning to watch Charles Oliveira battle with Michael Chandler.

Oliveira has won his last eight contests, including a tight decision win over Tony Ferguson (who is also on the card) at UFC 256, while Chandler is fresh off the back of his UFC debut win over Dan Hooker at the start for the year.

When: All day Saturday!

We are already two days into the Betfred British Masters but it is at the weekend where things really hot up. Edoardo Molinari, Englishman Danny Willett and Robert MacIntyre are all currently vying for the lead and should be in contention right until the final day.

A whole Saturday spent watching the top golfers in the world battling it out for a purse of over £1.5m, what could be better than that? 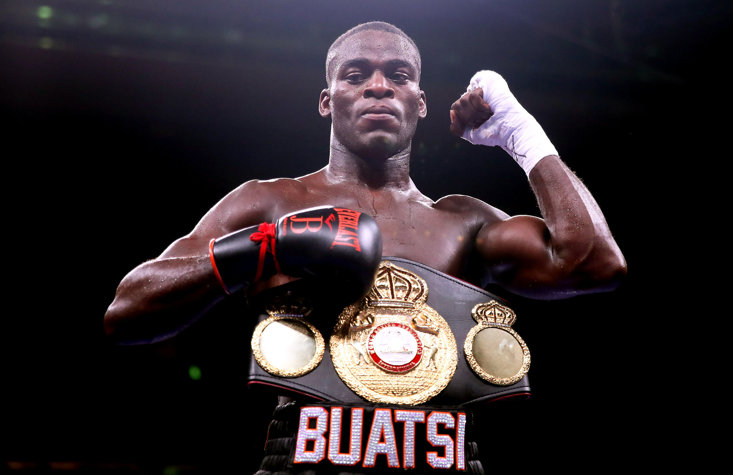 One of Britain’s rising stars in boxing, Joshua Buatsi, is taking on Frenchman Daniel Dos Santos in what should be a cracking light-heavyweight contest. Dos Santos has had a well-documented troubled past, having been in the army and in prison before finding boxing, while Buatsi is looking to keep his 13-0 perfect record intact.

With 11 of those wins coming by way of knockout, this one should produce fireworks. If you are into your combat sports, this could act as the perfect starter before the main course of UFC 262 in the early hours.

Okay, we know this one technically isn’t the ‘weekend’ but stick with us. The return of fans to the Betfred Super League this Monday is a seismic moment in the world of sport. For over a year we have been unable to watch any top-level rugby league in person, and Warrington Wolves v Huddersfield Giants will give us the chance to do so once again.

It should be a cracker too, Huddersfield have lost four of their opening five but shown fleeting glimpses under new coach Ian Watson, while Warrington have looked excellent in recent weeks, winning their last three on the bounce with new boy Greg Inglis making his mark.

x
Suggested Searches:
Manchester United
Liverpool
Manchester City
Marcus Rashford
Premier League
More
sports
Tom Stoltman Becomes First Scot To Claim World’s Strongest Man...
Invergordon strongman Tom Stoltman became the first Scotsman to hold the title of World’s Strongest [ ... ]
sports
England’s Croquet Five Lions Conquer Scotland To Bring It Home...
It was all a world away from the frenzied hype of Euro 2020 gripping the nation. But on five beautifully [ ... ]
sports
The Hulk To ‘The Mountain’, Five Monster Moments From The World’s...
Since its debut in 1977, The World’s Strongest Man has become a beloved spectacle to hundreds [ ... ]
sports
From Indy 500 To Giro d’Italia, Here Are Five Sport Stories...
It’s been a busy weekend in the sporting world and whilst most of the talk might have been around [ ... ]
sports
Mickelson, Serena And The Sporting Legends Who Turned Back Time...
Sport has always been a young person’s game. For years we have been blown away by the talents [ ... ]
sports
Five Things You Probably Didn't Know About The Tony Hawk's Pro...
For a number of millennials, few athletes encapsulate their childhood as the skateboarder [ ... ]
sports
The Year Of The Fox: How The Sporting City Of Leicester Emerged...
In 2012, the greatest thing to happen to the city of Leicester was that the remains of King Richard [ ... ]
sports
No Passion, No Point: Eddie Hearn's Podcast Returns For Third...
He’s now as popular, big, and perhaps as bombastic as the boxers he promotes. Eddie Hearn is also [ ... ]
sports
With 100 Days To Go, Team GB Are Already Set For A Historic...
With 100 days until the delayed Tokyo Olympics, Team GB look set to make history before they have even [ ... ]
sports
Ranking The Best And Worst April Fool's Day Pranks From The...
So another April Fool’s Day has come to an end and as the sun sets on what for some jokers is [ ... ]
sports
The Good, The Bad And The Downright Ugly, What Happens When...
Italian giants Inter Milan have revealed a brand new club badge ahead of the Nerazzurri’s 113th [ ... ]
sports
Ahead Of Hendry Vs White, Here Are The Sporting Rivalries We’d...
As Stephen Hendry and Jimmy White are all set to rekindle their famous old snooker rivalry having been [ ... ]
sports
From Bruno Vs Tyson To Last Chance U: Five Must-See Sports Documentaries...
Rejoice! The end of lockdown is nearly in sight. Sadly, there’s still plenty of time until things [ ... ]
sports
From Eddie Hearn To Jamie Carragher, Here Are Five Must-Reads...
It’s the first Thursday of March and that can only mean one thing: It’s World Book Day. [ ... ]
sports
Amateur Sport To Be Allowed In England From 29 March
Outdoor grassroots sports will return in England from 29 March, prime minister Boris Johnson confirmed [ ... ]
sports
Brady's Bromance, Nadal's City Of Love And The Greatest Love...
Roses are Red,  Violets are Blue, We live for sport, And we know you do, too! Valentine’s [ ... ]
sports
Messi Reaches Goal Number 650 At Barca, Five Weekend Stories...
Lionel Messi continued to boggle the mind with the 650th goal of his Barcelona career, Patrick Reed [ ... ]
sports
The Socially Distant Sports Bar Is Like Being In The Pub With...
The day will come. We’ll be back. The beloved British pub will fling its doors wide open once [ ... ]
sports
The Six-Day Plan That Can Turn You Into A Hollywood Hardman...
Is there an actor who represents the quintessential British hardman better than Jason Statham? Probably [ ... ]
sports
It’s Mahomes vs Brady At The Super Bowl, Five Sport Stories...
In a weekend which saw UFC 257 and the FA Cup grabbing a lot of attention, there was plenty of other [ ... ]
sports
Daniel Craig's Full-Body Bond Workout That Will Turn You Into...
The release of No Time To Die is a bittersweet one. On the one hand, after months of Covid-induced delay, [ ... ]
sports
The Super-Quick Routine Jason Mamoa Used To Get Ready For Aquaman
Is Jason Mamoa the coolest actor in the world? Maybe. The Guinness swigging, axe-hurling Hawaiian actor [ ... ]
sports
Max Holloway Is A UFC Record-Breaker, Five Weekend Stories You...
All the attention might have been on the anti-climax that was Liverpool vs Manchester United this weekend, [ ... ]
sports
From Fernando to Maradona, These Are Five Of The Best Sports...
Yep, back again. Nope, not out and about, meeting up with our mates or heading to the football but instead [ ... ]
sports
The Five Key Moves Cavill Uses To Get In Supernatural Shape...
Netflix’s TV series adaptation of The Witcher proved to be one of the most popular shows to land [ ... ]
sports
Work Out Like A WWE Superstar With John Cena’s Five-Day Training...
He’s widely regarded as one of the greatest professional wrestlers of all-time, has nearly 15 [ ... ]
sports
Conquer Those New Year Resolutions With These Five Fantastic...
During the first quarter of 2020 fitness apps were downloaded a staggering 593million times. Factor [ ... ]
sports
Work Out Like Hollywood’s Hardest Worker, Mark Wahlberg, With...
Mark Wahlberg hits the big 5-0 this year, and in those five decades the man from Boston, Massachusetts [ ... ]
sports
Why The History Channel’s Arctic Edition Of Alone Is Unmissable...
There have been a plethora of crazy TV series in recent years, take The World’s Toughest Race  [ ... ]
sports
Cheeky Chappie Jimmy Bullard’s Fishing Pod Is A Remarkably Down...
Fishing is one the sports that has seemingly proven immune to COVID-19 restrictions. You’re (usually) [ ... ]