High-flying Liverpool will play Championship Bristol City or League One Shrewsbury in the fourth round of the FA Cup.

The Reds’ main focus is on the Premier League title this season but, having got the better of rivals Everton with an understrength side, they will be heavy favourites to take another step closer to Wembley.

Chelsea, winners of the competition three times in the last decade, go to Hull while Leicester will travel to Brentford.

Arsenal, having got the better of Leeds after a half-time rollicking from new boss Mikel Arteta, will play Bournemouth while Tottenham face a trip to Southampton should they beat Middlesbrough.

League One Tranmere will welcome Manchester United or Wolves to Merseyside if they can get the better of Watford in a replay after coming from three down to draw 3-3 at Vicarage Road.

Northampton Town, ninth in League Two and the lowest-ranked side already safely through, will take on England’s record goalscorer Wayne Rooney and his Derby side at Sixfields Stadium.

Match of the Day
@BBCMOTD
This is the full draw for the #FACup fourth round.
More here âž¡ï¸ 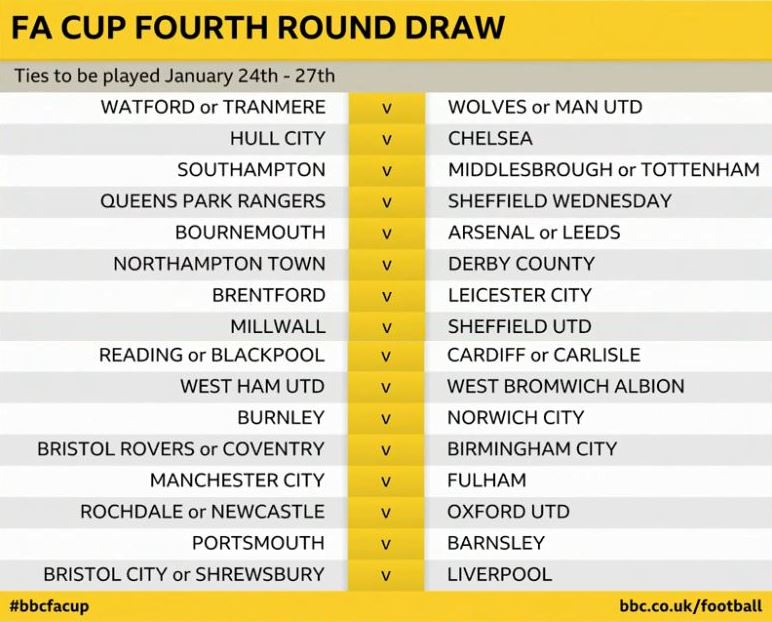 Carlisle, who earned a 2-2 draw at Cardiff while sat 21st in the fourth tier, will play Reading or Blackpool should they win their re-match against the Welsh side.

Intriguingly, it could be landlord vs tenant in the Midlands, as Birmingham could be the away side at their own St Andrew’s stadium, should Coventry, currently sharing the ground this season, beat Bristol Rovers in a replay.

All ties will be played between Friday, January 24 and Monday January 27.