Football
News
Southampton looked a different team in their rampant 3-0 win over Bournemouth at the Vitality Stadium
Simon Lillicrap
14:30, 20 Mar 2021

The FA Cup could just be what saves Southampton this season. A rampant 3-0 win over Bournemouth at the Vitality Stadium booked their place in the FA Cup semi-finals, as Nathan Redmond bagged a brace in an impressive win.

It seemed as if the shackles had been taken off a Southampton side who have been in freefall in the league. Since they beat Liverpool 1-0 on January 4 in the Premier League, the Saints have lost ten and won just one of twelve league games, including a 9-0 loss at Old Trafford. Their slide towards the bottom three has been alarming.

Yet in the FA Cup, Ralph Hassenhuttl’s side are playing with all the excitement and freedom we saw from them earlier in the season, even with injuries to the likes of Danny Ings. With Manchester United, Man City and Chelsea all still in the quarter-finals, actually going all the way is unlikely for the south coast side but now they can dream as the winning feeling returns once again.

The confidence that this win will bring to the squad, and the dangling carrot of a Wembley semi-final could drive Hassenhuttl’s side on to rediscover their form in the league. The bottom three have been edging ever closer to the Austrian manager’s side and they still need a couple more wins to guarantee top-flight football at St Mary’s this season.

No Southampton player will want to miss out on a place in that semi-final line-up, so from now until that game, scheduled for April 17 & 18, players will be fighting for the shirt. If they win that one, the glory of the FA Cup final beckons. This performance against a Bournemouth side, struggling to find consistency under Jonathan Woodgate, was the most enjoyable to watch from a Southampton perspective in some time. In truth, they could have won by more. 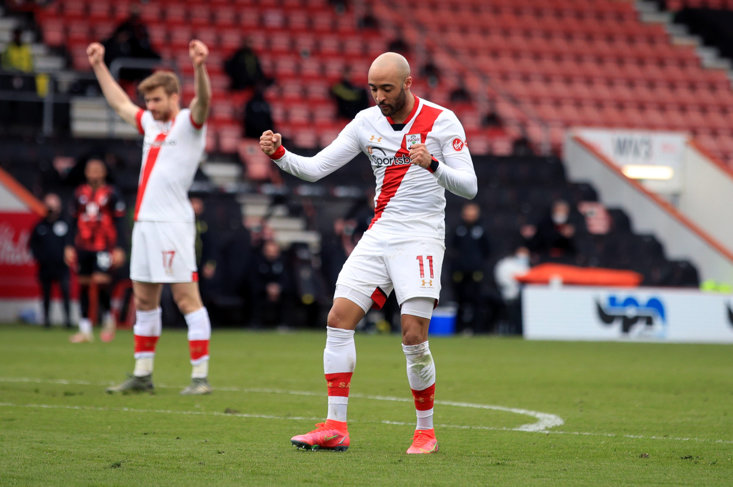 Early on the Saints had a goal ruled out as, after a brilliant ball over the top, Kyle Walker-Peters got in behind and squared the ball which left Cameron Carter-Vickers with no option but to steer the ball into his own net. VAR, which this year was only brought into the competition at this stage, ruled the goal out for a tiny offside margin. The visitors wouldn’t be denied for long.

Ryan Bertrand drove into the centre of the pitch before he drifted in and out and laid the perfect ball on for Moussa Djenepo who curled the ball into the far corner to give the Premier League side into the lead. The magic moment of the quarter-final came just before half-time as the seconds evaporated. Nathan Redmond picked up the ball and began to drive towards goal. He faced Steve Cook and left him for dead, shimmying one way and then the other before the winger clipped the ball into the top corner, past Asmir Begovic. That marked his first goal in fifteen games as the sides were clearly gulfs apart.

The dominance continued after the break as Hassenhuttl’s side kept the pressure up. Woodgate in the Bournemouth dugout was helpless to prevent his side going 3-0 down, even if they escaped a drubbing after a Che Adams finish was ruled out thanks to another VAR offside decision. It was Redmond who was influential yet again in the third goal when it eventually came, as he first laid the ball off to Stuart Armstrong who rattled the post before he calmly guided home the rebound at the first time of asking.

Man of the Match Redmond went close to completing his hat-trick as he whistled one past the Bournemouth post in a result that could have been so much worse for the home side, but all the signs on the south coast were promising for Hassenhuttl’s men.

The Premier League has been a dour struggle recently, but the FA Cup can continue to provide the perfect tonic for Southampton.