New season, same old St Helens. The Betfred Super League champions might not have been at their brilliant best on Friday night, but they did more than enough to suggest they remain the team to beat as they saw off Salford Red Devils 29-6 on opening night at Emerald Headingley.

A dominant first-half display was a sign of things to come as Kristian Woolf’s side went in with a 13-0 lead which could so easily have been up to 20 points more emphatic on the balance of play. And while they lost new signing Agnatius Paasi through concussion after a huge collision with Pauli Pauli early in the second half, there were very few negatives about Saints’ performance and Theo Fages' kicking game proved Salford's undoing.

It is what we have come to expect from the back-to-back champs, and they have now won 20 and drawn one of their 26 round one fixtures in the summer era, emphasising their ability to always get off on the right foot.

This was by no means a repeat of their clash with Salford on opening night in 2020 though, with the Red Devils putting up a far better defensive performance to ensure that last year’s 48-8 defeat was never likely to be matched no matter how much Saints were clearly the better side. 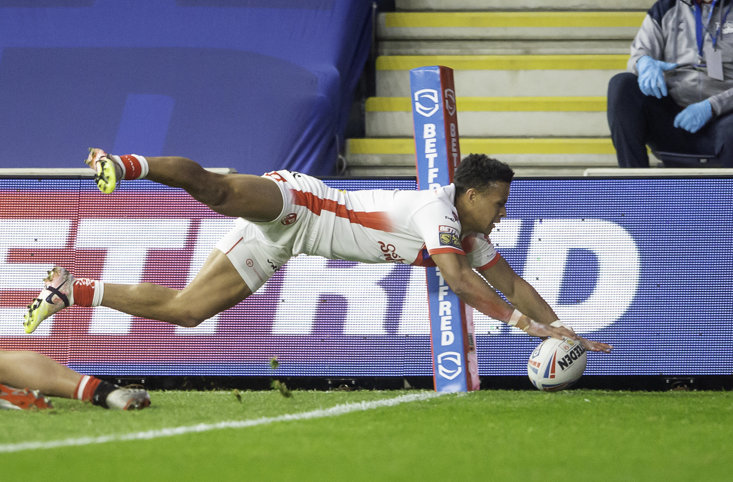 Tommy Makinson got the champions going early on when he beat Krisnan Inu in the air to collect Fages’ kick at the second attempt and plant the ball down just as he was falling into touch. While Jonny Lomax and Mark Percival both then had tries disallowed, Regan Grace went over in the left corner to give St Helens a 12-0 lead which was supplemented on the stroke of half-time by Grand Final hero Jack Welsby’s drop-goal.

Despite being put under sustained pressure, the Red Devils were right back in the game when Tui Lolohea’s cut-out pass put Ken Sio in at the corner to reduce the gap to 13-6. But it took Saints no time to regain their 13-point lead, with another Fages kick seeing Percival beat Dan Sarginson in the air and go over for a crucial try.

Fages collected a third kick assist late on when Inu spilt another bomb, leaving Kevin Naiqama with a walk-in, and Alex Walmsley stormed his way through a tiring defence to round out the try scoring and leave Makinson with the straight-forward task of kicking his fourth goal of the night.

In the later game, Wigan Warriors came back to edge out Leigh Centurions after John Duffy's side had taken a shock 18-0 first-half lead. Liam Hood, Iain Thornley and Ben Hellewell all crossed in the first 26 minutes as the Super League newcomers threatened to embarrass the most storied club in rugby league.

But Jake Bibby got Wigan back into it with a try and an assist for Zak Hardaker, then Joe Bullock added a third try after the break. Bibby's second of the match levelled the scores, with Hardaker's second goal giving the warriors a narrow 20-18 victory.