The 21-year-old from China claimed a famous 10-9 shock final victory in Milton Keynes to deny the Rocket a record-extending 39th success in such tournaments.

World No80 Fan was a 750-1 shot to win this event  - the second time six-time world champion and world No2 O’Sullivan has suffered this outcome to a rank outsider in 12 months.

A year ago the 46-year-old, 25 years Fan’s senior, lost to world No81 Jordan Brown who had started at the same odds in the final of the Welsh Open.

But this was first and foremost a wonderful breakthrough moment for Fan, the latest winner from a frightening wave of young Chinese talent sweeping through the game.

He pocketed £80,000 for this win – considerably more than his earnings from the last four years in total before last week.

Fan is based at the Victoria Academy in Sheffield during the season where he is a regular practice partner of reigning UK champion Zhao Xintong and former Masters champion Yan Bingtao.

Fan said: “When I beat Kyren Wilson last week I started to think I could win this event, it gave me the confidence – but I didn’t expect this, and to beat Ronnie in this final.

“To play him in a final already in my career is a dream come true. He is the idol of all the Chinese players because he is very generous to us.  I just tried to win it frame by frame. Every day I practice with Yan Bingtao and Zhao Xintong, and that has helped me improve so much.”

O’Sullivan said: “Fan was the better player all day and fully deserved it. I think the young Chinese players are all pushing each other on at the moment, like Federer and Nadal did.

“It is a pleasure to play a new talent like this, and I can’t pot like these guys – they are frightening. It’s the same the UK can’t copy the format because we are getting left behind. If we are not careful it will be like table tennis and we will get batted off the park.

“He was brilliant and I was trying to hang on and make a game of it. It’s great for Chinese snooker and these young guys.” 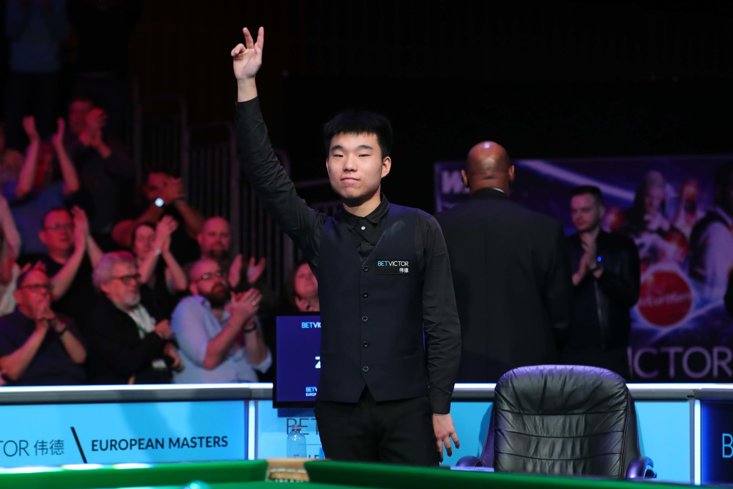 One possibility was that Fan, on such a huge and new stage and up against the best player ever to pick up a cue, might just crumble. But from early on it was clear that rather than suffering from nerves the youngster was both relishing his opportunity and bang up for the challenge.

From the moment the Chinese player got his first frame on the board to level at 1-1 he went toe to toe with O’Sullivan – who if anything was struggling to stay in touch.

A break of 57 to go 2-1 ahead proved just a warm-up, even if O’Sullivan levelled at 2-2 by the first-session afternoon interval. Fan then made further runs of 63 and 78 to open up a two-frame advantage, only for the Rocket to peg him back again at 4-4 by the end of the first eight frames.

During that eighth frame that saw O’Sullivan knock in a decisive 83, he paused mid-break for a bizarre if good-humoured exchange with referee Leo Scullion and the packed crowd.

He was heard saying: “There is nothing worse than when you’re playing and you’re potting a ball in that pocket and someone is moving…it puts you off a little bit, you know?”

But when Scullion responded by demanding: “Can you keep still, please?” to the area indicated by the Rocket, O’Sullivan added: “No, no one was moving…I’m just saying if he was moving about when I’m potting a ball in that pocket, it is off-putting.

And as the crowd started to laugh, he added: “And if his phone is going and he’s got Youtube on it, that’s quite off-putting too, so from now on if they could just bear that in mind while we’re playing, that would be great!”

But the evening saw Fan knock in first the highest break of his life - a 135 – and then make that back-to-back centuries for the first time with a 110 to go 6-4 up. His vastly more experienced once more hung in there to gain parity at 6-6 but had still only made one break of 50 or more at this stage.

Again Fan went two clear before the world No2 cut loose with a 107, but a tense 16th frame with errors from both was taken by the six-time Crucible king to make it effectively a best-of-three.

Fan edged ahead yet again with an 82 before O’Sullivan forced the decider – however the 21-year-old held his nerve with a break of 92 under the most severe pressure for a dream success.