The Fantasy Premier League deadline is fast approaching so it is time to finalise those teams and stop tinkering! The pre-season matches are over, we can stop stressing about injuries and finally welcome back the Premier League stars and green arrows. The Sportsman lot have picked and submitted their final FPL teams for you to rate, slate or hate. Can you do any better than this?

With a very cheap Danny Ward looking likely to be in net for Leicester early this season, an easy pivot with Robert Sanchez at Brighton solves the GK problem in my team.

Like most FPL managers, I'm going big with Trent Alexander-Arnold, Joao Cancelo, Reece James and Andy Robertson, with Diogo Dalot at £4.5m a steal in the Manchester United defence.

I'm definitely not playing without Mo Salah, who I'll captain most gameweeks, with Marcus Rashford and Gabriel Martinelli two players who could easily outperform their relatively low prices.

Up top, you can't leave out Gabriel Jesus who's owned by everyone, and I'm still toying between Harry Kane and Erling Haaland for my £11.5m premium striker spot. Haaland's fixture against Bournemouth in gameweek two could be just too tempting to ignore.

On the bench I've got Pedro Neto at Wolves who will have a great season, Andrea Pereira at Fulham, a £4.5m starter, and good old Sam Greenwood who won't see any minutes in my team, but allows for some of the big guns in the starting XI. 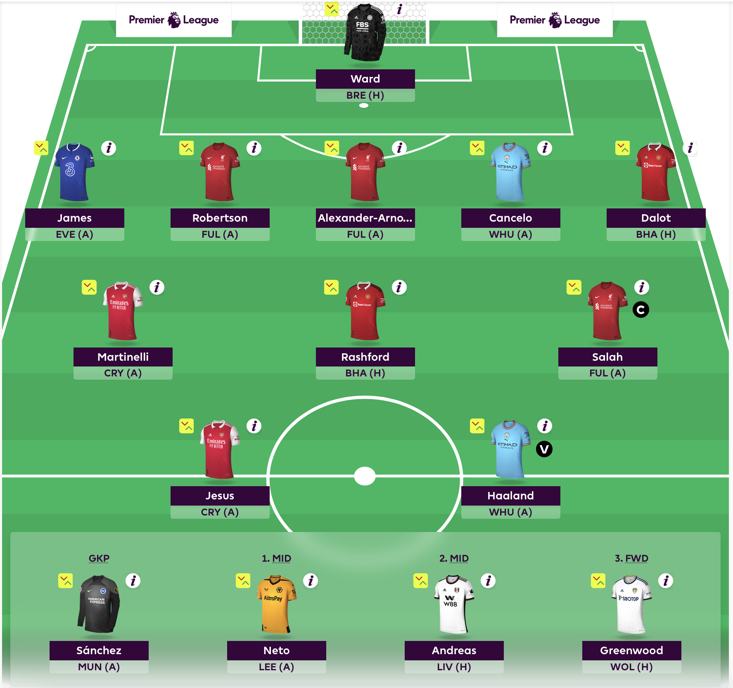 Like every manager heading into the new season, some doubts are starting to rise, but I genuinely think I’ve nailed it this year. Jordan Pickford has remained in this team from day one, and I think he’s being overlooked given how good his fixtures are after that Chelsea opener. TAA and Cancelo speak for themselves, while Oleksandr Zinchenko is worth the risk at £5m in case he plays out of position at Arsenal. Then, another hidden gem for me is Kyle Walker. £5m for a guaranteed Man City starter over the first few gameweeks? Yes please.

Salah and Luis Diaz mean I’m tripled up on Liverpool although I have FOMO about Robertson. I wanted Riyad Mahrez but had to settle for Jack Grealish who is £1m cheaper and I wanted Jadon Sancho but had to go for Marcus Rashford for financial reasons.

Up top, I’m Haaland-less which leaves me worried, but Jesus is a must-have and Kane provides some certainty. I don’t want to go without a Spurs asset and am hopeful my trio of Man City players can soften any Haaland related blow. 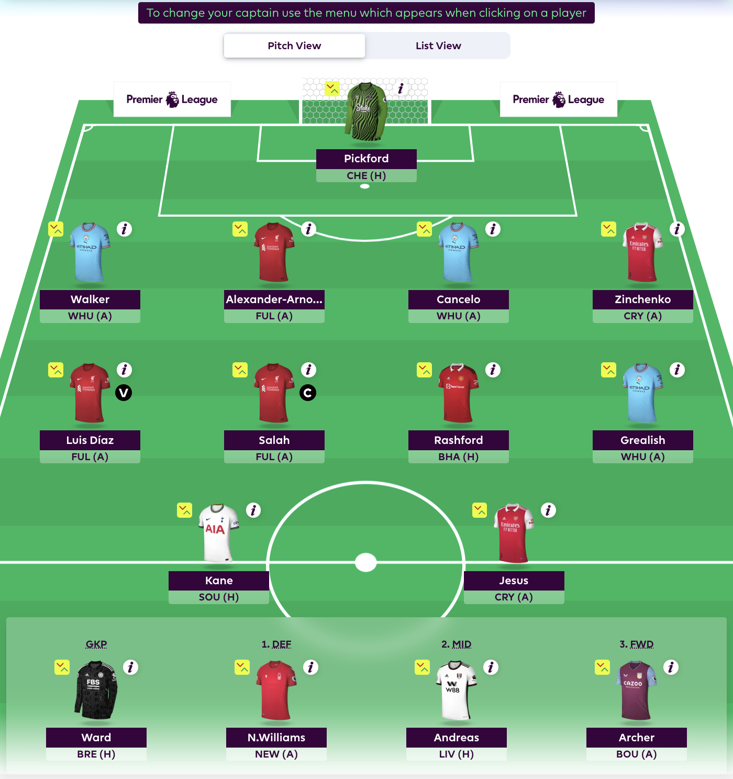 I have decided to stick with my first draft from last month because right now I feel like this is a strong team to have for the start of the season. I always used to prioritise the most expensive attackers and midfielders, leaving just a cheap defence. I now know that having good defenders is the way to go. I feel like there is strength in depth in my starting XI. TAA, Cancelo and Ivan Perisic should give attacking returns while I'm excited to see how Martinelli gets on, he could be the value pick to have in midfield.

Yes, I still haven't opted for Salah, but I am confident Diaz will have a successful first full season at Liverpool and I feel there is just as much to come from Son Heung-min again. Up top, Jesus and Haaland will bang in the goals, while having Son allows me to leave out Kane. 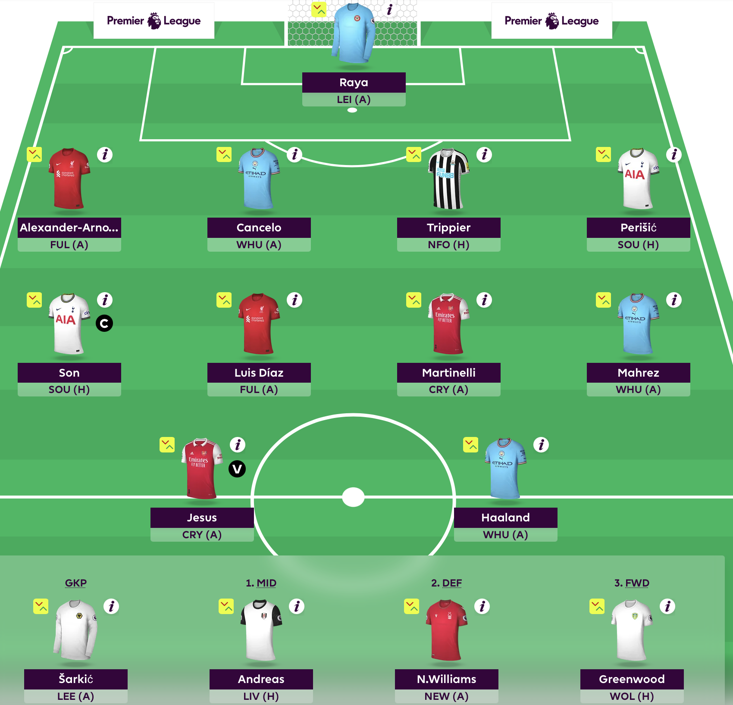 Some tough decisions have been made in the preparation of building this team. The goalkeepers are not the flashiest, but Robert Sanchez’s form last season is enough to have him starting, and Danny Ward is set to be Leicester’s only choice of keeper when Kasper Schmeichel leaves. The defence is full-back heavy, but I expect Sven Botman to get better as the season progresses and enter the team.

The money is very much in midfield, with Salah and Son expected to garner most of the points, and I’m hoping an upturn in fortunes for Rashford and Miguel Almiron after successful pre-seasons will deliver in the league this year. Up top, Kane is the focal point but I expect Taiwo Awoniyi to be a regular starter for Forest, and if he’s on form like he was for Union Berlin last year, then he’ll add plenty. Patson Daka should be taking over the helm as Leicester’s main striker so I’m hoping he can deliver this year too. 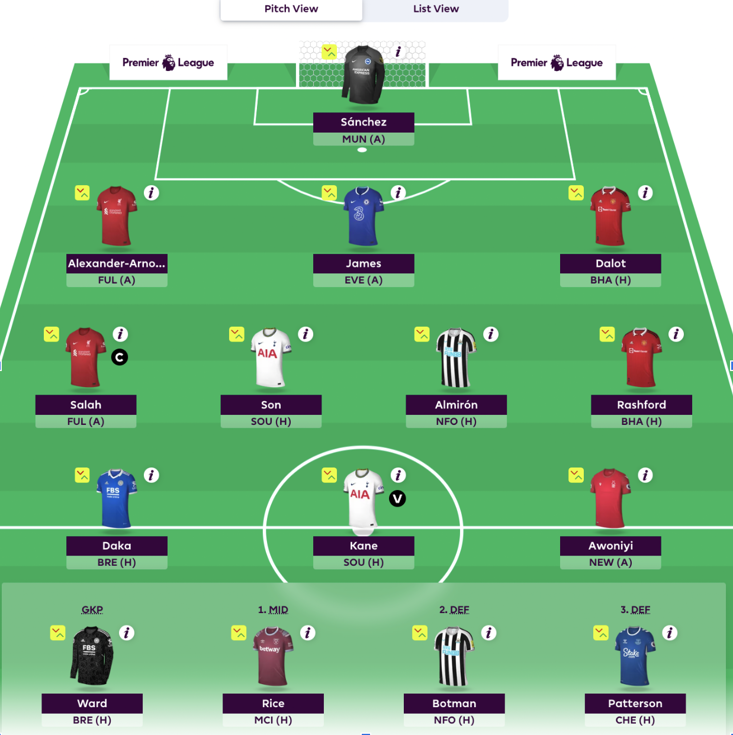