The third Fantasy Premier League gameweek is upon us and managers are faced with a few dilemmas to contend with for the first time this season. Mo Salah and Heung-min Son blanked and Erling Haaland only managed an assist in a difficult weekend for the popular captain choices. But the main story was saved for Monday night as Darwin Nunez launched a headbutt at Joachim Andersen, and was shown a straight red card.

Now out for the next three games, it comes as no surprise that he is the most transferred out player in the game this week, as 760,000 managers have cut their losses and got rid of the £9.0m forward. It leaves a gap in the squad and funds in the bank, so for our gameweek three preview, we’ve looked at how to get the most out of your forward line without Nunez.

Whether you are on the Haaland hype or staying loyal to Harry Kane, it seems crazy to go without one of the two premium forwards this season. The England captain got off the mark against Chelsea in the dying seconds following on from Haaland’s brace on the opening day, but given the 0.3 price difference that has emerged between the two, it is difficult to jump to the Man City forward from Kane.

Given Kane faces Wolves at home in the early kick-off, it is a case of staying put with what you have in terms of premium forwards. However, in the other two spots, we have excellent options. A must-own for Fantasy Premier League this season, and especially over the next few weeks, has to be Arsenal’s Gabriel Jesus.

The Gunners’ front man scored twice and got two assists on his home debut against Leicester, returning a whopping 19 points - the highest from a single player across the entire weekend. His price has now risen to £8.1m, but he is still a bargain. With Bournemouth, Fulham and Aston Villa to come in Arsenal’s next three, this is a bandwagon you can’t miss. He’s now owned by 77% of managers in the game, which is the highest ever, so missing out on his points will see your rank drop drastically. 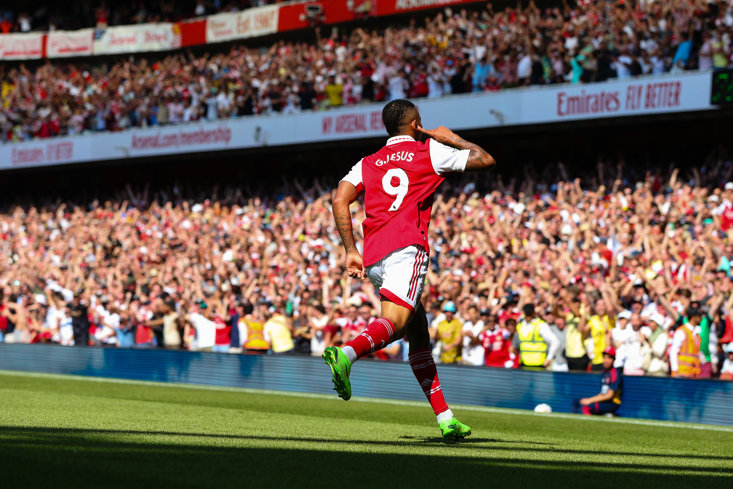 So that is two spots filled, and now we have reached a point in the game where it seems sensible to spend a bit more up front to make sure you have three starting forwards. The value picks in midfield, aside from Rodrigo, haven’t paid off and neither have those premium defenders, with Liverpool failing to keep a clean sheet in their opening two games.

So going for a three-pronged attack seems like a sensible option, and there are some top strikers available at a lower price point. Ollie Watkins at £7.4m proved himself to be a key man for Aston Villa in GW2 with two assists, having been dropped in GW1 and Steven Gerrard got a much better display out of his side when Watkins was on the pitch.

However, Villa are approaching a rough patch of fixtures so it may be worth biding your time on Watkins and looking elsewhere. Aleksandr Mitrovic got off to a flyer with a brace against Liverpool and should have been on the scoresheet against Wolves but unfortunately missed his penalty. All the signs so far point to the £6.6m man continuing his goalscoring form from the Championship this time around and with a game against Brentford, he could hit the net again.

But the top pick around this price point has to be Ivan Toney. He surprisingly failed to score against a beleaguered Manchester United in that 4-0 win but he did register two assists and is now flying into a green run of games. Fulham, Everton, Crystal Palace, Leeds and Southampton are as easy as it gets in the Premier League, and Toney will be looking to bag a hatful over the next month. His price has increased to £7.1m as his ownership goes above 10%, but it's still decent value for a striker of his ability, who also takes penalties.

Whichever forwards you decide to plump for this week, it is always worth keeping your transfer free where possible, and certainly not spending more than four points per gameweek. Look ahead to the next six fixtures, and make your selections with your head, not your heart.

x
Suggested Searches:
The Sportsman
Manchester United
Liverpool
Manchester City
Premier League
More
football
Why Do We Love Our Football Club - Part Two: The Stadium
In this five-part series, The Sportsman will be exploring one of football's biggest questions. Just [ ... ]
football
Former Chelsea Midfielder John Obi Mikel Retires From Football
Former Chelsea midfielder John Obi Mikel has announced his retirement from football. The Nigerian has [ ... ]
football
England v USA Squad: Lucy Parker And Jess Park Earn First Lionesses...
Sarina Wiegman has recalled Fran Kirby and Euro 2022 final hero Chloe Kelly to the England squad, while [ ... ]
football
Jude Bellingham: Birmingham City Fans Knew He Was Destined For...
Across the whole of Europe right now, there is one player on everyone’s lips. Jude Bellingham [ ... ]
football
Out Of Time: The World Cup Is Arriving At The Worst Moment For...
World Cups are supposed to be in summer. They just are. But sometimes a break from tradition can be [ ... ]
football
Chris Wilder To Bournemouth: What's Gone Wrong For Wilder At...
It was set to be the match made in heaven, but now Chris Wilder is in the middle of a nightmare as the [ ... ]
football
Gareth Southgate's Eight Nailed On England Starters For The...
That’s it. All the warm-up games are now done and although England are now six without a win, [ ... ]
football
LIVE Football Blog: Final Day Of Nations League As International...
At long last, the international break comes to an end tonight with the final round of UEFA Nations League [ ... ]
football
Scotland's John McGinn Targets Nations League Promotion Amid...
He captained his country to two significant victories, earned his 50th cap and became Scotland’s [ ... ]
football
England 3-3 Germany: Southgate's Subs Lift The Mood As Goalscoring...
When Gareth Southgate’s England side were battered and bruised against the ropes, their nose bloodied [ ... ]
football
Why Do We Love Our Football Club - Part One: The Fans
In this five-part series, The Sportsman will be exploring one of football's biggest questions. Just [ ... ]
football
Long Live The Meaningless Friendly: Why The Nations League Has...
The dust has settled on England and Wales’ relegation from Nations League Group A. The ramifications [ ... ]
football
The Search For Harry Maguire: England’s Most Confounding Footballer
Harry Maguire is English football’s greatest enigma. Everyone has an opinion on what he is and [ ... ]
football
Watford Sack Manager Rob Edwards With Slaven Bilic Announced...
Rob Edwards has been relieved of his duties as Watford boss just 10 games into the Championship season. [ ... ]
football
Eric Cantona Offered To Become Manchester United's First President...
Legendary former Manchester United star Eric Cantona has revealed that he offered his services to take [ ... ]
football
Why Trent Alexander-Arnold Shouldn't Be In England's World Cup...
It’s the experiment that causes more debate than any other. But after being omitted from the England [ ... ]
football
LIVE Football Blog: England Host Germany In Final Game Before...
England return to Wembley tonight to compete in the Three Lions' final game of their Nations [ ... ]
football
Southgate Should Let Attackers Play With Freedom Against Germany
The mood surrounding the England national team isn’t great. We are less than two months away from [ ... ]
football
Missed Chances And Lewandowski Magic Relegates Wales
Wales have been relegated to League B of the UEFA Nations League after suffering a 1-0 defeat against [ ... ]
football
Chelsea Overcome Poor First Half Against Manchester City For...
Reigning Women’s Super League champions Chelsea are up and running this season as they defeated [ ... ]
football
Live Football Blog: Women's Super League + Wales Take On Poland
Good afternoon football fans! We've got Women's Super League action on the menu today as West [ ... ]
football
Grading Every Premier League Club So Far: A's For Arsenal, Fulham...
The international break is here and so what better time for Premier League clubs to take stock of their [ ... ]
football
LIVE Football Blog: All The Latest News From The World Of Football
Today we get our afternoon started with the Women's North London Derby between Arsenal and Tottenham, [ ... ]
football
What The 'Big Six' Premier League Managers Need From This International...
International breaks are strange times when you’re a club manager. At the top end of the Premier [ ... ]
football
Granit Xhaka: Arsenal Midfielder's Renaissance Is No Surprise
Arsenal have been a joy to watch. When was the last time we said that? Mikel Arteta’s side [ ... ]
football
Italy 1-0 England: Three Lions Relegated From Nations League...
England fell to another painful defeat to Italy which this time saw them relegated from League A of [ ... ]
football
Women's Super League Week 2: Arsenal Hammer Spurs In North London...
Arsenal 4-0 Tottenham Hotspur  The North London Derby at the Emirates Stadium didn't disappoint, [ ... ]
football
Brendan Rodgers Has Punched Above His Weight At Both Liverpool...
Brendan Rodgers is sleeping with a suitcase under his bed right now. It feels like this is the end game [ ... ]
football
Bukayo Saka Named England Player Of The Year For 2021-22
Bukayo Saka has been named as England’s Player of the Year for the 2021-22 season. The winger [ ... ]
football
England News: Pope, Henderson And Ramsdale Jockey For Pickford's...
England head into their upcoming international fixtures without Jordan Pickford. The Everton shot-stopper [ ... ]