Football
News
Ronaldo's gone and the Glazers could follow. It's all change at Old Trafford
Joey Mills
13:00, 23 Nov 2022

You can certainly see why a generation of fans have grown to hate Manchester United. Nine years removed from their last league title, the Red Devils still command attention like no other English club. As Mexico and Poland played out a goalless draw in Group C of the World Cup, the first of two waves of news emanated from the 20-time league champions.

The announcement that Cristiano Ronaldo would be leaving Old Trafford “by mutual agreement” snatched all the attention away from football’s biggest tournament. Perhaps if Mexico and Poland weren’t playing out a bore draw it would have been harder to steal the spotlight. But both Ronaldo and his former club have a way of commanding the narrative, even when both their powers are sharply on the wane.

But the jaw-dropping intel hadn’t finished emanating from Old Trafford. The club would later announce they were “commencing a process to explore strategic alternatives for the club”. United at least waited for France’s scintillating 4-1 victory over Australia to finish this time, a rare example of the ruling Glazer family recognising the need for tact.

The statement went on to say that the Glazers were open to “all strategic alternatives, including new investment into the club, a sale, or other transactions involving the Company.” Long-suffering supporters will be hoping for a sale. As with the Ronaldo situation, it feels like a clean break is the best move for all parties.

If the controversial American family retains even a small stake in United, fans will find it hard to fully trust any decisions the club takes. After a 17-year period that has fractured the fanbase and seen the club go into on-pitch freefall, a total sale seems like the best outcome.

There is encouragement to be found for those United fans hoping to see the back of the Glazers. United have appointed The Raine Group as their exclusive financial advisors for this process. Raine managed the sale of Chelsea from Roman Abramovich to Todd Boehly and Clearlake Capital. They have proven they can deliver the sale of a major Premier League football club. Beleaguered Red Devils fans will be hoping they can do so again.

The timing of the two announcements felt poetic. Ronaldo and the Glazers are twin-monoliths that have dominated the discussion of United on and off the pitch respectively. The fact one has been dislodged and the other could soon follow is significant. Manchester United have reached the most pivotal point in their recent history. In one fell swoop, the club find themselves facing their biggest upheaval since the retirement of Sir Alex Ferguson almost a decade ago. 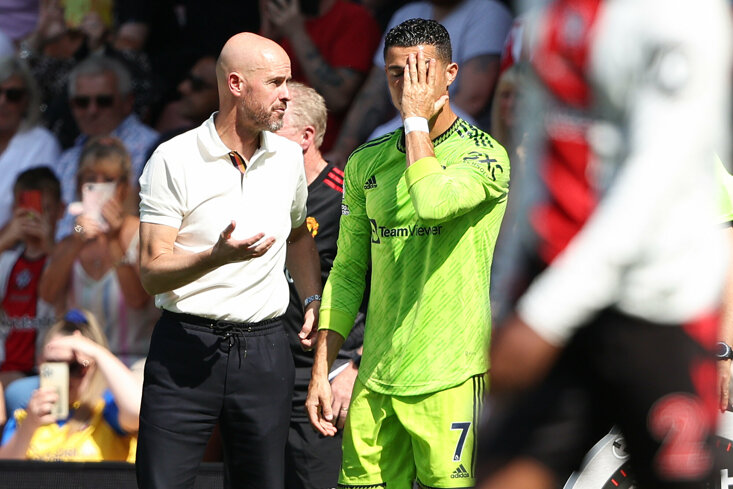 The removal of Ronaldo is a show of faith in the philosophy and personality of the manager, Erik ten Hag. The ex-Ajax boss favours the collective over the individual, while Ronaldo is the most individualistic player of his generation. Drawing a crucial disciplinary line after his incendiary comments during the infamous Piers Morgan interview was a vital step towards a more cohesive United. After years spent in thrall to troublesome stars like Ronaldo, Paul Pogba and Angel Di Maria, the Red Devils have finally reclaimed the “no player is bigger than the club” mentality that allowed Ferguson to thrive.

The club is also a more saleable asset than it was a year ago. Under Ole Gunnar Solskjaer and latterly Ralf Rangnick, United were eroding on the field. Coupled with fan protests and the bitter aftertaste of the European Super League debacle, the club was more trouble than it was worth to investors. But with a bright new coach, some excellent signings in Casemiro, Antony, Lisandro Martinez and Christian Eriksen, things are looking up. An injection of cash and the sort of infrastructure and stadium improvements the club’s creaking facilities are begging for could change the complexion of United.

The more considered reds will be worried about where that injection of cash comes from. Much of the club’s Twitter following would take investment from Satan himself if it meant signing Kylian Mbappe. But the match-going fanbase is more discerning, as evidenced by a faction of them breaking away to form FC United of Manchester when the Glazers took over. Investment from countries with questionable human rights records, like at Manchester City and Newcastle United, will serve to divide the fans further. Not all money is good money in football, and loyal supporters will be hoping their new owners have moral as well as financial interests.

Manchester United are entering the most important period in their recent history. Get this wrong and they will never make up ground on City, Liverpool and their other rivals. Get it right and another era of success awaits. Ronaldo won’t be part of that era, but Ten Hag will. The Dutchman’s appointment feels like the first building block towards a brighter future. But that remains contingent on exactly what “strategic alternative” ends up taking hold at Old Trafford. The identity of the new owner or investor will change the course of United’s history.