Bruno Fernandes fired a ferocious right-footed piledriver past Freddie Woodman in the Newcastle United goal on Saturday afternoon, serving a timely reminder of his importance to Manchester United. While the debut of his Portugal teammate Cristiano Ronaldo stole hearts and headlines at Old Trafford, Fernandes scored the goal of the day. It is poetic that Bruno chose this stage to unleash one of his finest strikes, as there is an argument that Ronaldo is coming to a version of Manchester United that Fernandes built.

Manchester United were fifth when Fernandes signed from Sporting CP for an initial £47 million fee in January 2020. Ole Gunnar Solskjaer’s side had just suffered a limp 2-0 home defeat to Burnley, and found themselves six points off the top four. Gallingly, they were 14 points behind third-placed Leicester City. Come the end of an admittedly Covid-warped season, and United sat third, with Leicester finishing in the fifth position previously occupied by the Reds.

Fernandes had transformed United, logging eight goals and seven assists in just 14 Premier League games. United went on a 14-match unbeaten run, much of which was down to the hurricane of attacking threat wearing the number 18 shirt. Bruno had arguably the greatest team-wide impact since Eric Cantona joined from Leeds United in 1992.

Bruno’s incredible impact has continued. United finished second last season in Fernandes’ first full campaign, and he was once again the standout player. He also helped steer United to a first cup final since 2018 when they reached the Europa League final. While obviously the Portuguese attacking-midfielder is not solely responsible for United’s improvement over the last two seasons, he has clearly reinvigorated the side. 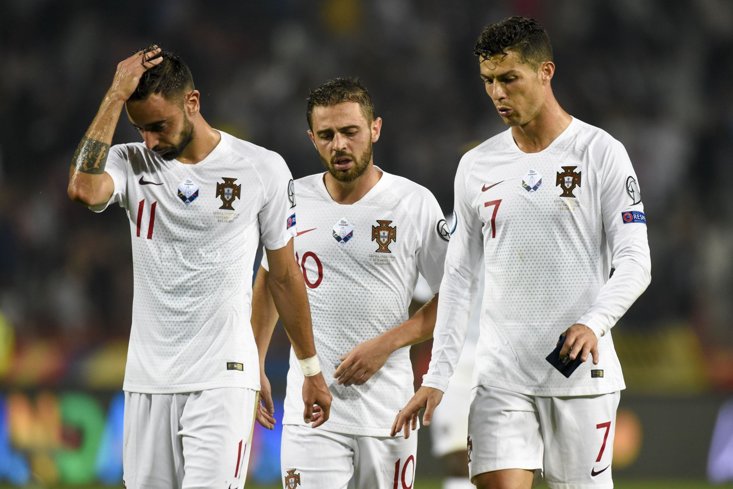 FERNANDES DOESN'T HAVE A GREAT RETURN PLAYING ALONGSIDE RONALDO

For the first time since his arrival, Fernandes is no longer seen as the headline attraction at Old Trafford. United’s top creator and goalscorer since setting foot through the door, Fernandes now has to share top billing with Ronaldo. ‘Share’ may in fact be charitable, as despite him being 36 years of age, attention and intrigue follows Ronaldo wherever he goes. It will be fascinating to see whether Fernandes thrives on having his national teammate alongside him, or struggles to adjust to ceding his role as United’s main attacking outlet.

Fernandes’ goal numbers drop considerably for Portugal, with the United man notching five in 36 caps. Obviously Portugal are set up differently to how Solskjaer instructs his side to play, but it is interesting that Bruno scores less when playing alongside Ronaldo.

If there is a problem in how the two pair up tactically, it is not one that bothers Fernandes. Apparently Ronaldo’s international teammate was instrumental in engineering the move that brought the Juventus forward back to Old Trafford. Fernandes made a joking tweet dubbing himself “Agent Bruno” when news emerged of his part in encouraging Ronaldo to forsake the blue of Manchester City and join Manchester United. United fans can take solace from the fact these do not feel like the actions of a man who feels he can’t play with Ronaldo.

On the tiny sample size we have been offered, it appears the illustrious Portuguese internationals can dovetail for their club. While a 4-1 rout of Newcastle is not enough to judge, the early signs were encouraging. It did take the Red Devils a while to establish their rhythm, with Steve Bruce’s men defending resolutely for almost the whole first half. But when United hit their stride, they never looked back, and Fernandes and Ronaldo both scoring will be a comfort to fans worried the pair may not gel.

Tonight’s Champions League clash with Young Boys will be another opportunity for United’s Portuguese attacking axis to prove themselves, as the returning hero and the man that built this latest iteration of the club combine once again. Even if Ronaldo scores, and claims the newspaper backpages in the process, Reds devotees won’t forget his importance to this side in a hurry.

Bruno Fernandes is 7/2 to score first against Young Boys tonight with Betfred. https://www.betfred.com/sports/event/20689753.2