On this St Patrick’s Day, we thought it only appropriate to celebrate Ireland’s incredible heritage in the realm of combat sports. The Emerald Isle has produced world class talent across boxing, MMA and professional wrestling for decades. Here is a rundown of just some of the unbelievable Irish men or women that have illuminated the ring and the cage over the years.

The undisputed lightweight champion of the world is quite simply one of the best fighters, male or female, on the planet. A hugely decorated amateur, Taylor capped her unpaid career with gold at the London 2012 Olympics.

Since turning professional she has amassed a gleaming 20-0 record and world titles at two weights. A trailblazing superstar of the sport, Taylor will take on her toughest challenge yet next month. ‘The Bray Bomber’ will meet Amanda Serrano at Madison Square Garden on 30th April in what is set to be the biggest women’s boxing match in history.

As brash and abrasive as he is brilliant, ‘Notorious’ changed the way the fight game is played. The swagger, wit and ring smarts of McGregor have made him one of this eras most captivating combat sports figures.

The first fighter in Octagon history to hold titles at two different weights simultaneously, McGregor made his name on statement wins over Jose Aldo, Nate Diaz and Eddie Alvarez. He passed from elite sportsman to cultural figure in his Boxing vs MMA superfight with Floyd Mayweather. The Irishman lost on the night, but his star shone more brightly than ever in the aftermath.

Few professional wrestlers have spanned eras and promotions as well as the Carrickfergus brawler. Making his first televised appearances on the iconic World of Sport programme in the UK, Finlay battle through Europe and Japan before reaching WCW. Debuting in the States as The Belfast Bruiser, Finlay became popular for his intense physical wars with Blackpool ex-pat and future WWE superstar Steven Regal.

After several years in Atlanta, Finlay moved to WWE when they purchased WCW in 2001. Initially working as a trainer, the veteran made a surprising return to in-ring competition in 2005. It ended up being the most successful run of his career. Finlay was a fixture in matches with top names like JBL, the Undertaker and Batista. Leaving the company in 2011, Finlay proved himself against a new, emerging generation of talent on the independent circuit before retiring and returning to WWE as a trainer. 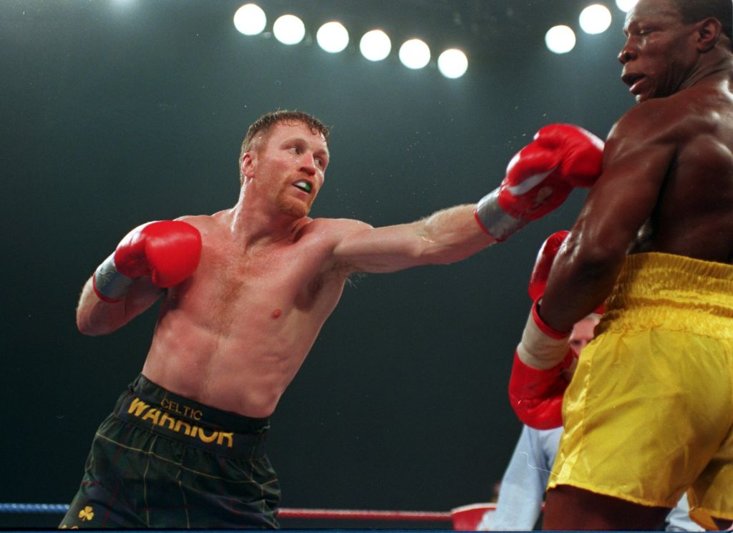 Every great era in sport must come to an end. It is rare that such an end comes decisively at the hands of one man. That’s exactly what happened when Steve Collins single-handedly erased the English-led middleweight boom of the 1990s.

Already the reigning WBO middleweight champion, Collins beat Eubank for the WBO super middleweight crown via unanimous decision in 1995. Later that same year, he retained the belt in a rematch on a split decision.

Nigel Benn was the next pillar in his sights, and this time the results would be even more decisive. ‘The Dark Destroyer’ was stopped in four and six rounds across two battles for Collins’ crown. A new era was upon us, and it was the era of ‘The Celtic Warrior’.

‘The Irish Lasskicker’ is a trailblazer, throwing off the shackles of the previously-marginalised women’s division to become one of wrestling’s biggest names. Lynch took part in the first women’s match to headline WrestleMania when she faced Charlotte Flair and Ronda Rousey in 2019.

At this year’s ‘Showcase of the Immortals’, Lynch faces Bianca Belair in defence of her SmackDown Women’s Championship. Fans know to expect something special from Becky Lynch on the biggest WWE show of the year.