Football
News
There is always something special in the air each time Gremio and Internacional meet
Joshua Law
16:55, 12 Mar 2020

Ask Brazilians what the biggest derby in the country is and, depending on where you find yourself in its continental landmass, you’ll receive varied responses. They might talk about Flamengo and Fluminense, the royalty of Rio de Janeiro.

You could hear about Corinthians and Palmeiras, two giants of industrial Sao Paulo, or Atletico and Cruzeiro from Belo Horizonte. In the north-east people will wax lyrical about Bahia vs. Vitoria, and in the north about Remo and Paysandu.

But no matter where you find yourself, one double act will always, always be mentioned with reverence, even by fans of other sides: Gremio and Internacional. There is something special in the air each time the two clubs from Porto Alegre meet. And on Thursday night, that atmosphere will be amplified.

GreNal 424 – each derby is billed using the number of times they have clashed – will be the first time these sides have faced each other in the hunt for the Copa Libertadores, the holy grail of South American football. In the 423 derbies that have preceded this one, there have been few more significant.

Up until the late 1950s, Brazilian football was played only on a regional basis owing to the size of the country, so local rivalries were played endlessly and took on an even greater importance than in other parts of the world.

Putting your finger on exactly why this, of all the wonderful derbies across the country, is so frequently cited as the country’s most intense and passionate, then, is no small task.

For Jeremias Wernek, a sportswriter for UOL who hails from Porto Alegre, it has a lot to do with the fact that for locals, there is no middle ground. “Rio Grande do Sul has the firm positioning of its citizens as a cultural mark”, he says. “Either you are this or that, either left or right, either Brizola or Pedro Simon [two local political heavyweights].

In this context, Gremio and Internacional complete each other. Neither Gremio nor Inter is bigger, but the GreNal is the greatest product of Rio Grande do Sul. It comes from everything being polarised.”

Porto Alegre is Brazil’s southernmost state and as such is heavily influenced by its Rioplatense neighbours, Argentina and Uruguay. The accent and diet are distinct, the climate much harsher in winter. The people, known as Gauchos, have consequently always felt a little different from the rest of Brazil, even superior.

As I heard from Grêmio youth-team coach Wagner Gonçalves when I went to visit the club in June, reporting for Yellow and Green Football, “The history of Rio Grande do Sul state is based on conflict… It’s like the Basques in Spain. They have their own identity; they stood up to the empire. Gauchos are fighting people.”

In the 19th Century, there was a 10-year war of independence fought in the state, the Revolucao Farroupilha, which roughly (and rather wonderfully) translates as the ‘Ragamuffin Revolution’. Though the separatist feeling has died down in recent years, that fighting spirit carries over into the culture and, of course, the football.

Wernek explains: “[Gaucho] people think, ‘We’ve been left to one side, we’re at the end of the country, we are against everyone and everything.’ It’s a discourse used throughout the history of Gaucho football: it’s Gremio or Inter against everyone and everything… [Nobody] wants us to win, the other clubs are more popular, but we’re going to go [to Rio, Sao Paulo and Belo Horizonte, the economic centres] and take them on.” 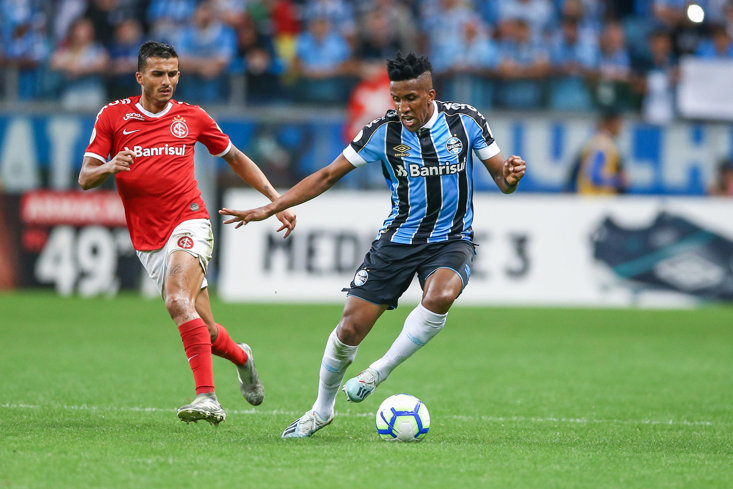 Whilst both clubs’ games against teams from other states are a matter of Gaucho pride, Grêmio and Inter have always represented different strands of Porto Alegre society.

The founder members of Gremio Foot-Ball Porto Alegrense, to give the club its full title, were mostly descended from German immigrants or were themselves German immigrants, of whom there were many in the region. Inter, meanwhile, were founded, as the name suggests, by a more diverse group.

Consequently, 'the Colorado' became known as Porto Alegre’s ‘club of the people’. That social contrast and the Gaucho people’s innate combativeness gave the meetings an immediate edge and over the 111-year history of the rivalry it has only become sharper.

There have been countless Rio Grande do Sul state championship finals disputed between the pair, the most famous coming in 1977 when Grêmio broke an 8-year Internacional stranglehold on the title.

They also met in February 1989 in the ‘GreNal of the Century’, a Brazilian championship semi-final that is generally considered the biggest of all GreNals. In 2004 and 2008, the teams faced each other in the Copa Sudamericana, South America’s secondary continental competition.

Yet Thursday’s match is the first meeting – the first of two, as the tournament still in the group stage – in the hugely prestigious Libertadores. As a result, it carries an extra significance. Grêmio fan Mateus Giaretta tells The Sportsman that, “It’s going to be a historic GreNal, the first in the Libertadores.

It’s a competition that is seen as important across Brazil, but in the south, there is something even more special. People really value this championship.”

Additionally, these two ties (the first at the Arena Gremio then at Inter’s Estadio Beira-Rio in early April) are a mouth-watering prospect from a purely footballing perspective. Under the management of Renato Gaucho, Gremio won the Libertadores in 2017 and got to two more semi-finals subsequent years, an incredible level of consistency in a notoriously unpredictable tournament.

They boast the quality of Brazil players Everton and Matheus Henrique and have recruited well for 2020. Inter are now under the watch of Eduardo Coudet – the promising Argentine manager who won the Superliga title with Racing Club in 2019 – and got off to a stunning start in the competition, destroying Chilean champions Universidad Catolica 3-0 in Porto Alegre with two goals from veteran striker Paolo Guerrero.

This promises to be one of the unmissable games in South American football in 2020. If nothing else, keep your eyes peeled for the fan videos on Friday morning. The atmosphere will be one to savour.