Snooker
News
Yan Bingtao got lost on the way to Alexandra Palace, then lost his way at the table
Hector Nunns
19:00, 09 Jan 2022

Defending Masters champion Yan Bingtao had a bad start to his Sunday, getting lost while being driven to the Alexandra Palace venue – and having arrived late he was then run off the road by a fired-up Mark Williams.

The 21-year-old from China was bizarrely making his debut at the huge arena in north London after winning the title 12 months ago behind closed doors in Milton Keynes.

Successes last year for Yan and then Zhao Xintong at the UK Championship last month led to suggestions a young Chinese wave of talent could even be sweeping most before them for the foreseeable future.

But the 46-year-old Williams, part of the famous ‘Class of 1992’ along with Ronnie O’Sullivan and John Higgins, and a two-time Masters champion with the last title coming 19 years ago, won 6-4 to show the old guard still have something to offer.

And there was something for everyone in a characteristically brilliant if unconventional display, that included some of his trademark ‘under-arm’ shots, and also an outrageous one-handed snooker escape that saw him fluke the pink to help spark the crucial four-frame blast from 3-1 adrift.

It was a wonderful display from reigning British Open champion Williams, one that saw him into the quarter-finals of the prestigious invitation tournament for only the elite top 16.

Earlier in the day world No15 Yan, in a car with his manager and tournament reserve Zhou Yuelong who was at the wheel, suffered Sat Nav trouble in the Bermuda Triangle that is the North Circular Road and arrived late.

Williams, who has suffered from both Covid and gout this season, is in his 30th season as a professional. The world No8 said: “It was just nice to be playing in front of a fantastic crowd in this wonderful arena – probably the best I have played in in my life, ahead of the old Conference Centre.

Live Snooker
@Livesnooker
The reigning champ falls at the first hurdle for the 3⃣rd time in 4⃣ years. ❌
But Yan will be back. 🐯💪
#CazooMasters 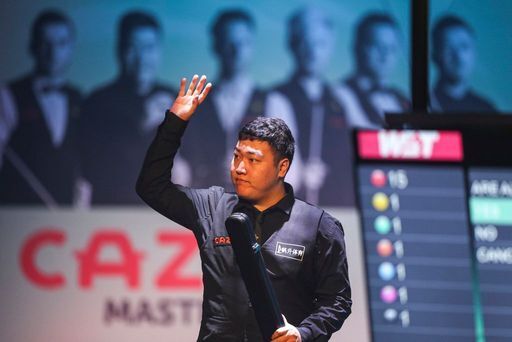 “We are still under the restrictions back home in Wales, and at my age just to get here and experience this is wonderful.

“It was a good game and I have been playing like that all season really. I am all right as long as I don’t have to walk up and down any stairs!

“My record since 2003 is not great but it is such a hard tournament to win when you look at who is in the field every year, the likes of Ronnie O’Sullivan and John Higgins.

“In a couple of months I will be 47 and I would never have though I would still be competing at these tournaments at this level – you just have to enjoy the occasions.

“I would just have liked another backstage pass for my wife Jo as well as my coach Lee Walker, it would have been good to see her at the interval – but they seem to be the rules.”

Yan said: “Zhou Yuelong was driving us here this morning and he did get lost, we found it a very hard place to find.

“We both played well today so I am not too disappointed. I enjoyed it out there though it was very different. It was my first time in this arena and there was definitely a lot more pressure playing in front of 2,000 fans than last year with no one at Milton Keynes.

“Mark was excellent, I can’t remember him missing a long pot or any of the tough shots, so he deserved his victory.”

Williams will play the winner of Monday’s clash between Higgins and Zhao, and was in no doubt who was his preferred opponent. He said: “I would love to play against John, me and him are the golden oldies and it would be fantastic to play here in this arena with the big crowd.”

Considering he is one of the undisputed greats of the sport, Williams’ record at the Masters in recent years and at the various venues since leaving the old Wembley Conference Centre has been less than spectacular.

His first title in the tournament came in the classic 1998 final against good friend Stephen Hendry, when the Scot missed a straightforward re-spotted black into the centre pocket, allowing Williams to pot it for the title.

And that was followed in 2003, when Hendry was once more his victim in the final though the scoreline of 10-4 was far more emphatic in what was probably the absolute pomp of Williams’ career.

But since 2003 in the last 19 years picking have been a lot slimmer for Williams, who has bafflingly only made the semi-finals once in almost two decades.

x
Suggested Searches:
Manchester United
Liverpool
Manchester City
Marcus Rashford
Premier League
More
snooker
15-Year-Old Schoolboy Wildcard Stan Moody Is A Shoot Out Sensation
Schoolboy Stan Moody claimed a sensational debut big-tournament victory at the quickfire Shoot Out on [ ... ]
snooker
Peter Devlin Raps On Stage Alongside Jessie J In Snooker Shoot...
Peter Devlin hopes he can perform on the Shootout stage as well as he did with singer Jessie J earlier [ ... ]
snooker
18.5m Viewers And Upside-Down Glasses: Dennis Taylor Ruled Snooker...
Snooker may never quite see another high-watermark like the 1985 World Championship final with its 18.5million [ ... ]
snooker
Neil Robertson: Other Tournaments Need To Match Incredible Ally...
Neil Robertson has urged the Crucible crowd to up their game as a spectacular Masters spectacle this [ ... ]
snooker
Neil Robertson Builds On Australian Ashes Success With Masters...
Neil Robertson piled Masters success on Ashes misery as the latest Australian to demolish England’s [ ... ]
snooker
Barry Hawkins Digs Deep To Book Masters Final Showdown With...
Barry Hawkins took his place in the Masters final after coming through yet another Alexandra Palace [ ... ]
snooker
Paul Hunter: The Great Man The Masters Trophy Is Appropriately...
Among many poignant moments at the 2022 Masters at Alexandra Palace, one perhaps stood out above all [ ... ]
snooker
Robertson Wins Masters Thriller To Reach Final But Celebration...
Neil Robertson produced an astonishing comeback to reach the Masters final by beating Mark Williams [ ... ]
snooker
World Number One Mark Selby To Seek Help Over Mental Health...
World No1 Mark Selby has revealed he will be seeking help over the current state of his mental health. [ ... ]
snooker
Neil Robertson Vows To Jump In Icy Alexandra Palace Lake If...
Neil Robertson has vowed to jump into the icy Alexandra Palace boating lake if he wins a second Masters [ ... ]
snooker
Judd Trump Insists Masters Atmosphere Is More Like Boxing Than...
Judd Trump laid out rival Kyren Wilson with a series of hammer blows on Friday – and then insisted [ ... ]
snooker
Masters 2022: Williams Edges Out Old Rival Higgins In An Alexandra...
Both Mark Williams and John Higgins testified to one of the most extraordinary atmospheres ever seen [ ... ]
snooker
Neil Robertson: Ashes and Michael Jordan Inspired Me Against...
Australia’s Neil Robertson took inspiration from both the Ashes and sporting legend Michael Jordan [ ... ]
snooker
Kyren Wilson Relishing Masters Clash With Rival Judd Trump
Kyren Wilson became the second man to scrape into the Masters quarter-finals on Wednesday – as [ ... ]
snooker
Judd Trump Edges Into Quarter-Finals But Mark Allen Still Smiling...
Mark Allen was still smiling on Wednesday night despite an agonising Masters final-frame defeat to Judd [ ... ]
snooker
Masters 2022: Snooker’s Class Of 1992 Still Thrilling Crowds...
All three of snooker’s famous Class of 1992 of Ronnie O’Sullivan, John Higgins and Mark [ ... ]
snooker
Ronnie O'Sullivan Wows Rolling Stones Pal Ronnie Wood With Masters...
Ronnie O’Sullivan wowed Rolling Stone Ronnie Wood as the Rocket got his bid for an eighth Masters [ ... ]
snooker
Shaun Murphy: Masters Defeat Is Just More Pain On Top Of Back...
It wasn’t just the pain of a disappointing Masters first-round defeat to Barry Hawkins that was [ ... ]
snooker
Ranking The Five Greatest Masters Finals - Featuring Williams,...
There were some near misses, and I have chosen to leave out the superb comeback victory for a 39-year-old [ ... ]
snooker
Masters 2022: History-Making Higgins Books His Place In The...
John Higgins made history when he walked out against reigning UK champion Zhao Xintong at the Masters [ ... ]
snooker
The Constant Uncertainty Surrounding Djokovic Could Impact His...
Detained and then isolated at Melbourne Airport on arrival from the Middle East, Novak Djokovic has [ ... ]
snooker
Steve Davis Looks Back At His Stunning Masters Win Over O’Sullivan...
Steve Davis still believes his last major tournament win owed plenty to a streaker breaking Ronnie O’Sullivan’s [ ... ]
snooker
Changing Of The Guard: China’s Hopes For Snooker Domination
When Ding Junhui burst onto the snooker scene in spectacular fashion in 2005, many expected the Chinese [ ... ]
snooker
Masters Preview: Can Chinese Whizkid Yan Bingtao Defend His...
Snooker’s big guns will be out in force for this year’s Masters (9-16 January) and for defending [ ... ]
snooker
Ken Doherty - 25 years On From His Greatest Triumph At The Crucible
Ken Doherty will head back to the Crucible Theatre later this year to celebrate the 25th anniversary [ ... ]
snooker
Snooker’s Original ‘Grinder’ Cliff Thorburn Ready To Call It...
Snooker’s original ‘Grinder’ Cliff Thorburn admits he is finally ready to pack away [ ... ]
snooker
Graeme Dott Believes Stephen Hendry Will Be ''Much Better''...
Former world champion Graeme Dott has backed Scottish snooker legend Stephen Hendry to do some serious [ ... ]
snooker
World Number One Mark Selby Won’t Rest While There’s Still History...
Mark Selby insists there is no chance he will ever rest on his snooker laurels while there are titles [ ... ]
snooker
750-1 Upsets, Breakout Stars & World Class Wins: Snooker's Best...
Snooker like all sports to a greater or lesser degree was hit by the Covid pandemic in 2021 – [ ... ]
snooker
Ronnie O’Sullivan – What Changing Of The Guard?
If there is indeed a changing of the guard taking place in snooker, then someone clearly forgot to tell [ ... ]