Could this be a watershed moment in Katarina Johnson-Thompson's career? The 25-year-old has always had the physical capabilities to be one of the very best in athletes in the world but there were question marks about her mental strength, until now. Johnson-Thompson won Great Britain's first gold medal of the World Indoor Championships with a composed, considered and mature performance in the pentathlon at Arena Birmingham and it was a display that hinted at even better things to come.

“It has been a long time coming but I am finally a senior world champion, so I am so happy," said Johnson-Thompson. "I just wanted my family to actually see me achieve something."

The 2015 European Indoor Championships winner was desperate to prove that she could produce the goods on the global stage after going the best part of two years without winning a major title. A personal best effort in the shot put, often considered her weakest of the five disciplines, in Birmingham was testament to the improvements she has made since moving to France to be coached by Bertrand Valcin in December 2016.

“The shot put went best for me. I’m so happy because my warm-up wasn’t good but I got an indoor PB which I was delighted with. It is an event I struggle with so to get a PB was amazing."

The personal-best effort in the shot put was part of consistent efforts in the first three events on Friday before she squeezed ahead into first place with a 6.50m effort in the long jump.

Johnson-Thompson knew she needed to keep in touch with Austria's Ivona Dadic in the final 800m event to be sure of gold and she produced something of a master class, staying patient before seeing off a surge from Dadic to win the race in style. A watershed moment.

KJT
@JohnsonThompson
Meant to be asleep but woke up still buzzing and very overwhelmed with everyone's kind messages! Can't thank you all enough, means so much. World indoor GOLD 😮🤗🥇 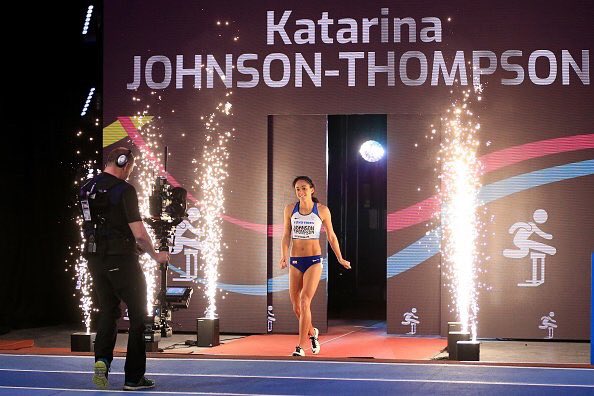 Earlier on Friday, Great Britain's Greg Rutherford may have been absent from the long jump but an enthralling contest was won by a coming force in the sport. Cuba's Juan Miguel Echevarria edged a high-class contest as the exuberant 19-year-old went head-to-head with the reigning champion, Luvo Manyonga of South Africa, before coming out on top.

The pair traded blows and Manyonga appeared to have edged ahead when he leapt a world-leading 8.44m. Echevarria responded in kind by going even better with an effort of 8.46m before Manyonga fouled when pushing too hard with his final pair of jumps.
Result: 1st - Juan Miguel Echevarria (CUB; 8.46m). 2nd - Luvo Manyonga (RSA; 8.44m). 3rd - Marquis Dendy (USA; 8.42m).