Boxing
News
Here is how six Great Britons got on in their first title defences
Joey Mills
06:55, 09 Sep 2021

Sunny Edwards was set to defend his IBF Flyweight championship against Jayson Mama on Saturday at the Copper Box Arena in London. An injury to the Croydon man means he must wait to make the maiden defence of the title he won in April.

When Edwards does return, he will follow in the footsteps of an illustrious roll call of British world champions. Domestic fighters have endured varying fortunes when defending their hard-won gold for the first time, here is how six Great Britons got on in their first title defences.

Turpin had won the Middleweight Championship Of The World from Robinson on points in the greatest upset ever staged in a British ring. Two months later, the new champion could not replicate the unbelievable performance that had crowned him on the Earl’s Court night.

Only 23 years old, Turpin had the weight of the world on his shoulders going into the rematch at the Polo Grounds in New York. He had suddenly found himself catapulted into international stardom. Turpin fought gamely and the scorecards were close, but Sugar Ray demonstrated why he would go on to be regarded as possibly the greatest boxer of all-time, as he pounded out a tenth-round TKO. 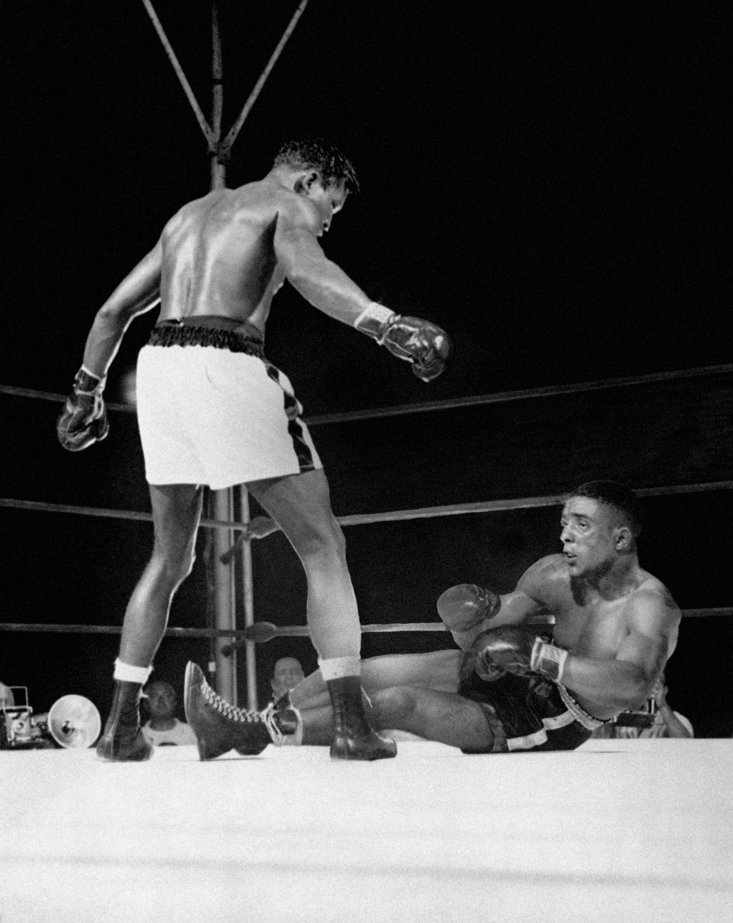 Three punches. Two knockdowns. One round. ‘Prince’ Naseem did not hang about in his first defence of the WBO Featherweight title. Hamed had ripped the title from Steve Robinson in eight one-sided rounds the year before, and made an incredible statement against Lawal.

Hamed knocked the Nigerian down with the first punch of the fight, a clever right hook. When the action resumed he needed only a snapping right followed by a crunching uppercut to end the night 35 seconds after it had begun.

‘The Dancing Destroyer’ had dethroned Michael Bentt by stoppage for the WBO Heavyweight title in his last outing, but had the misfortune of running into one of the era’s defining fighters.

‘Big Daddy’ was imperious in taking the title from the Norwich man, knocking him down seven times on the way to a knockout victory. Hide would rebound well, winning a second WBO title two years later. 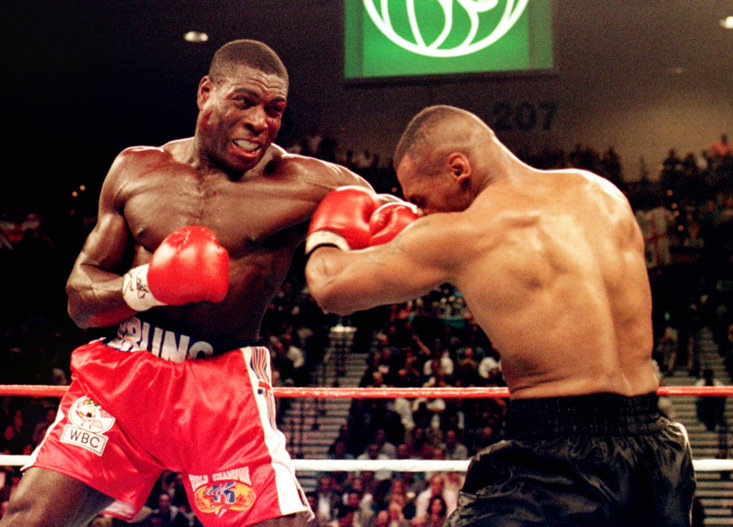 The beloved nearly man of British boxing, Bruno finally captured a world championship at the fourth attempt, decisioning Oliver McCall for the WBC portion of the crown in 1995.

He would defend it against a familiar foe when he rematched a post-prison ‘Iron’ Mike Tyson. Bruno had rocked Tyson in that 1989 collision before succumbing to the Catskills man’s power in the fifth. Mike would get the job done two rounds quicker on this occasion, and without meeting the same resistance, as a visibly distressed Bruno capitulated in Las Vegas. His title mission accomplished, Frank Bruno retired after the fight.

Hatton pulled off one of the great British title wins, battering the great Kostya Tszyu to an eleventh-round retirement to capture the IBF strap. ‘The Hitman’ would claim another title in his first defence when he met WBA boss Carlos Maussa.

Roared on by a packed Sheffield Arena, Hatton picked up where he left off with a swarming body attack on his taller foe, but incurred a first round cut that would bother him throughout. Battling through adversity, Ricky emphatically closed the show with a ninth-round left hook to unify the titles. 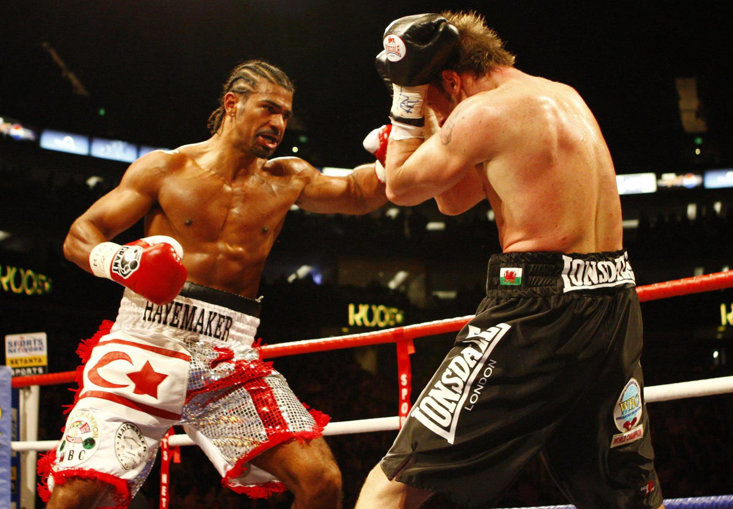 It is not common to see a genuine superfight take place in a champion’s first defence. That is exactly what happened when David Haye defended his newly-won WBC, WBA and The Ring Cruiserweight titles against WBO Champion Enzo Maccarinelli.

An all-British unification between two consummate knockout artists, this is as good as boxing match-making gets. The fight however, was over quickly. ‘Hayemaker’ lived up to his name and wiped out the Welshman to take home another piece of the cruiserweight crown.

x
Suggested Searches:
Manchester United
Liverpool
Manchester City
Marcus Rashford
Premier League
More
boxing
Oleksandr Usyk Puts In Boxing Clinic Against AJ To Take Heavyweight...
You’d be forgiven if you’re starting to grow a little weary of hearing ‘Sweet Caroline’ [ ... ]
boxing
Okolie Cruises To Victory In First World Title Defence On AJ...
The first defence of Lawrence Okolie’s WBO cruiserweight crown ended swiftly on the undercard [ ... ]
boxing
The Rebuild Begins For Callum Smith As He Steps Up To Light...
Callum Smith was the best super middleweight in the world. The Liverpool fighter was the latest outstanding [ ... ]
boxing
Anthony Joshua Weighs In 19lbs Heavier Than Usyk Ahead Of Heavyweight...
Anthony Joshua has weighed in at 240lbs ahead of his heavyweight showdown with Oleksandr Usyk this weekend, [ ... ]
boxing
Okolie Is The Latest In A Proud Line Of British Cruiserweight...
Anthony Joshua will not be the only British world champion stepping into the ring at the Tottenham Hotspur [ ... ]
boxing
Anthony Joshua vs Oleksandr Usyk Is Fight Of The Year, Says...
Ahead of Oleksandr Usyk’s heavyweight showdown with Anthony Joshua at the Tottenham Hotspur Stadium, [ ... ]
boxing
From Mike Tyson To Mr. Dream, How Punch-Out!! Defined Boxing...
Only 55 men truly know what it is like to face ‘Iron’ Mike Tyson. But a generation of gamers [ ... ]
boxing
Anthony Joshua Treating Oleksandr Usyk Fight Like Just Another...
Anyone expecting fireworks akin to Canelo and Caleb Plant’s presser might have been left disappointed [ ... ]
boxing
Six Of The Best: Famous Boxing Father And Son Duos
Campbell Hatton faces Sonni Martinez this weekend in his fourth professional fight. While the Manchester [ ... ]
boxing
A Usyk Win Could Derail AJ-Fury, But Bring Us An Undisputed...
When the dust settles and Anthony Joshua vs Oleksandr Usyk is in the record books, fans and media alike [ ... ]
boxing
Eubank And Watson Made History That Should Never Be Repeated
Every boxing match is a roll of the dice. Fans demand ferocity and violence. They roll the dice and [ ... ]
boxing
Next Best Thing: Why Usyk Is The Best Opponent AJ Could Have...
Anthony Joshua steps into the ring with Oleksandr Usyk on Saturday, defending his WBA, WBO and IBF world [ ... ]
boxing
Start Time? Undercard? How To Watch? Everything You Need to...
Anthony Joshua’s IBF, WBA and WBO belts will all be on the line this weekend when he takes on [ ... ]
boxing
Dillian Whyte To Fight Otto Wallin, Five Boxing Stories You...
Dillian Whyte could face a tough heavyweight test in October, Jake Paul is helping to make a women’s [ ... ]
boxing
Bridge Over The River Why?: WBC Confirms First Bridgerweight...
Boxing has a new world championship in a brand new weight class, as Oscar Rivas and Bryant Jennings [ ... ]
boxing
Crawford vs Porter: Top Welter Scrap Can Cure Boxing Of Its...
WBO welterweight champion Terence Crawford will meet former two-time belt-holder Shawn Porter on 20th [ ... ]
boxing
Tales From The Crypto: Amir Khan Fronts Bizarre Finance Influencer...
You have seen your favourite YouTubers knock out basketball players. You have seen MMA fighters destroy [ ... ]
boxing
Atrocity Exhibition: Boxing Must Stop Encouraging Fighters Like...
Evander Holyfield is no stranger to unedifying ends to a career. ‘The Real Deal’ has reached [ ... ]
boxing
Tyson Fury Shares Career Bucket List, Five Boxing Stories You...
Tyson Fury has mapped out his ideal boxing bucket list, Donald Trump is back and Billy Joe Saunders [ ... ]
boxing
Anthony Joshua's Ferocious Punching Power The Key Against Usyk,...
There’s a little over a fortnight to go until the showdown between WBA, IBF, WBO, and IBO heavyweight [ ... ]
boxing
When They Were Kings: Triller’s Old Guard Have Seen Better Days
Propped up by a mixture of celebrities, retired fighters, influencers and the odd rising boxer, Triller [ ... ]
boxing
When Wladimir Klitschko And ‘The Next Tyson’ Saved The Heavyweight...
Former WBC heavyweight champion ‘The Nigerian Nightmare’ Samuel Peter turns 41 today. Despite [ ... ]
boxing
Oscar Valdez Fighting After Positive Drugs Test Casts Boxing...
WBC super featherweight champion Oscar Valdez has tested positive for the banned substance phentermine [ ... ]
boxing
Lara Slice Puts Warrington Redemption On Ice
Josh Warrington stormed into Headingley to the strains of ‘I Predict A Riot’, but not even [ ... ]
boxing
Triumphant Taylor And Heroic Hughes Highlight Warrington vs...
There is no question that Josh Warrington drew the large and vocal crowd to Headingley, to watch him [ ... ]
boxing
Influencers Need Not Apply: Fury, Joshua and Canelo Lead Boxing’s...
Last weekend, Jake Paul “treated” us to the latest chapter in his boxing odyssey. Next Saturday, [ ... ]
boxing
Josh Warrington Admits Pressure Is On As He Seeks Revenge Against...
Josh Warrington is gearing up for a shot at revenge on Saturday night when he takes on Mauricio Lara [ ... ]
boxing
Undisputed vs Undisputed: A Future Fight Between Serrano And...
Among the YouTubers and gross mismatches on show in Cleveland, Ohio on the Jake Paul vs Tyron Woodley [ ... ]
boxing
A Night At The Circus: Paul Squeaks Past Woodley As Tommy Fury...
Jake Paul moved to 4-0 (3 KOs) last night with a split decision victory over former UFC champion Tyron [ ... ]
boxing
Angelo Dundee: Three Masterpieces From Boxing’s Greatest Trainer
Perhaps the greatest cornerman of all-time, Angelo Dundee guided the careers of sixteen world champions [ ... ]