Boxing
News
As 'The Gypsy King' prepares to face Derek Chisora, The Sportsman looks back at his biggest nights
Joey Mills
10:00, 03 Dec 2022

Look alive you big dossers, 'The Gypsy King' is back. Tyson Fury defends his WBC championship against Derek Chisora this weekend at Tottenham Hotspur Stadium. The Morecambe-based big man looks to keep his unbeaten record intact in his 34th professional outing against the often-unpredictable 'Del Boy'.

To whet your appetite for the champion's return, The Sportsman looks back at his biggest nights

Fury’s first fight in the USA saw him take on former world cruiserweight champion Steve Cunningham. Viewed as Tyson’s coming out party to international viewers, he certainly made a splash. Despite ‘U.S.S’ not being a particularly big puncher, even during his cruiserweight days, he was able to drop Fury in the second round of the frenetic fight.

The Mancunian battled back, knocking out his experienced foe in the seventh round. After the final bell, Fury serenaded the New York crowd with his take on “Keep It Between The Lines” by Ricky Van Shelton. A transatlantic love affair between fighter and fans was born.

Fury had decisioned Del Boy three years before in a competitive British and Commonwealth championship collision. Chisora had spent the intervening years competing at world level, including an impressive but ultimately unsuccessful challenge for Vitali Klitschko’s WBC championship.

When the fighters met again for the European and British belts, it was Fury that appeared to have progressed into a genuinely world class operator. Where the first fight had been a war of attrition, with both men enjoying moments in the ascendancy, this was a drubbing. Fury beat his opponent into submission, with Chisora retiring after ten completed rounds.

The night the playfully charismatic boy became a man. Fury’s utter refusal to back down to the intimidation tactics both Klitschko brothers had used to see off a decade of opponents was inspired. The Brit made Wladimir re-wrap his hands, after the initial gloving had been done without Fury’s camp present. He demanded the ring canvas be changed when the surface was softer than agreed. Every little advantage the Klitschko brothers had grown accustomed to taking was ripped from their grasp.

Wladimir’s world title belts would follow, as Fury out-foxed him over twelve cagey rounds to take the IBF, WBA and WBO heavyweight championships. Before this fight, Tyson Fury was seen as a braggart who talked a better fight than he boxed. After this bout, he would go down as one of the defining heavyweight fighters of a generation. 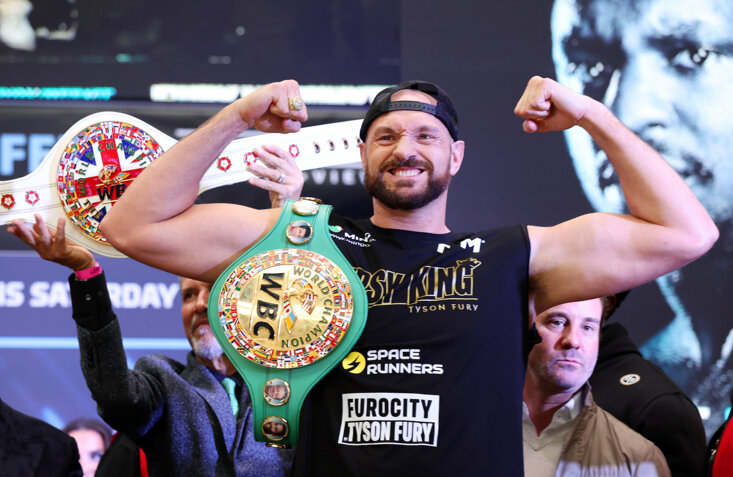 Perhaps not an obvious choice, but a fight that demonstrates the will, determination and toughness of Tyson Fury more than any other. Fury had been out of the ring for over two-and-a-half years, had been stripped of the remaining world title belts he had not relinquished. Fury had fought depression, and was open to a number of publications about his depression and suicidal ideation. The world had heeded his call, and the struggles of a world class sportsman being so openly dissected helped create real change around mental health advocacy.

On a summer night at the Manchester Arena, Fury won two battles. The first was a fourth-round stoppage victory over the Albanian fringe contender. But in returning to the ring after his almost-fatal struggles, Fury won a more important battle. The comebacking heavyweight won a battle against his own demons.

Yes, this might be a cop-out. But it is almost impossible to separate three bouts that comprise one of the greatest heavyweight trilogies of all-time. Crowning a favourite depends on what you like.

Their first scrap was a disputed split draw in which Fury rose from a crushing knockdown in the final round to inconceivably finish the fight on his feet. The second was a textbook boxing lesson, in which Fury emptied his full repertoire to stop Wilder in the seventh, capturing the WBC championship in the process.

The third bout is perhaps the greatest of the three. A right uppercut had ‘The Bronze Bomber’ down in the third round. Wilder responded by knocking Fury down twice in the following session. The tenth round saw Wilder hit the deck again, and after an incredibly brave display he was knocked out in the eleventh. It was the sort of fight that makes the fighters involved immortal, captured in time and paired as rivals in the mind’s eye forevermore. The 1970s had Ali-Frazier, the 1990s had Bowe-Holyfield and now the modern era has Fury-Wilder.