April will see the elite of English Track and Field descent descend upon Australia for the XXI Commonwealth Games. The Carrara Stadium in the Gold Coast will be the centrepiece for the Athletics competition with Team England hoping to continue their rich history of success. No other country has won more medals in athletics at the multi-sport event than England.

This year's athletes will be hoping to live up to their high expectations and make up for their past misfortunes. With gold on the line, here are five contenders targeting Commonwealth success.

Everything appears to be coming into place for Anguilla-born Hughes. The 22-year-old has already posted good results this year on both sides of the world. Last month he stunned two-time Olympic gold medallist Yohan Blake to win the 100 meters at the Gibson McCook Relays in Jamaica. Achieving the fastest time of the year so far at 10.01 seconds.

Despite his blistering time, Hughes will focus on the 200 meters and relays in the Gold Coast. At a recent athletics meeting in Queensland, which was hampered by windy weather conditions, he ran the 200 meters in a time of 20.23 seconds. Recording the fastest time for the discipline on Australian soil since 2001 and the joint-seventh fastest of 2018.

Since switching allegiance to Great Britain in 2015, Hughes is yet to win a medal at an international competition. Last year he reached the semifinals of the world championships in London before finishing seventh in his heat. Given his recent surge in form, Hughes’ medal drought has a solid chance of ending.

Coached by former middle distance great Steve Cram, Laura Weightman is embarking upon a new challenge. Already a commonwealth games silver medallist in the 1500 meters from 2014, the Alnwick-born athlete is set to make her major competition debut in the 5000 meters.

Regardless of her lack of experience in running the longer distance at international level, she has already illustrated promising signs this season. At the start of the month, Weightman won a 5K road race in Podium, Barrowford, in a time of 15:25. The fourth fastest ever by a British female athlete.

“I’m really excited about heading to Australia and doing the 5000m which is something different for me. It’s a change from the 1500m and I’m looking forward to it.” The 26-year-old told Athletics weekly.

In the history of the commonwealth games, only one English woman has won the 5000m title. Paula Radcliffe claimed gold in 2002.

Fresh off winning gold at the World Indoor Championships, Andrew Pozzi is hoping to prove a point outside in the 110 metre hurdles. The 26-year-old is yet to win a major title outdoors. Reaching the semi-final stage at both the 2016 Olympic Games and 2017 World Championships. 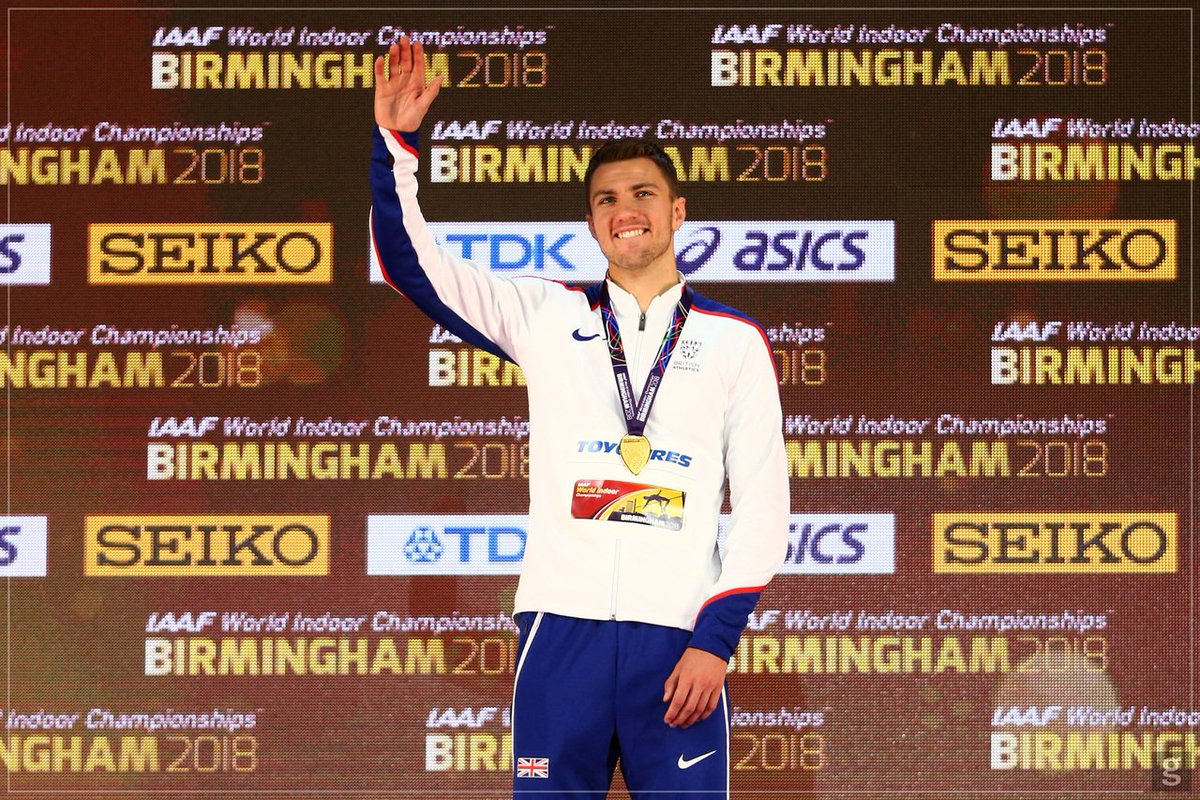 "I want to start delivering at all indoors and outdoors championships. It's taken me a long time to catch up but with two summers under my belt I'm going to take that form into every championship expecting to win a medal and deliver." Pozzi said during an interview with Sky Sports.

In his first outdoor race of the year in Brisbane, the 26-year-old finished fourth in a modest time of 13.99 seconds. 0.86 seconds behind his personal best set last April.  Since 2002, all four gold medallists in the 110M hurdles at the Commonwealth Games have run a time of 13.40 seconds or quicker.

Less than a year after his heartbreaking disqualification for the World Championships, Tom Bosworth is eager for redemption. The 28-year-old has been praised for his efforts in trying to raise the profile of race walking. He is the British 20K record holder with a best of 80:13. Nearly two minutes faster than any other athletes from Britain.

Heading into the Gold Coast, Bosworth has illustrated his class this season. At an indoor race in Glasgow, he broke the world 3000 meter walk record with a time of 10:30:28. More recently, he also finished second in a 20K race in Lugano, Switzerland in a time of 81:28.

A British athlete is yet to win a medal in the 20K race walk at the Commonwealth Games. A trend that six-time British record holder Bosworth aims to break by winning his first medal of any kind at international level.

The darling of British athletics will be bidding to emulate Kelly Sothernton and Jessica Ennis by claiming Commonwealth honours. Katarina Johnson-Thompson enters the Heptathlon with a lot on expectation on her shoulders.

At the recent world indoor championships, she won three out of five events to claim a gold medal in the pentathlon. Finishing 50 points ahead of her nearest rival. It was Johnson-Thompson’s first senior global title at the age of 25.

This year the Liverpool-based athlete is gunning for the hat-trick. Already with one gold medal, she will bidding for a further two this year at the Gold Coast following by the European Championships in the summer.

“I said to myself I wanted two golds and one other medal but I would love three golds. If I can that would be great.” She said at the start of this month.

“That is what I am hoping. I am so happy. I have a busy year and this gives me confidence and belief going to the Commonwealth Games that I can compete at a certain level and come away with a medal and not screw it up.”

Johnson-Thompson is the third highest-scoring British Heptathlete of all time with a personal best of 6691 points.

More
athletics
Get The Most From Your Training With These Five Incredible Running...
There’s no question that thanks to a technological boom, the running experience has never been [ ... ]
athletics
Visa Sponsorship Renewal Gives Olympics Welcome Boost In Uncertain...
Visa have extended their sponsorship of Olympic athletes until 2021, after this summer’s games [ ... ]
athletics
How Marathon Runners Can Stay Focused And Feeling Good During...
There are many of us who should have been making our final preparations for a marathon right now. With [ ... ]
athletics
Team GB's Tom Bosworth May Not Travel To Olympics Over Coronavirus...
Team GB’s top racewalker Tom Bosworth may not travel to the Olympic Games this summer, if we do [ ... ]
athletics
Gender Balance Is A Reality At Tokyo 2020 Thanks To Flag-Bearer...
The Olympics Opening Ceremony is one of the most iconic events on the planet. Every country’s [ ... ]
athletics
Five Tokyo 2020 Stars Who Will Be Surfing, Skating And Climbing...
157 days. That is all that is left between today and the opening ceremony at the Tokyo Olympics, the [ ... ]
athletics
Dina Asher-Smith Will Welcome Fraser-Pryce's Decision To Do...
The stage is set. The gauntlet has been laid down. In Tokyo, Team GB’s Dina Asher-Smith will be [ ... ]
athletics
Book Review: The Runner By Markus Torgeby
As the publishing industry is the envy of the Premier League, in that it takes a midwinter break and [ ... ]
athletics
The Exo-Skeleton Suit That's Helping Smash Limitations And Break...
With all the criticism surrounding VAR in football at the moment, it is important to take a moment to [ ... ]
athletics
The Running Trainers So Good They Could Be Banned By World Athletics
Ever heard of the running trainer that made athletes too quick? Nike’s record-breaking running [ ... ]
athletics
Taking The Knee & Hand Gestures Banned From ''Politically Neutral''...
More than half a century after Tommie Smith and John Carlos created one of the most prevailing, [ ... ]
athletics
Alistair Brownlee Sets His Sights On A Tokyo 2020 Triathlon...
The lure of Tokyo 2020 is just too much for Alistair Brownlee, who has said he aims to compete at this [ ... ]
athletics
With Lessons In Hygiene And Hydration, Team GB Targets Medal...
UK Sport are hopeful that the 2020 Olympics in Tokyo will be the most successful of all time for Team [ ... ]
athletics
Paris Olympics 2024: Surf’s Up...10,000 Miles Down The Road,...
Excited for Tokyo 2020 yet? Well before we dive headfirst into athletics action in Japan there’s [ ... ]
athletics
Coaching US Runner Jordan Hasay Is The Next Chapter For Paula...
Paula Radcliffe is remembered for many things, being a world record holder, crouching to relieve [ ... ]
athletics
Nick Butter Becomes First Person To Run 196 Marathons In 196...
The Sportsman’s favourite marathon man Nick Butter has completed his incredible target of running [ ... ]
athletics
Groundbreaking Gene Testing Could Spell The End Of Doping In...
Doping has long been the scourge of sport. Some of the most high-profile names have been found [ ... ]
athletics
Top Athletes Left In Shock As 200m Is Cut From Diamond League...
The Diamond League has announced that the 200m will be one of four events cut from its core events in [ ... ]
athletics
Hand Washing And The Marginal Gains Helping Team GB Succeed...
Hygiene will be a key component as Team GB look for marginal gains at Tokyo 2020. It may sound a little [ ... ]
athletics
Nothing Left To Chance As Eliud Kipchoge Attempts First Two-Hour...
This weekend, the fastest marathon runner ever will attempt to record an athletic achievement that will [ ... ]
athletics
Five Things We Learned From The World Athletics Championships
The controversy-stricken World Athletics Championships came to a close on Sunday evening with Great [ ... ]
athletics
Katarina Johnson-Thompson's Journey from Imposter Syndrome To...
Prior to this year, the World Athletics Championships has consisted of tears, despair and heartbreak [ ... ]
athletics
Smooth And Efficient Noah Lyles CAN Beat Bolt's 200m World Record
“The man ran incredible times... I'm going to break that, and then I'm going to get even [ ... ]
athletics
Empty Seats Take Shine Off Dina Asher-Smith’s 100m Silver Medal
As Dina Asher-Smith took to the starting blocks for the women’s 100m final, silence descended [ ... ]
athletics
Luvo Manyonga Made The Long Jump From Crystal Meth Addict To...
Amongst all of the elite athletes gathering at the World Championships in Doha, not many have a story [ ... ]
athletics
On This Day in 1936: Jesse Owens Wins 100m Gold In Front Of...
Since assuming the role of Chancellor of Germany in 1933, Adolf Hitler had earmarked the 1936 Summer [ ... ]
athletics
One Year To Tokyo 2020: Five New Sports Set To Make An Appearance...
We’re just one year away from the opening ceremony of the 2020 Olympic Games in Tokyo and with [ ... ]
athletics
Justin Gallegos Creates History After Becoming The First Ever...
A runner known as Justin “Magic” Gallegos has made history after he was unveiled as the [ ... ]
athletics
Woman Drives Car Through Plymouth Half Marathon
The scene was set, a glorious Sunday on the Devon coastline, Plymouth bathed in sunshine as thousands [ ... ]
athletics
Nick Miller Creates Commonwealth Games History As Tom Bosworth...
The opening day of the Athletics competition at the Commonwealth Games saw a duo of English athletes [ ... ]
This website uses cookies
Cookies help us and our partners provide statistics. By browsing this website, you consent to the use of cookies in accordance with our Privacy Policy and Cookies Policy.
Accept & Close