Football
News
The England manager is coming under pressure, but he has learnt a few things
Simon Lillicrap
10:00, 15 Jun 2022

The morning after the night before and it still feels like some sort of fever dream. Did England fans really berate the manager that took them to the European Championship final eleven months ago? Did the Three Lions really suffer their worst home defeat since 1928? Unfortunately, the answer to both questions is yes, as Gareth Southgate saw his side once again struggle in this Nations League campaign.

But this extended international break has given some certainty for Gareth Southgate, as he alluded to in his post-match interview, and he has tried out fringe options. He didn’t play his strongest team, and so brutal lessons were dished out. Here’s five things we learnt from the four matches.

Southgate under the cosh

One year since England reached their first major final in 55 years, Gareth Southgate was berated by supporters at Molineux. Chants of ‘you don’t know what you’re doing’ rang down from the stands late on as the hostility levels around this England team reached new heights. Football fans are fickle, and the level of abuse the manager received last night was unacceptable given what he has done for this country.

This felt like a game in the Steve McClaren era. Two games to go until the World Cup, England need a break. Southgate hasn’t experienced anything like this before, and how he responds could be crucial for England’s World Cup hopes. He needs to get the fans back onside.

The West Ham man deserved his call-up after a successful season and got a huge amount of gametime under Southgate, starting twice and playing in all four matches. However, with England’s lack of spark in the final third, which Bowen was partly responsible for and his hopes of appearing in the World Cup are almost over. He showed glimpses, but with the quality England have in those positions, glimpses aren’t enough. 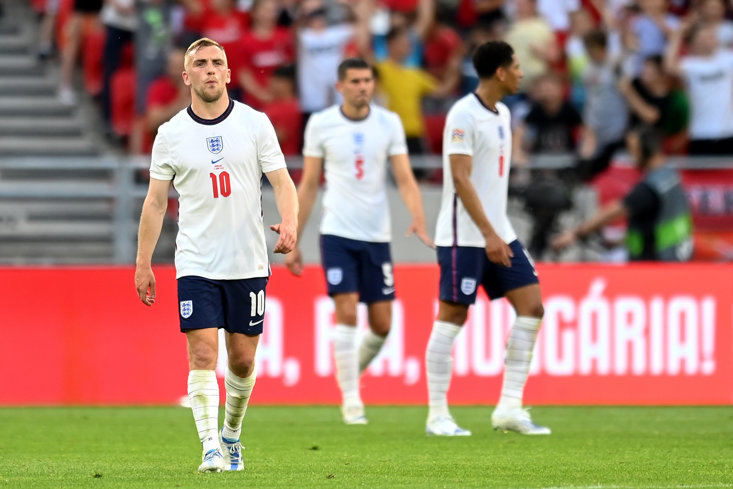 Bowen may have played himself out of contention

Despite his heroics for the Three Lions over the past two tournaments there was still a belief from some that Aaron Ramsdale should start ahead of the Everton man. In his two appearances, in particular tonight’s defeat to Hungary, he should have done better with the goals. Pickford will be starting at the World Cup now, and there can be no debate about it.

Back five or four - left-footers needed.

England tried both a back five and a back four with no level of success in these four games, but the flexibility is still there. It feels as if, like in the Euros, the back five will be used against stronger teams, with a back four saved for weaker opposition. However, England’s main issue came with the lack of left-backs in the squad. Luke Shaw and Ben Chilwell’s injuries meant that Kieran Trippier or Reece James were forced to play there, out of position. It slowed things down, and England looked sluggish on the ball. Hopefully by September, one of those two will be back in form.

This was the international break when Trent Alexander-Arnold needed to assert himself as a viable candidate for that right-back spot. Nobody performed well in that defence, but Alexander-Arnold played just 62 minutes in the 1-0 defeat against Hungary in Budapest, at right wing-back. It wasn’t a good performance, and from this showing it seems he will be missing out on a place on the plane. This match-up simply isn’t going to work out - not this year anyway.