50-0 boxing icon Floyd ‘Money’ Mayweather is set to return to the ring once again in 2022. Who could he face? Perhaps a welterweight mega-showdown with Terence Crawford or Errol Spence Jr? Another go-round with Manny Pacquiao before the Filipino legend rides off into the sunset? Perhaps even a long-rumoured meeting with Amir Khan, should the Boltonian defeat Kell Brook? Or maybe, just maybe a blockbuster superfight with Dubai YouTuber Money Kicks? You don’t have to be an expert on boxing, or Mayweather’s proclivities, to know which of the above options he’s hinted at taking.

Weighing in at 3.2 million YouTube subscribers, with a record of 88,678 Instagram likes on a picture of a tank top-wearing monkey in a golf cart, Rashed ‘Money Kicks’ Belhasa is expected to face Mayweather in an exhibition bout. Belhasa is no stranger to the squared circle, having won two amateur fights. Ample preparation, I’m sure you’ll agree, for a clash with a 50-0 five-weight world champion.

Of course his ring skills, if one can term them that, are not the reason Money Kicks is on the verge of a big-money showdown with a man also called ‘Money’. The reason, unsurprisingly, is money. Kicks is reportedly ‘the richest kid in Dubai’, and a showdown with semi-retired superstar Floyd Mayweather would be a financial juggernaut for all involved. It is the same logic that saw the former ‘Pretty Boy’ fly over to Japan and pound the tar out of under-sized kickboxing champion Tenshin Nasukawa in 2018. The same financial game plan that brought us his eight round amble round the ring against Logan Paul. The seeds for Mayweather vs Money Kicks were actually planted in 2017.

Mayweather’s final official boxing match took place that year, when he laced up the gloves to put on a show with UFC franchise Conor McGregor. That ten-round move-around did monster pay-per-view business, and drew more casual fan interest than any genuinely competitive boxing match-up that year. It was at that point that Mayweather seemed to grasp he did not need to meet a fellow boxer for people to pay to see him. ‘Money’ alone was the attraction. 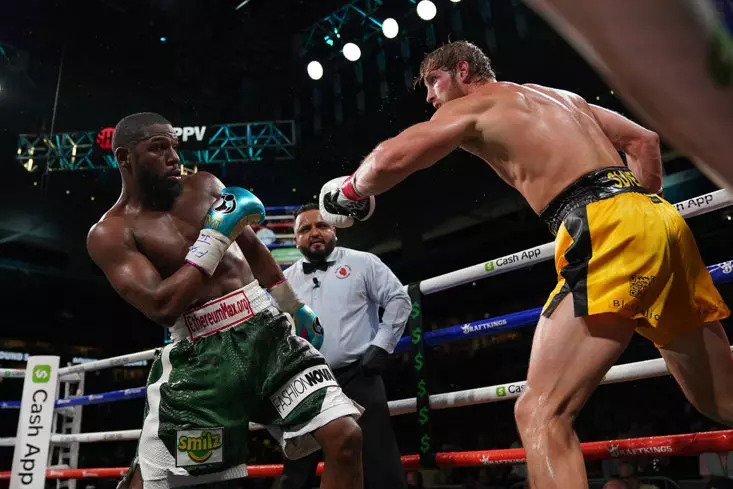 Floyd tested the theory against Nasukawa in their exhibition fight, proving he did not even need to take part in an officially sanctioned bout to sell tickets and PPVs. The strategy evolved further against Paul, demonstrating that the “opponent” need not even be a trained fighter. Mayweather can lease out his skills for millions at a time, knowing the exhibition fights will not appear on his unblemished record.

It is these discoveries that have enabled the potential involvement with Money Kicks. The influencer is clearly good at what he does. He has 14 million views on a video demonstrating his new Ferrari, another 11 million on a clip of him hanging out with DJ Khaled. They are the sort of wealthy flexes that Mayweather himself helped make popular. Belhasa also appears to fancy himself in the combat game. His ‘Got Punched By Francis Ngannou’ clip, and the banner video of himself being repeatedly hit in the stomach by a female yoga influencer, should stand him in good stead. Because he is more than likely going to get punched a decent amount by the best pound-for-pound fighter of the 21st century.

You don’t accumulate a reported $450 million net worth without being smart. Floyd’s formula for financial success has seen him continue earning both cash and headlines in the seven years since he last fought a world-ranked boxer. The Money Kicks bout is really no different to the oligarchs who hire The Rolling Stones or Celine Dion to play at their birthday parties. Money Kicks has financial pull and no shortage of fame, and he wants to fight Floyd Mayweather. Whether anyone wants to watch it or not, it makes financial sense for those involved and allows a rich kid to live his dream. As a fight it will be completely worthless, as an event it will be garish. As a YouTube video though, it might even top DJ Khaled for views.