Chelsea turned in an excellent team performance to end a run of four Premier League games without a win as they defeated rivals Tottenham Hotspur 2–0 at Stamford Bridge, as Hakim Ziyech scored a wondergoal to break the deadlock before Thiago Silva nodded in the second.

There were questions about the Blues’ performances in recent weeks, particularly since their defeat at the hands of West Ham United, but since the international break in November, no side in the Premier League has played as many games as them, with Spurs having played four less. So it was inevitable that fatigue was going to creep in Thomas Tuchel’s depleted squad, but they still managed to produce an energetic and quality-filled performance against one of their London rivals.

They were convincing from start to finish but it may have been helped by Antonio Conte opting to play a back four in England’s top-flight since September 2016 when he was in the Stamford Bridge hot seat. Chelsea were beaten 3-0 by Arsenal that day and he had never looked back at that system, until today, which was surprising. Tuchel’s attackers were constantly getting the better of Spurs’ full-backs and it was clear that Conte wasn’t going to get a resolute defensive performance with that particular structure.

A game where there were two complete opposite defences, Spurs struggled to comprehend with the barrage of Chelsea attacks and then the Blues were able to deal with whatever their London rivals threw at them with ease. Once again the stalwart Thiago Silva was commanding, and so too was Antonio Rudiger - who this season has been the best central defender in the division. Credit must also go to Malang Sarr, who did a commendable job at left-back and it just highlights how much of an impact Tuchel’s coaching has on the squad’s defenders.

Chelsea had a chance inside the opening minute as Mason Mount put a dangerous cross into the box but Romelu Lukaku could not convert with his weaker right foot. Callum Hudson-Odoi had a chance to punish some shaky Spurs defending in the opening stages, but his header at the far post didn’t threaten Hugo Lloris. The French goalkeeper was then forced to thwart an effort from Ziyech before Harry Winks called Kepa Arizabalaga into action as Spurs finally were able to get out of their own half. After Pierre-Emile Hojbjerg was caught out, Mount was able to burst down the right and after a neat one-two, he put in an inviting cross into the box but Lukaku didn’t adjust in time and the chance was spurned.

Sky Sports Premier League
@SkySportsPL
Hakim Ziyech, take a bow! 🔥
The Chelsea man cuts in on his left foot and guides his shot past a rooted Hugo Lloris to give the hosts the lead! 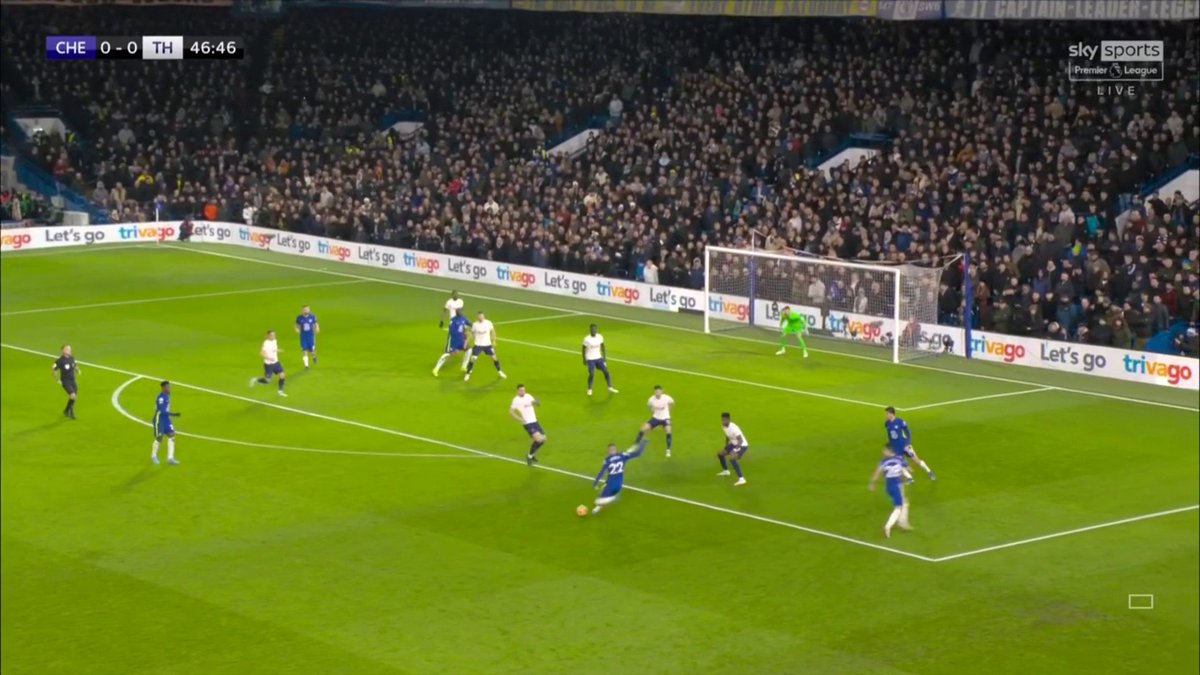 To add to another day of VAR mistakes, Harry Kane had the ball in the back of the net to seemingly put Spurs ahead but Paul Tierney gave a foul against the striker for a push on Silva, who threw himself to the floor theatrically. As VAR was having a bad day with judgement calls, it wasn’t surprising they didn’t overrule the decision, as Silva used all his experience to get Chelsea out of trouble.

The deadlock was quickly broken after the restart and it was well worth the wait. Ziyech picked the ball up on the edge of the box after some excellent play by Hudson-Odoi and he curled an amazing effort into the far corner as Lloris was left helpless. The Moroccan nearly doubled his tally swiftly after the opener with a rifled shot from range which stung the palms of the Spurs goalkeeper.

Thomas Tuchel’s side quickly found a second as Silva headed home from close-range after meeting a Mount delivery and that gave Conte’s players a mountain to climb for the remainder of the game. Chelsea continued to push for more goals and Lukaku was eager to grab one but when he had a golden chance to get in on the action, Lloris was on hand to deny him.

His counterpart, Arrizabalaga didn’t have much to do all afternoon but when he was called into action he stepped up. The Spaniard was able to parry away a powerful header from Kane which looked destined for the top corner but Spurs came up short at Stamford Bridge once again.

Chelsea are back on track and look secure in third position, while this unpredictable Tottenham side failed to deliver on the big stage.