Swansea’s hopes of achieving automatic promotion to the Premier League took another massive dent as they lost their fourth straight game in a row during a run in which they have failed to score a single goal.

The Swans hosted Preston on Easter Monday and went down 1-0 after former Swansea winger Scott Sinclair’s shot deflected in off Matt Grimes in injury time leaving the Welsh club 10 points off second-placed Watford who were held 1-1 at Middlesbrough.

Barnsley are fifth after Daryl Dike scored a double to beat Luton 2-1. Bournemouth, meanwhile, remain a point off the play-offs after winning 2-0 at Blackburn courtesy of goals from Philip Billing and Arnaut Danjuma Groeneveld. Reading in sixth, beat Wayne Rooney’s Derby 3-1 leaving the Rams eight points clear of the drop zone. 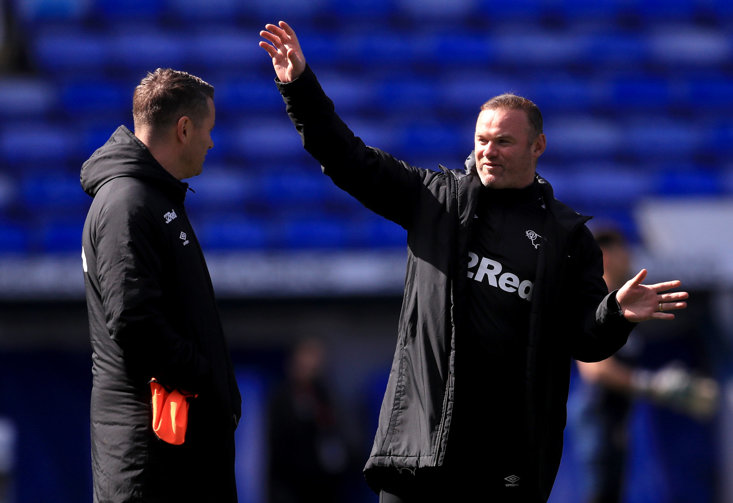 In League One, Hull City moved three points clear at the top of the table with a 3-0 win over Northampton as second-placed Peterborough were held at home by third-placed Sunderland.

The Tigers earned their victory thanks to goals from Callum Elder, Keane Lewis-Potter and Gavin Whyte, while at London Road, Aiden McGeady netted in the 81st minute to cancel out Siriki Dembele’s goal for the hosts.

Portsmouth beat struggling Wigan 1-0 and Blackpool hammered Gillingham 4-1 to solidfy their places in the play-off spots.

Down the other end, bottom club Rochdale held Ipswich to a goalless draw. Joey Barton’s Bristol Rovers defeated Doncaster Rovers 2-1 and, though they remain in the relegation zone, they are now on the same points as Swindon, who are 20th after losing 2-1 at Jimmy Floyd Hasslebaink’s Burton. Fleetwood beat AFC Wimbledon 1-0.

Crewe won 2-0 at MK Dons, Plymouth lost 3-0 at Shrewsbury and Accrington Stanley beat Oxford 2-1 to jump above the U’s in midtable. 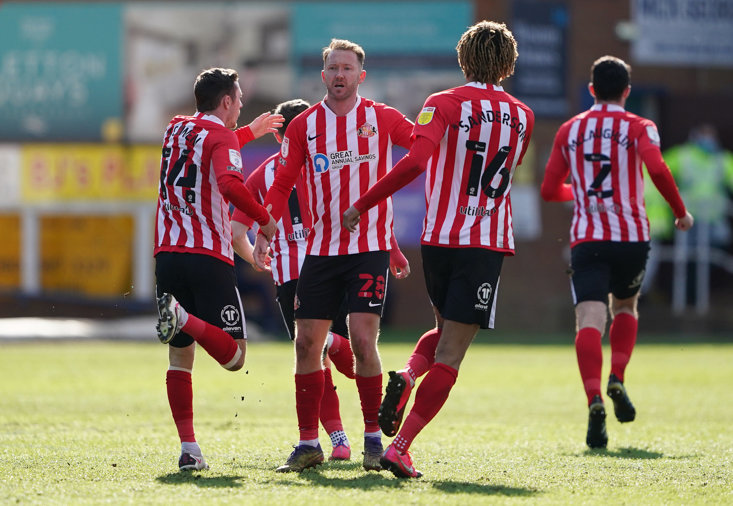 Bolton slipped out of the League Two automatic promotion places with a 1-0 defeat away at Newport County. Ian Evatt’s side failed to find the net with just two shots from 14 on target as Nicky Maynard grabbed the winner for the hosts.

Wanderers were leapfrogged by Tranmere who drew 1-1 with leaders Cambridge. Cheltenham stay second but could only draw by the same scoreline with bottom club Grimsby. Forest Green’s promotion hopes were harmed with a 2-0 defeat at home to Salford though the club in Gloucester remain only two points off third place.

Strugglers Oldham won 4-1 at Crawley, Harrogate lost at home 2-0 against Port Vale, Colchester and Barrow drew 1-1 as did Stevenage and Bradford and while Leyton Orient’s match with Walsall and Exeter’s clash with Mansfield each ended goalless.

x
Suggested Searches:
Tyson Fury
Manchester United
Marcus Rashford
Lewis Hamilton
F1
Air Jordan
More
football
Quad Dream Remains Alive As Pep And Man City Advance To Champions...
Pep Guardiola reached his first Champions League semi-final with Manchester City after coming from behind [ ... ]
football
Manchester City Ready To End Champions League Quarters Curse...
If Manchester City are to win a historic and unfathomable quadruple this season, they must break their [ ... ]
football
Europa League Quarter-Finals: Everything You Need To Know Ahead...
The Europa League is reaching its final stages as we look forward to the second leg of the quarter-finals, [ ... ]
football
Breathtaking PSG v Bayern Munich Is Why The Champions League...
Utterly breathtaking. If the first leg was an absolute celebration of football the second leg more than [ ... ]
football
Manchester United, City, PSG… Where Could Harry Kane End Up...
Harry Kane has 217 goals in 329 games but still has no silverware to show for his stunning goalscoring [ ... ]
football
Chelsea's Time Is Now, Insists Thomas Tuchel Ahead Of Porto...
Chelsea manager Thomas Tuchel has urged his team not to ‘get lost in dreams, hopes and speeches’ [ ... ]
football
Ten Years Of The Women's Super League Proves Lightning Progress...
On the 13th April, 2011, a new era of women’s football began as the very first game of the Women’s [ ... ]
football
Brighton's Blue Monday Curse Continues But Point Against Everton...
Brighton’s Blue Monday curse continued at home to Everton as their failure to win in the Premier [ ... ]
football
West Brom Keep Slim Survival Hopes Alive With Impressive Win...
West Brom have a mountain to climb but still have a chance of pulling off a great escape to avoid relegation [ ... ]
football
Champions League Quarter-Finals: Everything You Need To Know...
The Champions League quarter-finals promise to be high on entertainment with Bayern Munich and Liverpool [ ... ]
football
Forest Green Rovers Or Chelsea: Where Do Female Managers Fit...
Dale Vince, chairman of Forest Green Rovers is used to doing things differently. Owner of the only vegan [ ... ]
football
La Liga Title Looms For Real Madrid After El Clasico - European...
El Clasico could have proved pivotal in a three horse La Liga title race, Leipzig closed the gap on [ ... ]
football
Alexandre Lacazette And Gabriel Martinelli Score As Arsenal...
Arsenal moved back into the Premier League top ten on Sunday with a 3-0 victory over Sheffield United [ ... ]
football
Edinson Cavani Ignores VAR Drama To Clinch Man United Victory...
Tottenham versus Manchester United was always going to be a game packed with quality and entertainment. [ ... ]
football
Jesse Lingard Fires West Ham To A Point Off Third With Brace...
Jesse Lingard is on fire right now. Spearheading West Ham’s pursuit of the top four, he is the [ ... ]
football
Super-Sub Allan Saint-Maximin Inspires Newcastle Comeback Victory...
Allan Saint-Maximin inspired Newcastle to a crucial 2-1 comeback victory at Burnley on Sunday which [ ... ]
football
In Pulisic, Mount And Havertz, Have Chelsea Found Their Perfect...
Thomas Tuchel may just have found his perfect front three, made up of two number tens and one natural [ ... ]
football
Leeds United Prove Bielsa Right As Manchester City Prioritise...
Leeds United. All out attack. Naive. No game management.  You know what? You can absolutely stuff [ ... ]
football
Premier League Fixtures: Everything You Need To Know For This...
We have wall-to-wall Premier League football to look forward to starting on Friday night, right [ ... ]
football
Why Does Manchester United's Europa League Success Still Feel...
Manchester City and Borussia Dortmund went toe-to-toe on Tuesday as Liverpool were torn apart in Madrid, [ ... ]
football
Mikel Arteta Hoping 'Big Slap In The Face' Will Have Positive...
Mikel Arteta will be desperate to see a reaction from his players when Arsenal line up against Slavia [ ... ]
football
Chelsea Return To Winning Ways Against Porto And Notch Another...
It seems Chelsea’s 5-2 defeat at home to West Brom on Saturday was nothing but a freak result [ ... ]
football
History Shows The Champions League Can Give Imperfect Chelsea...
Briefly, and perhaps only briefly, chaos reigns at Stamford Bridge once more. The five goals they conceded [ ... ]
football
Liverpool's Champions League Hopes In Tatters As Defensive Woes...
One wonders what Virgil Van Dijk must have made of that. The heavy metal football we have seen under [ ... ]
football
Jamie Carragher On Whether Steven Gerrard Could Be The Next...
Having taken Liverpool from mid-table to Europe’s top table, and guided the club to a sixth European [ ... ]
football
Alexander-Arnold Facing The Best After England Omission... And...
It was gloriously clever quick-thinking. Trent Alexander-Arnold cheekily took a quick corner catching [ ... ]
football
Why Erling Haaland Transfer Could Hinge On Manchester City Clash...
When you’re trying to hold onto one of your star players, one of the most potent strikers on the [ ... ]
football
West Ham Move Into The Top Four As Jesse Lingard Inspires Victory...
Judging by West Ham’s barnstorming start at Molineux, they had been chomping at the bit to get [ ... ]
football
Wasteful Everton Made To Pay For Home Woes Again As Palace Net...
This was an all too familiar feeling for Evertonians this season, dropping more points at home against [ ... ]
football
Atletico Madrid Loss Gives Barcelona and Real Hope - European...
Real Madrid and Barcelona have been given hope in La Liga after Atletico's defeat at Sevilla but [ ... ]