It is a rare thing for teams to win every single game in a major international tournament, and a single group setback can quickly be forgotten in the grand scheme of things when trophies and winners’ medals are being handed out.

But what England’s 0-0 draw with Scotland at Wembley in Group D of Euro 2020 tells us right now is that Gareth Southgate’s side are far from the finished article.

Their 1-0 victory over Croatia on Sunday showed a maturity and savviness that has often been missing in the Three Lions’ game in the past. Yet the inability to break down a well-marshalled opposition in a big-game atmosphere on Friday belies the confidence of many England fans that ‘Football’s Coming Home’ this summer.

Southgate went for only a couple of minor tweaks at full-back, but the difference in tempo between the two games could have done with a more altered approach than England offered.

They had more than enough decent chances in the first half to have given themselves a cushion. John Stones got up too early at a right-wing corner, hanging in the air too long and skewing his clear header against the post. Moments later Mason Mount stabbed wide of the near post as England attacked down the left.

At the other end Jordan Pickford did superbly to keep out a low effort from Stephen O’Donnell and soon after Harry Kane was beaten by the skip of the ball off the wet surface as he launched himself into a diving header.

But it all had led to nought for the home side, and by the early part of the second half the lack of mobility and urgency in England’s play was giving their old enemy more and more confidence by the minute. 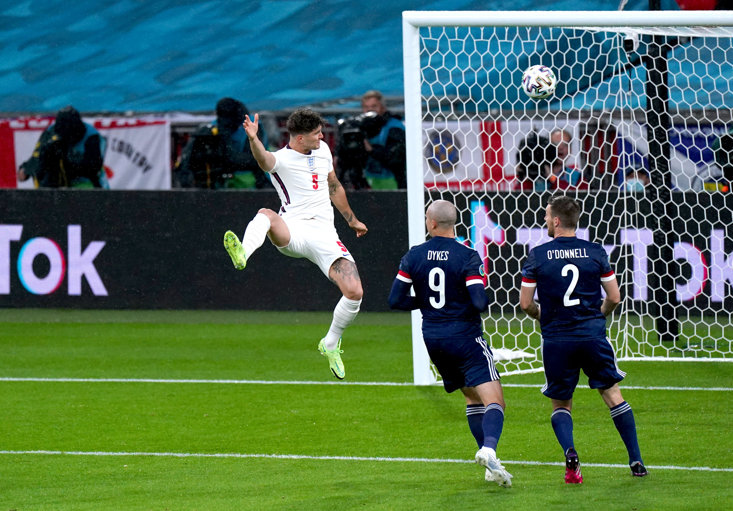 STONES SHOULD HAVE DONE BETTER WHEN HEADING AGAINST THE POST

Kane’s inability to really make the most of the three attacking midfielders behind him made the 4-2-3-1 far less effective than it might have been. Whether through his own fault or not, the captain ended up neither providing a totem figure up front nor linking on the turn with onrushing teammates beating a path beyond him. England’s attack was disjointed at best, and it was little surprise that Kane didn’t make it to the end before being replaced by Marcus Rashford.

As Scotland grew in belief and were boosted by greater possession, they caused England increasingly more bother. Che Adams’ shot on the turn needed to be blocked and a Lyndon Dykes effort from a corner needing clearing off the line by Tyrone Mings. This was not the routine victory many England fans had predicted.

England now head into Tuesday’s final group game against the Czech Republic needing to win to top the pool, and while second spot might actually lend them a more favourable route through the knockout stage, what they may need more is the injection of confidence that only a victory can provide.

While the likes of Italy, Portugal and the Netherlands have found their way past stubborn opponents, England have yet to prove they can deliver in just such a situation. This is still a work in progress.