On a shining Sunday afternoon in Nottingham, Premier League football returned as Nottingham Forest won their first home game back in the top flight with a 1-0 victory over West Ham United.

Summer signing Taiwo Awoniyi scored the decisive goal and the noise that echoed around the City Ground when it crossed the line was something truly special, a roar that had been lying years in waiting.

It was a game full of drama. Two disallowed goals, two efforts denied by the crossbar and a penalty - quite a Premier League return for the City Ground. While it was full of drama, it was the perfect way to kick off Forest’s home campaign as they will know how important home form will be for them this year as they look to solidify their place in the Premier League.

Steve Cooper’s side looked compact and while they did suffer a few scares from the Hammers, they put bodies on the line to secure their first three points of the season. The crowd behind them was a huge boost in the second half when the visitors looked a lot more threatening and with the decibels inside the City Ground raised now that Forest are back in the big time, that is certainly going to play a huge part in the Tricky Trees’ enjoying as much success as possible on home soil. 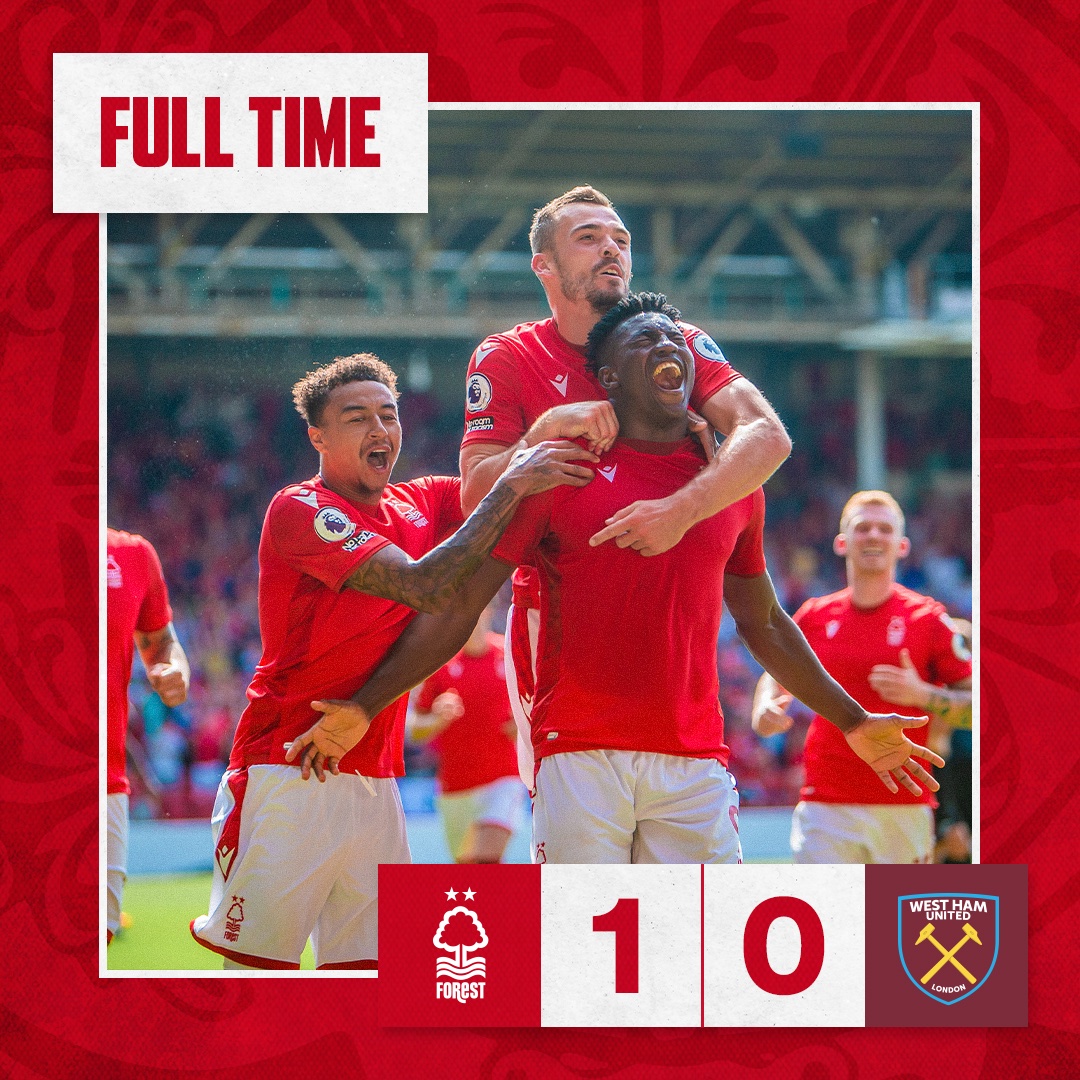 At the beginning of the game, as soon as Jesse Lingard touched the ball for the first time he was immediately met with boos from the away end while Michail Antonio was met with some boos from the home crowd.

The hosts started brightly and Neco Williams was able to make some great passes towards Awoniyi who came close with a header that flew just wide of the post. Lukasz Fabianski was called into action to deny Williams at the near post before West Ham went up the other end and Said Benrahma put the ball into the back of the net, only to be ruled out for a foul by Antonio in the build-up.

Moments later the deadlock was broken as Awoniyi scored Forest’s first top flight goal in 23 years, while opening up his account for the club. It was by no means an ideal first goal as the ball ricocheted off the forward after a lapse touch by Ben Johnson and just trickled into the net.

West Ham came out the blocks quickly in the second half as Pablo Fornals rattled the crossbar with a shot from outside the box and Dean Henderson did well to deny Tomas Soucek’s rebound. And while the Hammers looked to be on the ascendancy, Forest put the ball into the back of the net for a second time as Brennan Johnson lofted the ball over Fabianski, only to be overruled by VAR for offside.

Benrahma was denied by the woodwork from a free-kick before his side were awarded a penalty after Scott McKenna diverted a Soucek shot with his arm. The visitors couldn’t capitalise as Declan Rice’s effort was saved by Henderson. Williams was next to deny a destined goal as he put his body on the line, literally, to deny Kurt Zouma’s header as Henderson was beaten.

Eight of Forest’s new signings started the match while a further six have also joined the club with the latest recruits being Emmanuel Dennis from Watford and Cheikhou Kouyate from Crystal Palace. And the recruitment drive doesn’t seem to be stopping there as the club are in advanced negotiations with Brighton & Hove Albion striker Neal Maupay and Lyon’s Houssem Auoar, while they are close to completing a deal for Atalanta midfielder Remo Freuler.

There is plenty of risk of having enough time for so many new players to gel when the season has already begun but with three points after two games it has been a positive start for a club who have dreamt of this day for over two decades.