Dale Vince, chairman of Forest Green Rovers is used to doing things differently. Owner of the only vegan football club in Britain, the first UN certified carbon-neutral football club in the world and with plans to build the world’s first stadium built entirely from wood - it’s clear that Vince has no issues with breaking new ground.

Now, after parting company with long-term manager Mark Cooper, Vince could be looking to make history once again. "I think we'll take a new direction in our recruitment. Maybe we'll break some new ground,” he told the BBC.

"We'll recruit the kind of person perhaps that hasn't been recruited before to be a head coach.” In a follow-up question Vince was asked if he was hinting at appointing a female head coach.

"I don't want to hint, but it could be. It is missing in men's football, but so are BAME [Black, Asian and minority ethnic] head coaches. Everything is possible with us, because we don't come at this in any preconceived way or in a way it has always been done."

So, who are the potential candidates to make history in English football? Well, without a doubt, the greatest female manager in the women’s game at the moment is Chelsea boss Emma Hayes. Her Chelsea side are into the final four of the Champions League, on course to win every trophy available to them this season, and also lead the way in the WSL.

But, having more than proved her managerial credentials in the women’s game, where would she fit in when it comes to men’s football? Clearly she would be a pioneer in the sport, but would it really be a smart move for the 44-year-old to swap a well-paid job at the top of the women’s game, where her side compete for the biggest trophies in Europe, for a club currently in the League Two play-offs?

When she was linked with the vacant League One AFC Wimbledon job last month, she was less than flattered with the link, stating they couldn’t afford her. "Absolutely not. First of all, I am the manager of Chelsea. I manage and represent elite, world-class players and this for me is an amazing job. I've spent the last nine years cultivating all my energy into it. 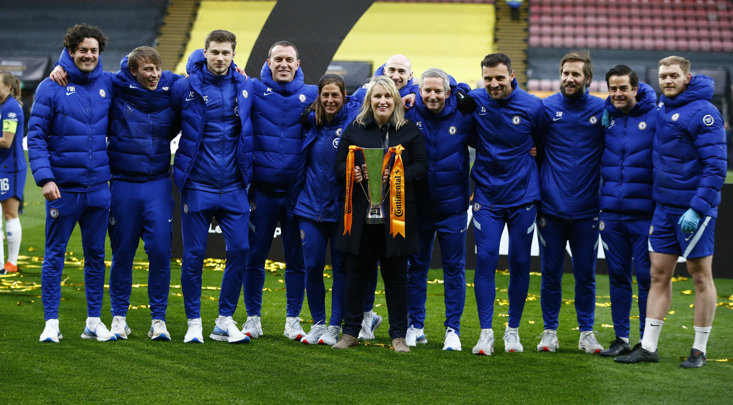 "I'm not looking for another job. I'm blessed with working with wonderful humans day in, day out, and I think it's important for me to say this: when the football world is ready to adhere to the diversity codes, so that BAME communities plus women get the opportunities in men's football, I will see that as a step forward.

"I don't know why anyone would think women's football is a step down [in comparison to men]. The football world needs to wake up. While the game is played by a different gender, it's exactly the same sport."

Manchester United manager Casey Stoney could be another possible candidate, as could former England boss and current Brighton manager Hope Powell. However, the question does arise where female coaches fit into the English pyramid. Hayes, for all her qualifications and qualities is probably right to turn her nose up at jobs such as the Wimbledon one, and deserves a shot higher up the pyramid.

However, because this has never been done before, it will be seen rightly or wrongly, as a huge risk for any club to take. It will take somebody like Dale Vince, to give any woman the opportunity to prove herself as the manager of a men’s team before more clubs follow suit. The ‘right person’ should get the job, but given no female has been given the opportunity to perform in charge of a men’s team, how can we possibly know they aren’t that right candidate? Gender has absolutely no impact on managerial performance.

Something needs to be done, and one club needs to break the mould. Forest Green have pushed the environmental boundaries and now look to be trailblazing once again in terms of gender equality. Hopefully in ten year’s time, the Premier League and Football League dugouts will be a whole lot more representative of Great Britain as a society, with BAME and female managers given the same opportunities as everybody else.