6-2,6-2. The Australian Open may be on, but that isn’t a tennis score. That is Fulham’s last two results in the Championship while before that, they scored seven away at Reading, the second time they have scored seven on the road this season. Marco Silva’s men aren’t just leading the division by five points, but they are making their opponents look silly and their goalscoring record puts them above some of the elite clubs in Europe.

In league football across the top two divisions in England, France, Germany, Italy and Spain, no side comes close to Fulham’s total of 70 goals. With their thrilling brand of football, the Cottagers have outscored the likes of Bayern Munich, Real Madrid and Liverpool and Fulham fans have been thrilled so far this term by this free-flowing football.

Now of course, the man who has grabbed most of these goals, and most of the headlines, is Alexandar Mitrovic. After 26 league matches, he has bagged a phenomenal 27 goals and seven assists and is well on track to not only beat - but smash through - Ivan Toney’s record of 31 set just last season.

He didn’t even score against Birmingham City in their most recent 6-2 win, which just goes to prove the outrageous attacking quality Silva has at his disposal. Fábio Carvalho bagged twice while Harry Wilson is the top creator in the division, having hit ten assists to go with his eight goals. Neeskens Kebano has contributed with eight goals of his own and in a fluid 4-2-3-1 formation, the front four led by the Serbian, have caused chaos amongst second tier defences. 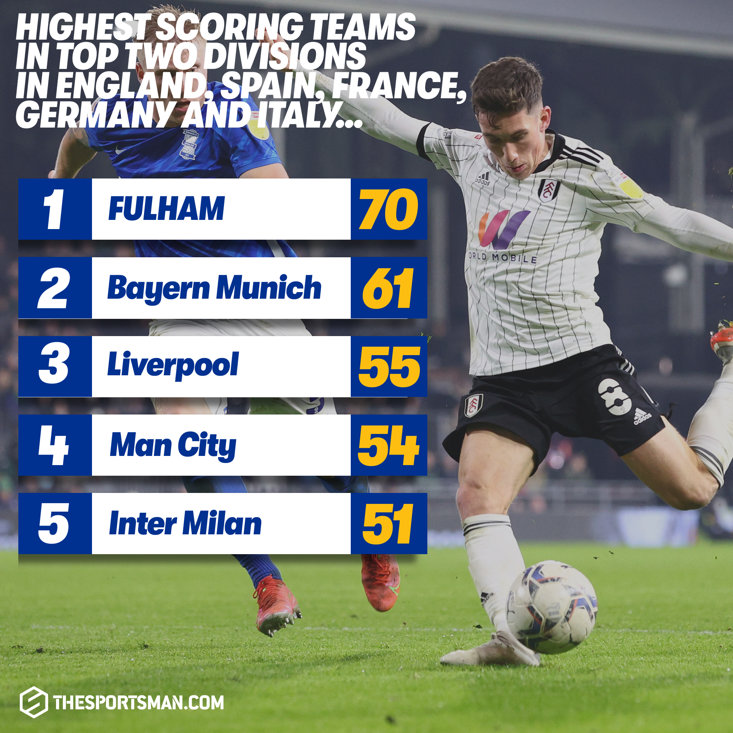 They are currently averaging 2.69 goals every game which is only truly comparable with Pep Guardiola’s Centurions that averaged 2.78 GPG as they scored 106 goals over a Premier League campaign, while Man City this season are on 2.45 goals per game - showing just how lethal Fulham have been. In fact, Silva's men are just the 6th team in senior English league history to score 6+ goals in three successive matches, after Small Heath 1893, Plymouth 1925, Chester 1933, Everton 1954, and Chelsea in 2010, although the Blues achieved that across two seasons.

As we’ve already established, Fulham are almost unstoppable in front of goal and they now look well on track to secure an instant return to the Premier League. They also look certain to pick up a few records on the way as Mitro is sure to break the individual goalscoring record, while the most goals scored by a Championship team was when Reading scored 99 in 2005-06.

Given Fulham have already scored 70, they will surely hit the 100 mark with 20 matches to go. It isn’t unfeasible that they could hit 120, and Mitrovic himself could score 40. Next up are Stoke City. Be afraid, be very afraid.