Major League Baseball has jointly announced in agreement with the Major League Players Association "significant changes" to its drugs policy, including the removal of marijuana from its list of banned substances.

Marijuana, also known as weed, cannabis or ‘the Devil’s lettuce’ will now be treated the same as alcohol. MLB players will be referred to treatment centres and programs should problems with either alcohol or marijuana arise. However, players will also not be punished should they fail to adhere to treatment programs as advised. Those who test positive for cocaine and designated opioids will also be supported and will be referred to the Parties' Joint Treatment Board.

The measures will come into force ahead of 2020 Spring Training, and marks a giant leap forward in the sport: instead of coming down hard, athletes will be supported with "a particular emphasis on protecting Players from lethal and addictive substances, and providing effective and confidential care and support to Players who need it".

The policy alterations come in the wake of the tragic death of Tyler Skaggs, a 27-year-old pitcher for the Los Angeles Angels who passed away under the influence of alcohol, fentanyl and oxycodone intoxication in July.

MLB Communications
@MLB_PR
Today, @MLB and the @MLB_PLAYERS jointly announced significant changes to the Drug of Abuse provisions of the Joint Drug Prevention and Treatment Program. 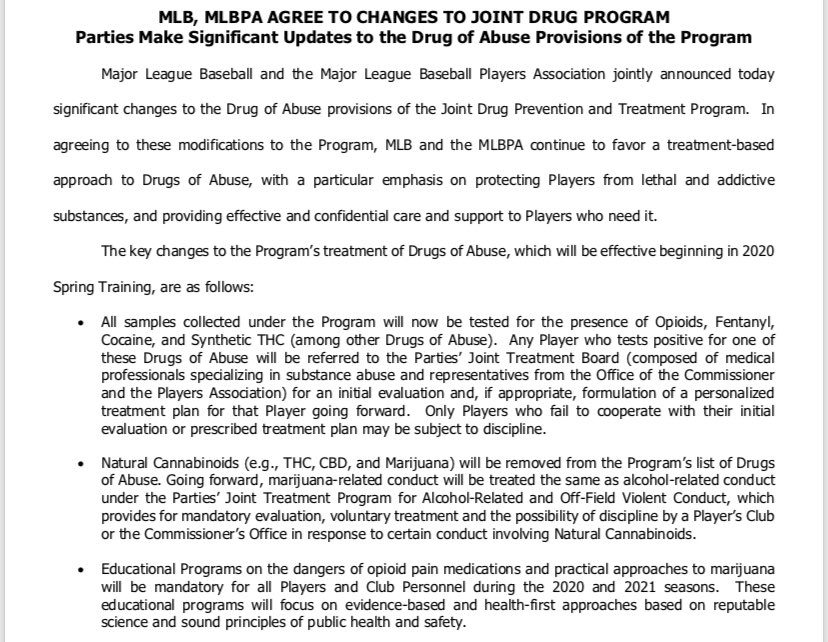 “It is our hope that this agreement - which is based on principles of prevention, treatment, awareness and education - will help protect the health and safety of our Players.

“I commend the Players Association and its membership for their thoughtful approach to this important issue. We also appreciate the support and guidance offered to us by the Office of National Drug Control Policy. It is our collective hope that this agreement will help raise public awareness on the risks and dangers of opioid medications and contribute positively to a national conversation about this important topic."

Tony Clark, Executive Director of the MLBPA, supported the motion by saying: "Players are overwhelmingly in favor of expanding our drug-testing regimen to include opioids, and want to take a leadership role in helping to resolve this national epidemic."

In the statement White House Office of National Drug Control Policy Director Jim Carroll, known as the 'U.S. Drug Czar', said: "Millions of Americans struggle with substance misuse and need help. We applaud the efforts of both Major League Baseball and the Major League Baseball Players Association to prioritise treatment over punishment. This historic agreement is an example of how we can all work toward a common goal and save more of our friends, family members, and neighbours from dying of a drug overdose.

“By coming together, the parties are implementing positive change that has the potential to save lives."

Marijuana is now only fully illegal in three of the 50 states in the USA - Idaho, Nebraska and South Dakota - with varying degrees of legality between recreational and medical use across the rest of the country.