Football
News
The Leicester striker has scored nine goals against Pep Guardiola, more than any other player
Simon Lillicrap
09:05, 11 Sep 2021

When Pep Guardiola walks out the King Power tomorrow afternoon, he will come face-to-face with the striker that has tormented him more than any other in his career. Although a lot of attention will be on a certain Cristiano Ronaldo as he makes his Old Trafford return, Jamie Vardy has actually caused Guardiola more problems over the years and leads the scoring charts with nine goals past the Spanish manager.

One of the greatest managers of all time will be desperate to stop Vardy scoring his tenth goals against his Manchester City side, but what makes this record more remarkable is that obviously, and unlike Ronaldo, Vardy never played against Pep’s Barcelona or Bayern Munich teams.

In fact, when Pep Guardiola was lifting the Champions League with Lionel Messi and co in 2009, the Englishman was playing for Stocksbridge Park Steels in the Northern Premier League division. Who would have predicted that their paths would have crossed so many times since then?

Vardy’s pace and direct running has constantly caused Guardiola’s sides problems, in all competitions. In his first match against Manchester City under their new boss, having just inspired Leicester to the most unlikely of Premier League titles, Vardy scored a hat-trick as the Foxes ran out 4-2 wins. This was a brutal welcome to the Premier League for Pep. 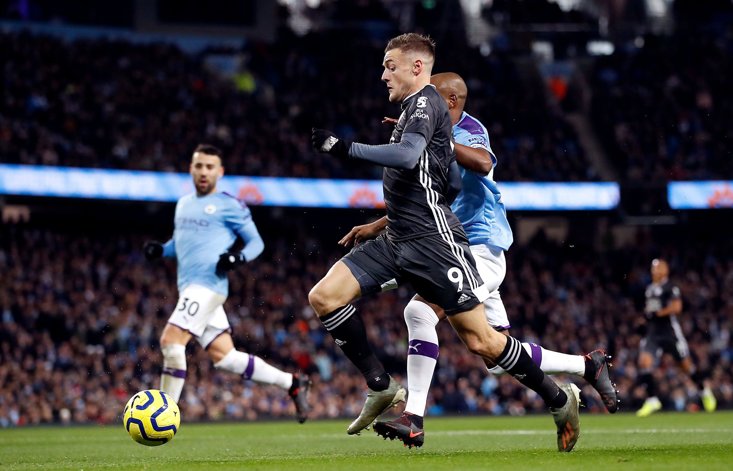 With that hat-trick back in 2016, Vardy became only the second player in history to score three in one game against a Guardiola-managed team. The other? Lionel Messi. Perhaps surprisingly, the Argentinian superstar hit three past City in that season’s Champions League as the greatest of all time came back to haunt his former boss.

With two goals at the Etihad across the next three seasons, it seemed as if his powers were waning, until he showed up in Manchester and scored yet another hat-trick, including two penalties, in a 5-2 thrashing that changed Man City’s season. After that loss they went on a 28 match unbeaten run that essentially clinched the title for Guardiola, but Vardy had proven himself once again to be a thorn in City’s side.

In a slight statistical quirk, since that hat-trick in 2016, every league goal Vardy has scored against Manchester City has come at the Etihad, rather than at home, but this does make sense when you think about how the two sides set up. Man City are the perfect side to counter when playing their possession-based style at home, while they tend to sit a little deeper away from Eastlands.

His last home goal against them came in the 2017/18 EFL Cup quarter-final, and Vardy has only scored more goals against Arsenal (11) than Man City (9). Ronaldo’s record is impressive also, and one he will be looking to add to this season, but he has only scored seven times against Pep in all competitions, and he has never played against his Manchester City team.

Heung-min Son has seven goals against him, including three in that chaotic Champions League semi-final over two legs, while Mo Salah and Messi sit on four apiece. Leading a list of this calibre takes some doing, and Vardy would love to hit double figures this weekend against the manager who has been repeatedly haunted by the hard-working Englishman.

Jamie Vardy is 12/5 to score anytime against Manchester City with Betfred.